A habitat is the specific type of environment which is ideal for the existence and growth of certain plants and animals. Habitats or biomes are determined by the climate and geography of the region as well as the animals and plants inhabiting the area. Most animal and bird species are adapted to survive in specific habitats and cannot live in other types of habitats.

For example, walruses are adapted to live in marine habitats and cannot survive in desserts or other terrestrial habitats. Similarly, rattlesnakes cannot live in marine waters or arctic regions as they are adapted for warm terrestrial habitats like grasslands and desserts. Animals living in extreme cold habitats may migrate to warmer regions during the winter, coming back to their original habitats again during the warm seasons. 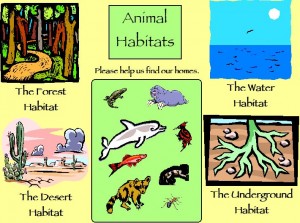 This article discusses about the different types of habitats and the animals living in them.

Grasslands are another type of habitat with a wide variety of animal and bird species. There are 2 kinds of grassland habitats, tropical and temperate. African savanna is an example of tropical grassland with animals like lions, giraffes, elephants, zebras and rhinos living in this area. Temperate grasslands are home to animals like deer, gazelle, mice, rabbits and various snakes.

The rainforest habitats are divided into several layers or strata from the surface of the soil to the forest canopy.

Forest Floor: The bottom layer of this habitat is home to animals like okapi, tapir, Sumatran rhinoceros, western lowland gorilla as well as various amphibians, reptiles and insects.

Deserts are wide arid regions with little rainfall and little or no vegetation. Animals living in the desert habitats are adapted to extremely hot and humid weathers and can survive without water for long periods of time. They have special adaptive features for utilizing the little water available in their habitat range. Coyote, kangaroo rat, jack rabbit and various species of lizards are some of the common dessert animals.

Mountain habitat can be extremely harsh with low food availability and very cold climates. Many animal species have developed special adaptive features to survive in this type of habitat. These include mountain goats, mountain lions, big horn sheep, antelopes and various bear species.

Freshwater accounts for around 3% of the water on earth. However, only 0.014% of the total freshwater exists in the form of lakes, rivers and swamps as surface water.

Animal species living in this type of habitat requires special adaptive features to cope with the water flowing continuously in the same direction. Water bodies like rivers, streams and springs are home to a wide range of animals, birds and fishes such as river otter, dolphins, river turtle, American crocodile, whooper swan, black-throated divers, mallards and red-bellied piranha.

This type of biome is ideal for a wide range of animal species. Many of these water bodies have self-contained ecologies which may even turn them into evolutionary microcosms.  Salmon, trout, pirarucu, common toad, great crested newt, kingfisher, greater flamingo and platypus are some species that inhabit these freshwater habitats.

Around 71% of the surface of the Earth is covered by oceans. The evolution of marine life began approximately 3 billion years before terrestrial life. Still, there is lack of research and information regarding the ocean habitats and their inhabitants.

The open ocean refers to the sunlit uppermost layer of ocean beyond continental shelves. This type of habitat is sometimes referred to as “marine dessert” due to the lack of nutrients for supporting life compared to the deeper waters. Animals found in the open oceans include blue whale, harbor porpoise, narwhal, black-browed albatross, olive ridley turtle, sharks, manta ray, flying fish and salmon.

Coral reefs can be defined as underwater structures built from calcium carbonate secretion of corals. Majority of these reefs are constructed from stony corals, which consist of polyps clustered in groups. Coral reefs are home to numerous marine species including common black-banded sea kraits, frogfish, leafy and weedy sea dragons, starfishes, gobies etc.

This habitat constitutes of the deepest ocean layer below the continental shelves. There is no sunlight and no algae or plant growth in the dark depths of the ocean. Animal species living in this habitat have numerous special adaptive features to survive as the deep ocean does not support the normal food chain. Anglerfish, lobe-finned fishes, ray-finned fishes and various sharks are found in the deep oceans.