Whooper Swan is a large, migratory birds. It is considered to be the most elegant one in the swan family. Its common name refers to the loud “whooping” calls it makes. Earlier the Whooper Swan was called Elk.

Find out here how this elegant swan looks.

Color: It is white in color. Its black bill has a large triangular patch of yellow. Its legs are black. The Juveniles have greyish brown plumage and their bills come in a color combination of pink with black. The eyes are dark brown in color.

Shape: They have broad and flattened bill, waterproof feathers and webbed feet. 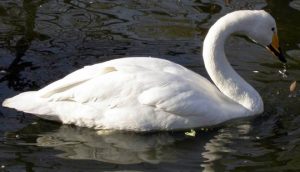 They are mostly found in freshwater wetlands and ponds. Many swans also live near the coasts and quiet rivers. They also inhabit farmland, flooded grassland and estuaries. They spend the winters in low and open farmland.

They are migratory birds and migrate a long distances to breed.

The Whooper Swan has certain behaviors which are as follows :- 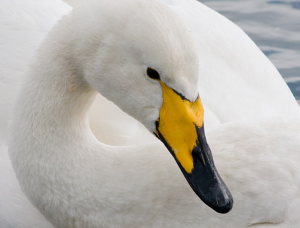 Despite their heavy body they are powerful fliers. They fly silently. 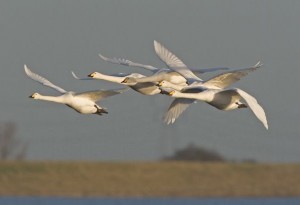 New born cygnets are mainly lost to herons, turtles, pike and large perch. Adults do not have many predators due to their habitat condition, but sometimes when other large aquatic creatures invade their comfort habitats then they fall preys to those predators.

This huge and amazing swan has the following adaptive features.

The Whooper Swans breeds from mid may in well demarcated areas. They prefer to breed in wetland areas.

The Whooper Swan reaches its sexual maturity at the age of 4 years. The Whooper Swan lives in pairs for life. The mates perform courtship displays with male and female facing each other with half opened wings. Each bird alternatively ends and extends the neck accompanied with loud trumpeting calls.

Males are very active in building nests. The males protect the territories during the nesting period. The female lays 4-7 eggs and sits in it. The gestation period lasts for 5-6 weeks. The parents moult after breeding and leave the place in flocks or small family. Adults remain flightless for about 30 days after breeding.

The cygnets can fly only after 120 days since birth. Both the parents take care of the cygnets.

The Whooper Swan lives approximately up to 26 years.

Whooper Swans are listed in the category of “least concern” by the IUCN.

Find out some very interesting facts about this wonderful and elegant swan species.

Here are some images of  Whooper Swan. 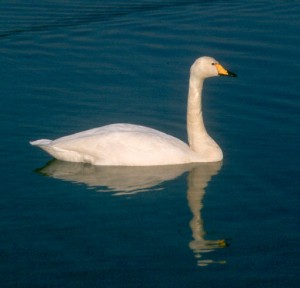 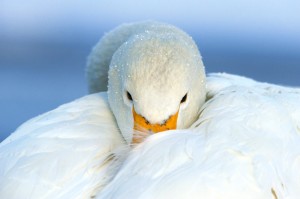