The Sumatran Rhinoceros (Sumatran Rhino) is the world’s most endangered species of rhinoceros. They are known for their hairy body and double horns, for which they have also got their other names – hairy rhinoceros, woolly (wooly) rhinoceros, and Asian two-horned rhinoceros. They are a rare member of the family Rhinocerotidae, the only extant species of the genus ‘Dicerorhinus’, and one of five extant rhinoceroses. Although they have a large body, nonetheless, they are the smallest among all the rhino species. The Sumatran rhinoceros is an elusive animal, and because of their rarity, the details of its life history are scarce. 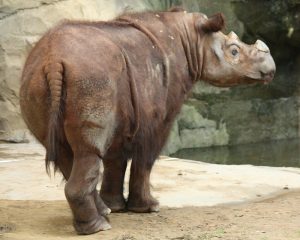 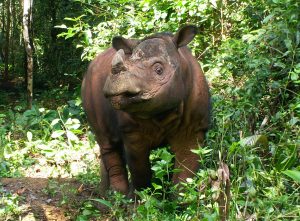 Fur/hair/coat: Most of its body is covered with a coat of reddish-brown hair, which often turns black as the animal grows older.

Horns: Like both the African species, this species has two horns, with the larger one being the nasal horn that is typically 15–25 cm (5.9–9.8 in). The posterior horn is typically a stub that may grow up to 3 inches (10 centimeters) in length. However, in most cases, it is generally a hump. 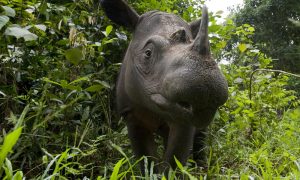 Skin: They have a coarse skin type typical to the rhino species, but it is soft and pliable. The color of the skin is rusty to reddish-brown. They have unique skin folds with two distinct folds in the skin circling the body behind their anterior legs and before the posterior legs. Their neck folds are lesser and so are the folds at the base of their legs. Although, the skin of this species is fairly thin: about 10-16 mm.

Eyes: Their eyes are small with wrinkles around them.

The Sumatran rhino lives for 30 to 45 years, which is almost the same like most other rhino species.

While their historic range was throughout Myanmar (Burma), Thailand, Malaysia and the Indonesian islands of Sumatra and Borneo, and rarely in Northeast India, presently, these rhinos are found in several scattered National Parks in Malaysia, Sumatra, Indonesia, and Borneo, including Bukit Barisan Selatan, Gunung Leuser, Way Kambas, Taman Negara & Tabin Wildlife reserve. 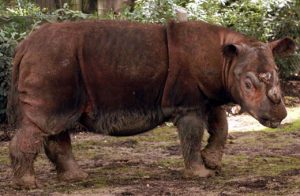 Habitat: Where do Sumatran Rhinos live

The Sumatran rhinos are scattered throughout the tropical bush lands, the grasslands, and the savannas. The species occurs mostly in the mountainous regions nearby water sources. 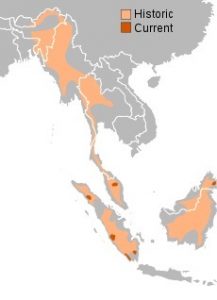 The Sumatran rhinos are shy. They usually live in the deep greens living a solitary life, except during mating season or while raising the young. Despite being heavy creatures, they have the ability to run fast.

These creatures mostly feed in the morning or around dusk and spend much time in wallowing all day. They exhibit seasonal movements, and move uphill during lowland floods, and come back again to the lowlands in the dry season. During summer, they would often dig or deepen their own pool of mud and remain in the muddy water.

Surprisingly, the Sumatran rhinos are vocal and use a variety of sounds to communicate amongst themselves. They mostly emit whistling or whining noises during interaction. 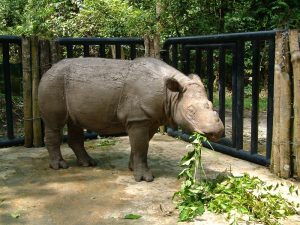 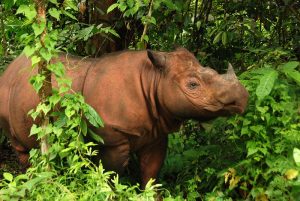 Diet: What Do Sumatran Rhinos Eat

The rhinoceros is herbivorous. They generally live on fruits, leaves, twigs, bamboos, and barks. Sometimes they also consume crops. But this species is usually a browser and opportunistic feeder that would thrive in a wide variety of diet. Dung tests made by researchers have shown that they feast upon more than one hundred species of plants.

The male rhino reaches its sexual maturity by age seven years, while the females attain puberty much faster at 4. Often, the young Sumatran males are quite aggressive towards the females. They are known to either injure or kill them during mating and courtship.

While studying sexual behavior in captivity, it has also been noticed that, the common signs of estrus in these creatures is the increase in frequency of spraying urine, tail lifting or dangling, and physical contacts with the anus and the genitals. During intercourse, the males exclusively exhibit mounting behavior common in most other mammals.

The female gives birth to a calf every 4 to 5 years, after a gestation period of approximately 15-16 months. 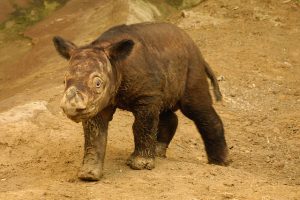 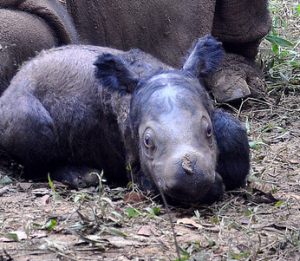 Most births of the baby rhinos take place during the period of heaviest rainfall, between October and May. The calves are often attacked by wild dogs or tigers and they will continue staying with the mother until they are 16 to 17 months old. The baby Sumatran rhinos are born with a dense covering of body hair that turns copper brown in young adults. 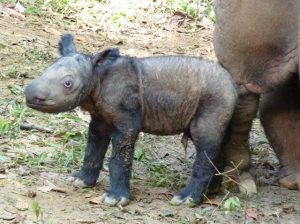 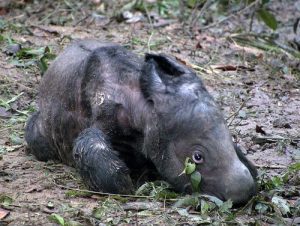 Owing to their large size, the Sumatran rhino has no known predators other than the humans. However, as mentioned, the calves are vulnerable to the large cats like tigers and wild dogs.

The present population of the Sumatran rhino is estimated to be around 275. Their numbers have got halved over the last few years. However, this decline in their population appears to have slowed, with the count is seemingly stabilizing in most of the core areas. 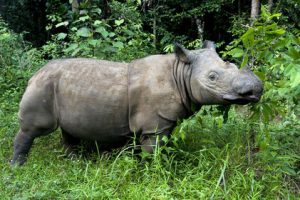 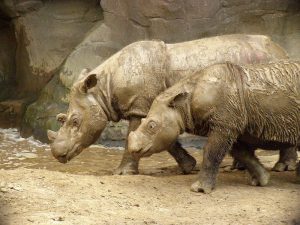 The Sumatran rhino is a critically endangered species. The IUCN 3.1 has categorized them under the ‘CR’ (Critically Endangered) species list.