Black rhinoceros is a large mammal species belonging in the Diceros genus, found in the eastern and southern countries of Africa, including South Africa, Kenya, Zimbabwe, Mozambique, Namibia, Tanzania, and Zambia. 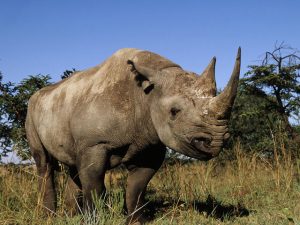 Skin: The black rhino, as indeed does all other rhinoceros species, boasts a gray-colored and thick layered skin. This kind of armor-like skin helps to protect its wearer from sharp grasses and thorns.

Horns: They have two horns with the front one being longer than the other, growing up to a meter. The longest recorded black rhino horn was 4.9 feet (1.5 m) long. Some individuals may have a third shorter horn.

Both species have similar gray coloration as the word ‘white’ has actually been misinterpreted from ‘wide’. So, the two are often hard to distinguish. The primary difference is that the black rhinoceros has pointier lips while the white rhino has wider lips to aid it in grazing. Additionally, the black rhino also has relatively smaller skull.

There are five extant subspecies with the Chobe Black rhinoceros (D. b. chobiensis), found in Chobe Valley of Angola, Namibia and Botswana, the Uganda black rhino (D. b. ladoensis), found in South Sudan through Uganda into Western Kenya and Ethiopia, the Eastern black rhino (D. b. michaeli), endemic to Tanzania. The South Central (D. b. minor) and South Western (D. b. occidentalis) subspecies are found in countries across Southern Africa.

Other than the above, there are three other subspecies that have been driven to extinction. The Southern Black Rhinoceros (D b bicornis †), which used to be the largest of the subspecies, used to be found in abundance from the Cape of Good Hope to the southern parts of Namibia. The other two are the North-eastern Black rhino (D b brucii †) and the Western Black or West African Black rhinoceros (D. b. longipes †). 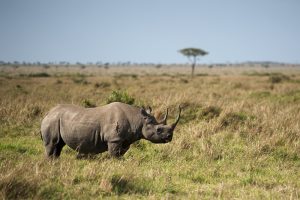 The black rhinoceros lives in habitats consisting of thick shrubbery and bush-land, with some woodlands about. They are not territorial in nature and often their home ranges change seasonally, depending on the availability of watering holes and food. The ranges of female rhinos are generally wider than that of their male counterparts, more commonly when they are accompanied by their young. Black rhinos of both sexes tend to have an area at higher grounds where they come often to rest.

Audible communicative methods generally include squeaking between adults. Characteristic breathing sounds are also used to warn predators and to put across their anxiety. Members of the species can identify each other as to their age and gender by their urine and stools.

Being herbivores, they browse and eat leafy plants, shoots, branches, fruits and thorny woody bushes. During the dry and arid season, they prefer leafy plants, as it serves to quench their thirst to an extent. Their diet includes a number of leaves and plants, depending on their availability, to meet their nutritional requirements.

Mating happens randomly at any time of the year, usually at a time that facilitates the birth occurring at around the end of rainy season. When in heat, the females leave dung piles as a means for a prospective male to follow and find her. When a male does find the pile they scatter and spread it all over the place so that a rival male cannot find the same female. Breeding pairs stay together for 2-3 days, during which period they mate several times per day with copulation lasting for about half an hour each time. 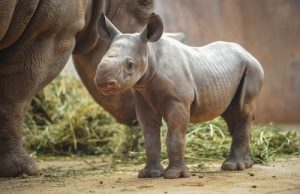 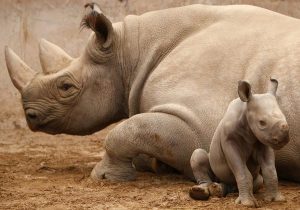 The gestation period for the black rhino is between 15-17 months after which a solitary calf, weighing between 80-110 lbs (35-50 kg), is born. The baby can follow its mother after 3 days and is subsequently weaned after 2 years. They stay together until the next offspring is born; sometimes female calves may stay with their mother till they are sub-adults.

Females reach sexual maturity between the ages of 5- 7 years, while males reach their mark at around 7-8 years.

In the wild, under natural conditions, the black rhino can survive up to anywhere between 35 to 50 years. 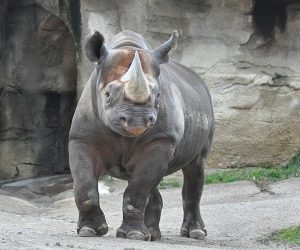 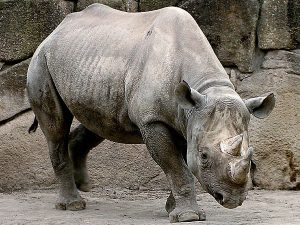 Because of its build and armor-like skin, rarely do natural predators like lions and crocodiles prey on the black rhinoceros. On occasions, a crocodile may drag one into the water to kill it, or a pride of lions may join forces to bring down a sub-adult.

The Black Rhinoceros is listed as ‘Critically Endangered’ by the IUCN 3.1.

They have been hunted and poached on for decades for their horns, and their population numbers have been reduced to mere thousands leading to more concerted conservational methods. Habitat loss is also another key factor behind the fall in their population.

How Many Black Rhinos are Left in the World

In the 2015 edition of the occasion, ‘Save the Rhino’ organization clarified that only 5055 black rhinoceros are left in the world. This number used to be close to 500,000 at the start of the 20th Century, and if the current down-trend is not addressed in earnest, the IUCN will have to declare the creature to be officially ‘extinct’ in the not-so-distant future. 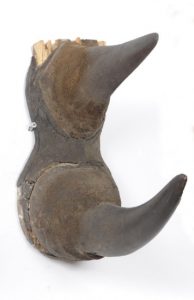