The Wood Stork is a large wading bird belonging to the “Ciconiidae” family. The bird was formerly known as Wood Ibis, although it is not a true ibis. They commonly inhabit the swamps and ponds of North and South America.

Height: The height of these birds range between 33 and 45 inches.

Color: These birds appear milky white when they are on the ground. The legs are blackish-gray in color with pinkish feet. The wings appear black when these birds are on flight. The head is brown in color and the face has a black coloration. 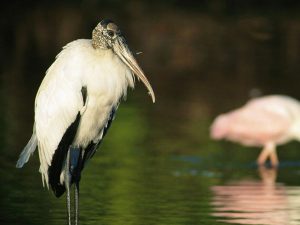 Bill: The bill is long and curved. It is yellowish black in color.

Tail: They have a short tail which is black in color.

Juveniles: The juveniles have a browner neck and a pale colored bill.

Here are some common behavioral patterns of these birds. 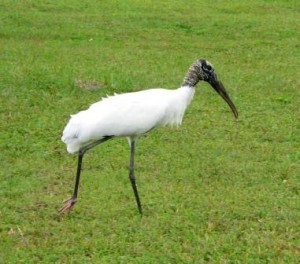 These birds are found in many areas of North America, Central America, South America and the Caribbean Islands.

Wood storks like to inhabit open wetlands and paddy fields. They love to make their nests above cypress trees in swamps and marshes as well as on mangrove trees.

These birds are not true migratory birds. They move from one place to another in search of food. When the food supplies become scarce, they will eventually move on to an area with greater availability for food.

These birds glide across the soaring sky with outstretched necks and legs. While in flight, they make sudden diving motions when they spot their prey from a distance.

These birds are normally very quiet as they have got no muscles connected to their larynx. Occasionally they make a croaking or hissing sound.

The eggs of wood stork birds are attacked by striped skunks, vultures, corvids and grackles. The nests are mostly attacked by raccoons. The adult birds are very rarely preyed on by American alligators. 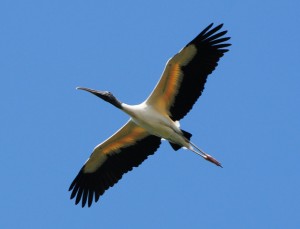 Wood storks have developed some potentially strong adaptations to catch their prey and survive from the grasp of their predators. Some of these adaptive techniques have been described below.

Wood storks breed during the hot months when the water of the ponds and lakes dry up.

Wood storks breed at a time when there is an ample availability of food. These birds require more than four hundred pounds of fishes during a breeding season to provide for themselves and their chicks. Hence they wait for the hot months when the lakes dry up and all the fishes have to move to smaller water bodies. This makes fishing a lot easier for these birds. 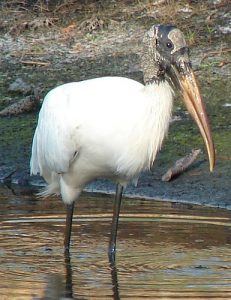 These birds make their nests out of twigs, vines and moss on top of tall trees. The females lay one clutch in a year consisting of 4 to 5 eggs. Both the parents incubate the eggs for a month. The chicks are born helpless and unable to fly. They weigh around 2 ounces. The survival of the young birds depends on availability of food and protection from predators. A single breeding season is considered to be successful when at least 2 chicks survive.

The chicks are fed almost 15 times daily for the first two months. After that they become capable to survive on their own. During these first months, the parents will keep close watch over the nest and take turns to hunt for food. The young chicks weigh almost 10 times their birth weight after 2 weeks and 25 times after 4 weeks. When the chicks are about 4 weeks, both parents regularly leave the chicks to hunt for food and this trend continues until the young birds leave the nests. The chicks may return periodically to obtain food from parents.

The average life span for these birds in the wild is almost 11 to 12 years. However, they can live up to 30 years in captivity.

Wood Storks are somewhat endangered in some places of United States like South Carolina, Florida and Georgia. However, this species is listed in the category of “Least Concern” by the IUCN.

Here are some interesting facts about these birds.

Here are some images of these beautiful storks. 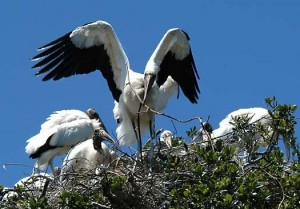 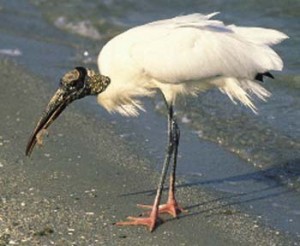