The Black-footed Albatross is a seabird belonging to the family “Diomedeidae”. It is resident of the North Pacific, it is one of the three albatross species that are found in the isolated tropical islands of northern hemisphere.

Here is a brief general description of these birds.

Length: The length of their bodies lies between 28 inches and 36 inches.

Wingspan: These albatrosses have a wingspan ranging between 6.2 feet and 7.2 feet.

Weight: The males and female birds weigh around 3.4 kilograms and 3 kilograms respectively.

Bill: The bill of a black-footed albatross has a curved tip.

Color: The bodies of these albatrosses are almost entirely covered with black or brown plumage. The adult birds have white markings below the eye and around the lower parts of the beak. As these birds age, the base of their beaks acquires a whiter shade. Some adults display white undertail coverts. The feet and beak of black-footed albatrosses are also dark in color. The older birds have light gray marks around their heads, backs and rumps. 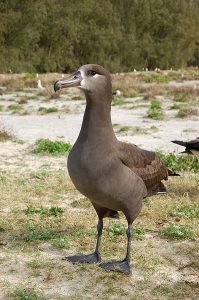 Sexual Dimorphism: The males are larger in size than the females.

These birds mostly reside in the northern Pacific Ocean regions, ranging across the Hawaiian archipelago, the China Sea, Japan and in the western parts of North America including California as well as Baja California in the south.

Black-footed albatrosses do not have any specific migratory season. However, they do migrate from time to time in order to breed or while they are searching for their food. Their migratory range spans across the Northwestern Hawaiian Islands of Kure Atoll and Kaula Island, the Japanese islands of Bonin, Tori Shima and Senkaku as well as the islands off Mexican coast, like in Isla Guadalupe. Although primarily a bird of the northern hemisphere, they have occasionally been observed in the southern hemisphere as well.

Black-footed albatrosses are mostly found in open sea waters as well as in low, flat islands.

Black-footed Albatrosses make squealing noises and shrieks while feeding themselves. These birds whistle, quack and groan during courtship. At other times, their call is a nasal tone of double-bray.

Black-footed albatrosses dynamically soar across the sky for long spans of time. 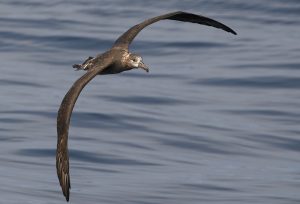 Here are some important adaptive features of these birds.

The breeding season for these albatrosses runs annually from November through February. 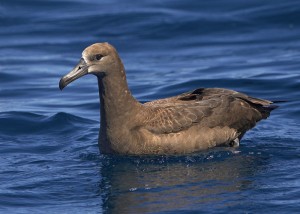 Like all albatross species, black-footed albatrosses are monogamous and form lifelong bonds with their partners. The male and female albatross spends at least two to three years together before finally deciding to mate; a behavior that evolved to develop trust between the birds. The long courting period helps to make it sure that the other bird is committed.

Black-footed albatrosses breed in colonies. The males arrive first in the breeding grounds around October and either establish their new territories or reclaim their old nesting site from the previous year. The mating takes place three weeks later when the females arrive. Prior to mating, black-footed albatrosses indulge in a mating ritual which involve coiling their necks, flapping their wings, shaking their heads and touching their bills.

Black-footed albatrosses build nests which are like hollow depressions in sandy grounds. The female lays one egg which is white in color with reddish brown specks. In case the egg is lost due to predation or other natural causes, the pair will not breed again until the next breeding season. Both the birds take turns to incubate the egg for around 65 to 68 days, after which the hatchlings are born.

The young birds are born helpless, covered with furry feathers and have their eyes open. Both the parents brood the hatchlings in turns; one of the parents handle brooding responsibilities while the other flies out in search for food. The young birds become ready to move out of the nest after about 2 or 3 months, but they prefer to stay with the parents for at least six months.

The chicks are fed a diet of squid oil and flying fish eggs. The squid oil is rich with fatty acids which help to sustain the chicks for long stretches of time. Once a young wandering albatross becomes airborne, it is not going to land again unless it is prepared to breed, which can take as long as ten years.

These birds have an average lifespan of 20 to 40 years.

Black-footed Albatrosses have been classified under the “Endangered” category by the IUCN.

Here are some images showing the black-footed albatrosses in their playful activities. 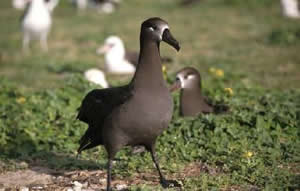 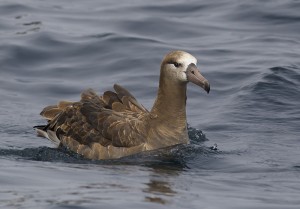