The Laysan Albatross is a species of gull-like albatross most commonly found in the Hawaiian Islands. In 1893, British zoologist Lionel Walter Rothschild first described the Laysan Albatross as “Diomedea immutabilis” based on one specimen that he found on Laysan Island.

Length of the body: The Laysan Albatross is a large bird, with having an average length of around 32 inches.

Wingspan: Their wingspan stretches for more than six feet.

Body color: The head, the lower area of the body and the lower rump are white in color. The upper wing, upper rump, back, mantle and tail have blackish-grey coloration. These birds have a black splotch around the eye. There are dark markings under the wing; this area of the body varies with individual specimens. 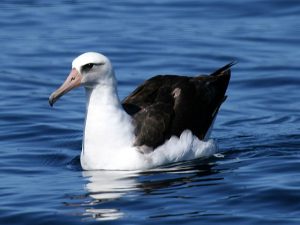 Bill: The bill is pink in color and has a dark tip.

Feet: These birds have webbed feet.

Juveniles: The juveniles have a dark upper rump and a grey bill.

Sexual dimorphism: Both sexes are identical in appearance.

These birds are prone to travel great distances while searching for food. They spend most of their lives out at sea and can fly around the ocean waters for several years at a stretch. While flying, they may not even flap their wings for several hours or even for days. The only time they come to land is when they have to breed. Once a young chick leaves its nest, it will head out to open waters and will return again after three to five years when it wants to find a mate. These albatrosses are around six to seven years of age when they mate for the first time, and stay monogamous for a lifetime. They indulge in elaborate dancing rituals to attract a mate.

The Laysan Albatross likes to feed mostly on cephalopods, crustaceans, fish eggs, fishes and squids. The eggs of the malolo (flying fish) are said to be one of the most favorite foods of these albatrosses.

These birds are surface feeders. It likes to scoop its prey from under the surface of the water. They mostly feed at night.

The call of the Laysan Albatross resembles loud whistles having multiple tunes. Sometimes the whistles are accompanied by a lingering quack.

The Laysan Albatross travels through great distances in the sky in soaring movements. They may fly high up in the sky or suddenly plunge downwards in graceful movements. They change their direction of flight by tilting their head in the intended direction or by twisting their tail. They are often in the habit of not flapping their wings, sometimes even for days. 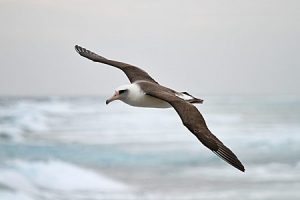 These birds are commonly found in the North Pacific islands. The sites where they are mostly predominant are the Hawaiian Islands, especially the islands of Laysan and Midway. These birds have also colonized Guadalupe Island which is located off the west coast of Mexico. They are also prevalent in French Frigate Shoals, Aleutian Islands and Revillagigedo Archipelago as well as in the Bonin Islands. When these birds are away from their breeding zones, they are mostly found in the area stretching between Japan and Bering Sea as well as south to 15°N.

These birds do not have any migratory season as such but they tend to spend most of their breeding time in and around Baja California as well as on the northwestern Hawaiian Archipelago. During the non-breeding months they are mostly flying around the Bering Sea and the North Pacific Ocean. 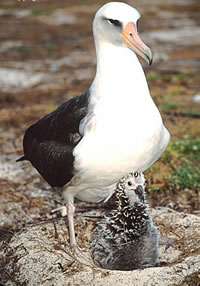 The Laysan Albatross mostly reside in open waters; while breeding, they stay mostly on islands.

The Laysan Albatrosses have adapted themselves well enough to cope with the harsh winds of the North Pacific Ocean. These birds are capable of sleeping while flying. This saves them the need to look for a shelter on land to rest at night as well as save them from the attacks of predatory species.

The mating season for these birds lasts from November to July.

The Laysan Albatross is colonial by nature. They mostly like to nest on atolls and small scattered islands. Large groups of these birds often nest together in the same area. The structure of their nests depends on the surroundings the nests are built in. Sometimes a nest can just be a small scoop dug in the sand; it can also be a nest covered with vegetation.

These birds have a protracted breeding cycle. This means that they generally breed annually but in some cases certain individual specimens might skip a year or two in the middle.

The young birds will return to their home colony three to five years after fledging. However, they will not breed before they are at least seven to eight years old. During the time span between these two periods, they try to find a mate and share a bond with them. These birds are monogamous and will mate for life.

The courtship of Laysan Albatross involves elaborate dances that are comprised of nearly 25 stylized movements. The mating dance generally starts with bill clapping between the male and the female. Another important ‘dance’ movement involves ‘skypointing’ where they both raise their heads and stare up at the sky. Sometimes multiple pairs of Laysan Albatross dance in close proximity. 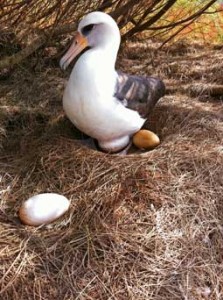 These birds are sometimes known to form homosexual pairings. A couple involving two female birds had been found in the breeding colony of the Hawaiian island Oahu; the male to female sex ratio in this island is 2 to 3. In some cases, unpaired females are known to form pairs and breed successfully. The eggs are taken care of by the paired males.

Generally these birds will lay one egg at one time. If the egg is destroyed or for some reason turns out to be infertile, the female will not lay any more new eggs for that particular year.

The egg is white and covered with spots. Incubation is carried by both the parents; the female will incubate the egg for the first few days and then the male will do the same for the next 2 or 3 weeks. Incubation lasts for about 65 days. This is followed by brooding for several weeks. After this both the male and the female bird will move out to the sea to look for food for the growing chick. It takes around 160 days for the chick to fledge. This extended time invested by both the parents in rearing the young provide a hint as to why the courtship ritual is long; both the male and the female birds want to make sure that the other one is intended to stick together.

Normally both the parents take part in feeding a chick. The adult birds feed the young regurgitated food. When the chick is few weeks old, both the parents leave it in the nest and goes off to search for food. During this time the young chick has to look after itself and stay nearby so that its parents can easily find it when they return.

Hybridization between the Black-footed Albatross and the Laysan Albatross has been known to occur in some cases.

The average life span of these birds is 40 to 60 years.

The Laysan Albatross has been classified under the list of “Near Threatened” species by the IUCN. Widespread slaughter of these birds by humans prior to 1900 and attack by predatory species have greatly reduced their overall numbers. They are also known to often ingest plastic materials like toothbrushes and bottle caps. This results in the death of several young Laysan Albatross chicks every year. Longline fishing is another threat to these birds.

Here are some images showing these birds flying gracefully in the air as well as their activities while socializing on land. 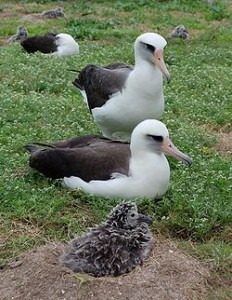 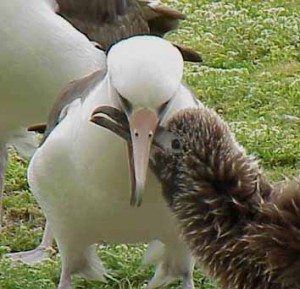 The Laysan Albatross is one of the most beautiful birds found in these parts of the world. Watching them soar across the sky certainly makes a spectacle of breathtaking beauty.