The Short-tailed Albatross, also known as the Steller’s Albatross, is a seabird species native to the North Pacific Ocean. This bird is related to other North Pacific Albatross species, but its behaviors and morphology resembles those of the Southern Ocean Albatrosses. Peter Simon Pallas, the German naturalist, described the Short-tailed Albatross from the skins collected by fellow German naturalist Georg Wilhelm Steller. The species had become near extinct due to the feather trade. But, their populations are reviving gradually with proper protection.

These medium sized Albatrosses have an attractive appearance:

Plumage: The plumage of the adult Short-tailed Albatrosses is white. They have black flight feathers, a number of coverts and black terminal bars on their tails. Juvenile birds are brown in color. Their feathers whiten as they grow up.

Bill: They have large pink bills. The bills of the older birds have a blue tip. 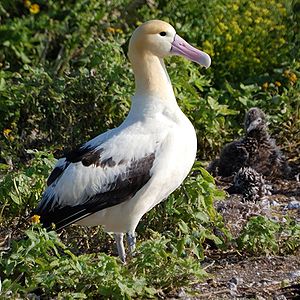 Head: Their crowns and napes are yellowish in color.

Body: The chests and underbellies of these birds are white.

Feet: They have a pair of yellow feet.

This seabird species was once widely distributed in the North Pacific Ocean near Japan and Taiwan. At present, this species nests on Torishima and Minami-kojima in Senkaku Islands, Japan. They are also found along the coasts of eastern Russia, China, South Korea, Alaska and the northwestern parts of the Hawaiian Islands as well as the western coasts of the United States.

This pelagic species mainly inhabits open oceans. They build their nests in bare grounds of islands. The locations of their nests are surrounded by medium sized to high cliffs.

The diet of these carnivorous seabirds mainly consists of Squids. But they may also eat crustaceans, shrimps and floating fish eggs. Like other seabirds, they also pick up offal from fishing boats. 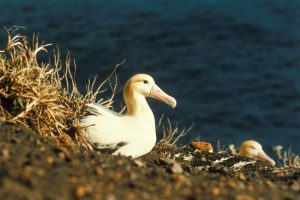 Find out about their behavior patterns:

Large carnivorous fishes such as Whales and Tiger sharks are known to prey on them.

Their adaptive features help them to survive in their natural habitat.

The Albatrosses of this species are powerful fliers. Their long narrow wings help them to fly long distances, using the wind’s energy. They can glide on air currents and stay aloft without flapping their wings for long periods of time. 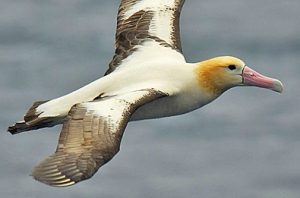 The Albatrosses of this species arrive at their colonial nesting sites during mid October.

They become reproductively mature at 4 years of age. But these seabirds do not breed before they become 7 to 8 years old. The Short-tailed Albatross build their nests using grass and leaves. The females lay one egg during each breeding season. Both the males and the females incubate the eggs in alternate shifts. The adult birds of a pair find food for each other during the incubation period which lasts for around 65 days.

The Short-tailed Albatross chicks hatch between the months of January and February. The young birds are fed and taken care of by both parents. They start flying (fledge) 4 to 5 months after they hatch, during May-June. The young birds no longer live with their parents once they learn to fly.

These birds have a very long lifespan. They generally live for 20 to 45 years in the wild.

Adult birds migrate to the nesting sites every year during the breeding season. They remain in the islands until their chicks are properly fledged. Then they return to the oceans and remain there until the next breeding season. But young birds do not migrate to lands before they become 5 to 6 years old.

Short-tailed Albatross is listed in the “Vulnerable” category by the IUCN. They were hunted in large numbers for their feathers in a recent past. This almost made the species extinct. At present, this species is protected by various laws in all the countries they are found. Various wildlife conservation organizations are taking necessary measures to recover the Short-tailed Albatross populations.

Here are some interesting facts about these Albatrosses:

Here are some images of this seabird. 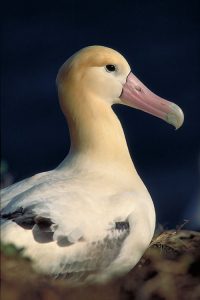 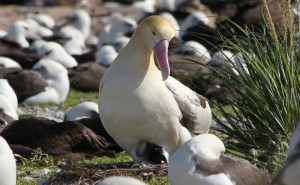