Acanthurus lineatus, which is popularly known as Striped Surgeonfish can easily be recognized for its color. Acanthus lineatus is one of the most aggressive and beautiful of all surgeonfishes.

This fish is called by other names such as: 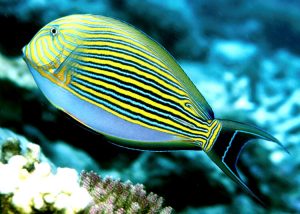 An adult fish can be about 38 – 40 cm in length. Like most tang fishes, its body is compressed from both sides. The upper half of the body has black-edged yellow and blue stripes. The underside of its body may vary from pale blue to purple. Males are generally larger than females. Their caudal spine is venomous and may cause serious wounds.

This fish is mainly found throughout the central part of Indo-Pacific region. In Australia, It is found from Queensland, northern Great Barrier Reef and Western Australia to the north of New South Wales. They are also found in coastal areas of Japan and the Hawaiian Islands.

They mainly inhabit tropical and sub-tropical open coral reefs where the temperature is about 22 – 28 degree Celsius and water current is strong. Schools of adult Acanthurus lineatus fishes can be spotted in shallow gutters.

Apart from its breeding season, Acanthurus lineatus is territorial. Their territory is said to be visually determined. Their intraspecific behavior includes swimming, circling and provoking or chasing other fishes. Body color, including the caudal fin color pattern, changes with excitement; central area commonly turnig black to white. In a school, there are generally one territorial male with several females. 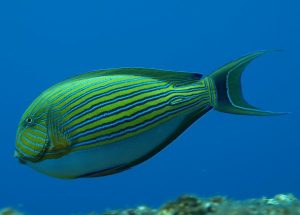 These fishes breed throughout the year. However, peak season for breeding is from October to February.  This fish grows at a fast pace, reaching 70-80% of their total growth in the first year itself.

Acanthurus lineatus is generally herbivorous. In its natural habitat, it feeds on marine algae and occasionally on meaty bits available in its surroundings. It generally feeds on sea-weeds and veg-based sources of foods.

There is no specific information available about the life span of this fish, but it is not known to live beyond 18 years.

Unlike other aquarium fishes, this fish is somewhat difficult to keep as a pet. These are known to be aggressive and quarrelsome. They have a reputation to fight with other fish species at times. This is the reason why only a single acanthurus lineatus fish is kept in one aquarium. This species can adjust itself quite well in captive conditions.

Here are some interesting facts about this fish:

This species is not listed in the list of International Union for Conservation of Nature (IUCN).

Here are some pictures of this beautiful looking fish: 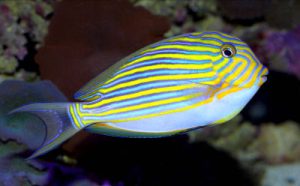 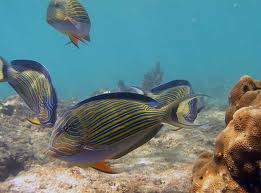