Yellow tang is a marvelous looking salt water fish. It belongs to the Acanthuridae fish family. This is one of the threatened marine creatures. Though this is for its beauty, still this fish also directly helps balancing the marine life apart from the conserving the ecological system indirectly. Find out every minute detail of this glamorous aquatic creature in the article below.

Color : As the name suggests this fish is yellow in color. Their bright yellow shade fades a little at night and brown patches develop on the middle parts of their bodies. A white horizontal band becomes visible on them during this time.

Shape : An adult yellow tang fish is oval in shape. 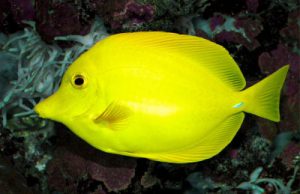 It is very interesting to observe behavioral traits of this gorgeous looking fish.

Yellow tang mainly diets on marine plants like benthic turf algae and so on. These fishes eat up the algae from shells of tortoises, working as a cleaner for them.

In aquariums, where they are bred in captivity, they are fed artificial based aquarium foods. These foods affect their health in a bad way in the long run.

These fishes are vastly found in Indian Ocean, Pacific Ocean, eastern zones of Japan and western parts of Hawaii.

These fishes tend to inhabit in the shallow reefs of water bodies. Their habitat depth vastly varies from 2 meter to 46 meter beneath the surface water level.

Most of the marine animals that wander about in the depth range of yellow tang’s habitat are supposed to be its predators. Interestingly, orange tang is its most common predator.

Yellow tangs are small fishes. They do not even have much of adaptive features. These fishes possess white spikes on both sides of its tail fin. Under normal conditions theses spikes stay evenly flattened against their tail fins. They outstretch these spikes and extend them to attack their predators when they feel threatened. The same spikes are also used by them in territorial fights with other species. 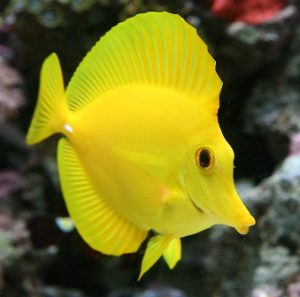 Nothing definite is known about mating season of the yellow tang. Their mating season varies according to lunar calendar. They either mate in the new moon period or in the full moon period.

During courtship the male fishes change colors and roam in a shimmering movement showing the females their interests in spawning. Then both the males and females swim in an upwards arc shaped course together. During this movement both the genders release their germ cells in the water.

Newly hatched larvae feed on the egg yolk till third day after hatching. From the fourth day they start feeding on tiny planktons. Gradually the larvae start developing fins, spikes on their tail fins, thorn like extensions on ventral and dorsal fins. In their next stage of growth, known as the “accronurus larva”, their bodies are transparent and still remain scale-less. In this stage they emit a silver radiation from near their abdomen.

Gradually they acquire their original oval shape in the process of growing. During this tie their spines develop on their caudal peduncle. The thorns on their fins also start disappearing slowly.

They mature into their full grown stage by tenth week. These fishes are very aggressive and territorial during their growing stages. Once they reach adulthood they sober down a lot, apart from their territorial nature.

This species of fish has been observed to live up to 7 years in the wild. In rare cases they live lesser than that.

Yellow tang do not have any sub-species. However, they have many sibling species.

Feeding : These fishes are herbivorous beings. Feed them dried sea weeds or live rock or algae. They can also be fed fresh and live aquatic herbs. 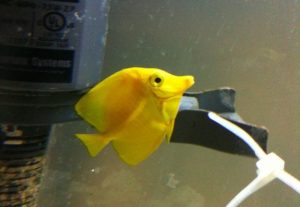 Caring : Their tank water need to be changed regularly. It is useless trying to make the yellow tang mate in captivity, because they will never mate in tank.

According to IUCN reports this marvelously cute species of fish is under existence threat. The organization has enlisted the species in their red list.

These fishes are small and they do not even have much adaptive features to cop up with the environment or fight their predators. Moreover, they are widely marketed all around the world as aquarium fishes. They cannot survive well in captivity. They do not even spawn and breed in captivity. Thus their population is decreasing alarmingly gradually.

Read some of the most interesting things about this amazing fish aggregated below.

check out the pictures of this extremely interesting fish below. 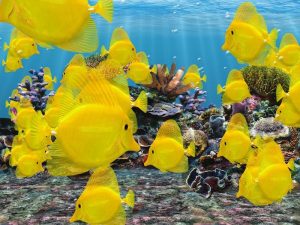 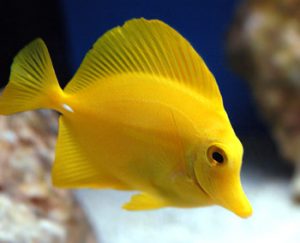