The Naso tang or the Orangespine unicornfish is a variety of tang fish found mostly in the Pacific Ocean and the Indian Ocean. It is also known by several other names, such as the Clown tang, Masked Unicornfish and Striped-faced Unicornfish.

There are no protruding horns present in the Naso tang, which is quite unlike other unicornfish species. Their body is of grayish brown color. A yellow line runs from the eye and the snout up to the back of their mouth. The front portion of this line is black. The area above the eye has a pale yellow patch. The lips are orange in color. 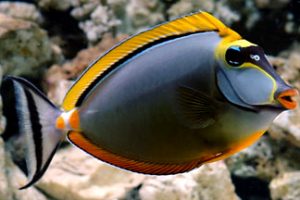 The dorsal fin is covered with black horizontal stripes on the front portion of the fin as well as along the bottom; the upper portion of the rest of the fin is covered with white stripes. Along the base, there is a blue stripe and another blue-colored stripe on the outer edge. The tail has a lyre-like structure. There is a yellow band along the end of the caudal fin. The caudal fin in males will develop into nice, elongated filaments or streamers from both the corners.

Naso tangs can change their color and appearance pretty quickly and adapt to any changing mood or environment. They can turn their body color to a dark shade with gray patches when they need to hide themselves in the reef.

Average length of these fishes lies around 45-46 centimeters.

The Naso Tangs have a very peaceful and friendly nature. They like their aquatic environment filled with reefs and corals. They are quite physically active. Mostly they like to swim around and graze on the algae. Due to their amicable nature, they bond well with other species. However, these fishes are one of the most aggressive ones of the Naso genus. They can display territorial behavior sometimes with other species and at other times with their own kind. They often tend to attack other tangs and surgeonfishes, especially the ones of their own kind.

Naso tangs mostly like to feed on brown algae, such as Dictyota and Sargassum. They also feed on seaweed and some fleshy fodder, such as Enchytraeidae, grindal worms, mosquito larvae, tubifex, frozen mysis and brine shrimp. In some rare cases, they will also eat large-polyped corals.

The Naso Tang is found mostly in the Indian Ocean and the Pacific Ocean. These fishes can also be seen in places such as Honshu in Japan, Australia’s Great Barrier Reef, New Caledonia, the Red Sea and the coast of Africa. In the east, these fishes are commonly found in Hawaii, Pitcairn Islands and French Polynesia. In the regions of eastern Pacific, they are found in the waters of the Clipperton Island.

Naso Tangs are mostly seen in lagoons and seaward reefs. These fishes are found at water depths between 5 meters and 90 meters. They mostly prefer to swim in areas where the water has high oxygen content and the water currents are strong.

These fishes are commonly hunted by certain predatory species such as manta rays, groupers, reef sharks, lionfish and moray eels.

The Naso tangs have adapted themselves quite well in their watery habitat. Their sharp scalpels and spiny fins enable them to protect themselves from predators. They also have the ability to change their color into darker shades while hiding behind rocky formations which helps them to remain unnoticed.

There is very little known about the breeding habits of the Naso tangs in open waters. Naso tangs are a gonochoristic species. There are very little differences between the sexes. 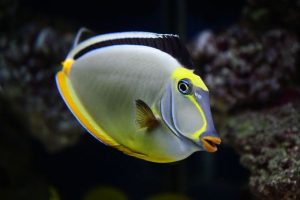 Male Naso tangs are polygamous; they usually mate with a number of females in a single season. The females breed only once per month. The courting ritual involves the males searching for the females and then trying to entice the females by changing colors and indulging in a shimmering movement. Pair spawning has been observed in the ocean. A pair of Naso tangs swims to the water surface and release their gametes.

The average life span for this species in the wild is around 10-15 years.

Due to their colorful appearance and friendly demeanor, the Naso tangs are often kept as pets. Here are some valuable information about how to pet these beautiful fishes.

Aquarium: The Naso Tangs are active swimmers and so it is impotant for them to reside in a big tank. Juveniles can do well in a tank having a water capacity of 60 gallons. An adult tang should be kept in a tank with a minimum water holding capacity for 125 gallons. Often small space within an aquarium is a major factor behind their stunted growth and behavioral problems. The aquarium should have enough free space for the Naso tangs to swim around. The aquarium should also be provided with several hiding spots where the fish can hide easily. Acroporid coral skeletons, rocks and corals provide good hiding spots for these fishes.

It is always better to house a single Naso tang fish along with other fishes in an aquarium. Naso tangs are friendly but tend to attack their own kind. Even if you are planning to house a Naso tang with some other tangs or surgeonfish variety, make sure that they are very different in coloration and physical appearance. While introducing a Naso tang to an aquatic environment, make sure that the tank is comprised of a healthy amount of algae plantation.

Water Characteristics: Aquatic environments for Naso tangs should have strong water movements as they like to have the water brush through their gills. The water should also have high levels of oxygen.

Temperature: The water temperature should be kept between 24°C and 26°C.

Acid-Base Level: The acid-base level of the water should range between 8.1 and 8.4.

Specific Gravity: The specific gravity of water should be kept between 1.020 and 1.025.

Food: The principal food for Naso tangs are the algae. It is thus important that their aquarium is provided with ample amount of algae like Dictyota and Sargassum. Fishes kept in aquariums should also be fed frozen formulas comprised of algae or spirulina, flakes, zucchini, spinach, broccoli, leaf lettuce, seaweeds like the Japanese Nori, tubifex, grindal worms, mosquito larvae, Enchytaeidae as well as invertebrates like mysid shrimps and brine shrimps. Naso tangs should also be fed Vitamin C supplements which can help in preventing or reducing Lateral Line Erosion. Naso tangs should be fed thrice daily in small quantities.

It is important that frequent or prolonged usage of copper medication is avoided as this can destroy necessary microfauna present in the Naso tang’s digestive system.

Diseases: Naso tangs do not produce much skin mucus, Hence they are vulnerable to skin problems like marine ich. These fishes are quite strong and sturdy and when they are in the wild, they visit cleaner wrasses to get rid of marine ich. However, wrasses are difficult to maintain in aquarium habitats. Hence the fish infected with marine ich should be kept in quarantine for a few weeks and then reintroduced into the main aquarium. They can also be fed neon gobies during this time.

Fish Poison: The scalpels of these fishes can cause serious wounds that may lead to several hours of pain as well as discoloration and swelling. Hence they should be handled with a lot of care.

Here are some interesting facts about the Naso tangs:

Here are some pictures showing the Naso tang fishes in all their beautiful coloration. 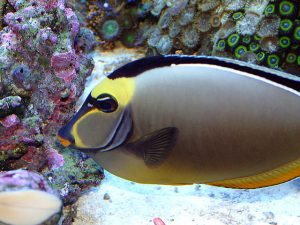 The Naso tang fishes are one of the most beautiful of all the surgeonfishes noticeable for their bright orange lips and distinct colors. Their friendly and energetic nature has brought them popularity as aquarium pets.