Kole Tang is a species of marine reef tangs belonging to the Acanthuridae family. Other names of this species include Yellow Eye Kole Tang, Yellow-Eye Tang, Goldeneye Tang and Spotted Surgeonfish. These brightly colored fishes are very popular for aquariums.

The fish of this species are very beautiful with their wonderful colorations.

Color: These light brown fish have yellow and blue horizontal stripes all over their body. Their face is covered with blue-yellow spots with a purplish chin. Juvenile fish are yellow or greenish yellow with blue markings.

Size: They can grow anywhere between 5 inches and 7 inches in size.

Eye: Their small eyes are surrounded by a vivid yellow area, earning them the name Yellow Eye Kole Tang. 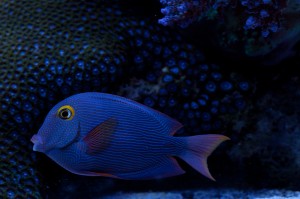 These marine reef fish inhabits in depths ranging from 3 feet to 330 feet; however, they are mostly found in depths up to 40 feet. They also live in outer reefs and shallow lagoons where powerful tides keep the water well oxygenated. Adult fish of this species are solitary while juveniles form small groups.

They are generally considered as herbivorous feeding on unicellular (consisting one cell) algae. In the wild, they also eat organic material like detritus.

This beautiful tang species has an interesting behavior pattern.

They have some adaptations that help them to survive in their aquatic habitat. The sharp scalpel situated at the end of their tailfin helps them to escape predation. These tangs also have small, sharp and flexible comb-like teeth that are adapted to help them graze varieties of detrital material as well as algae off of surfaces like rocks and sand.

Not much is known about the reproduction of these fish in the wild except that they reproduce through the process of spawning. Although they have occasionally been reported of spawning in aquariums, captive breeding of this species has not been done yet. It is very difficult to differentiate male and female Kole Tangs because of the similarity in their appearances but the male fish may demonstrate color change during mating season. 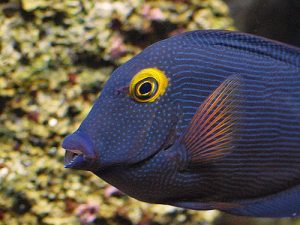 These tangs are fairly easy to take care of while they can be a great addition to reef aquariums.

Housing: They need plenty of space to swim and hide in the aquarium so a 70 to 90 gallon tank should be ideal for keeping them.

Feeding: One should feed these herbivorous fish with lots of vegetables. They are known to graze and eat all day so they should be kept in a tank with sufficient algae growth. However, they can cause severe damage to any valuable delicate water plants and algae in the tank. Kole Tangs should occasionally be fed with meaty foods like shrimps and worms while they also accept frozen foods and tank fed foods.

Temperature: The temperature of the tank should be kept between 75 °F and 84 °F.

Water Treatment: Well filtered water should be used along with appropriate protein skimmer to keep the tank clear of organic compounds.

Water Specific Gravity: The specific gravity of the water should ideally be somewhere between 1.019 and 1.026.

Temperament: These tangs are quite friendly in nature and live peacefully with other species of fishes. However, Kole Tangs tend to fight between themselves if kept in the same tank. They are also somewhat aggressive to other fishes with a similar shape like themselves.

Handling: One should watch out for the sharp tang or scalpel near the tail of these fish while handling them, even with nets.

Diseases: They are prone to some diseases like Ick and black spots. Deficiency in nutrition levels may increase the risk of lateral line disease.

These tangs are not included in the IUCN “Red List” of threatened species.

Here are some images of this beautiful species. 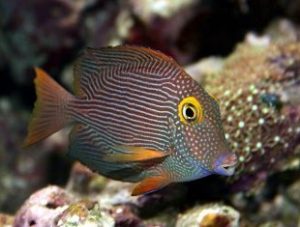 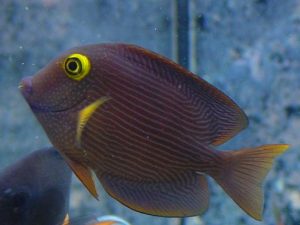 Kole Tangs are among the most popular species of surgeonfishes or tangs. These beautiful fishes can be a great addition to any reef aquarium. They can have a long life expectancy in captivity when taken care of properly.