The Sailfin Tang is one of the most beautiful marine reef tang fishes extensively found in the waters of South Pacific and Indian Ocean. It is one of the largest fish species belonging to the genus Zebrasoma. These fishes are quite popular as pets. 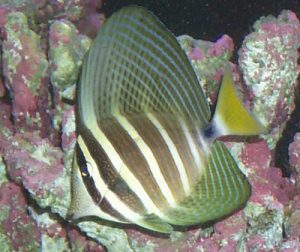 The young ones are similar in appearance to the adults but have more yellowish coloring.

The fish can attain a maximum length of 15.8 inches (40 centimeters).

Sailfin tangs are quite active swimmers. They like their aquatic environment filled with corals and reefs. Unlike some other surgeonfishes and tangs, the Sailfin tangs are very peaceful. They almost never behave in an unpredictable manner. However, they might occasionally display some aggression towards other tangs, especially members of their own species. They are normally compatible with most other fishes.

These fishes always like to be on the move. Most of their time they like to graze on algae. They will often search for algae even on the nooks and corners of rocks. Sailfin tangs can display territorial behavior sometimes with their own kind and sometimes with other fishes.

Under alarming or stressful conditions, the Sailfin Tang tends to expand their fins and develop a larger appearance. If that does not work, they will hide themselves somewhere and change their color as an indication of their stress.

The Sailfin Tang is mostly found on the waters of South Pacific, the Indian Ocean and Oceania. In the Pacific, these fishes are found in places like Indonesia, northern and southern Japan, the Hawaiian Islands, the Tuamoto islands, Rapa Island, southern regions of the Great Barrier Reef and New Caledonia.

These fishes are commonly found in seaward reefs and lagoons. They can live in waters to a depth of 3 to 200 feet or more. The young ones are solitary by nature and like to spend their time mostly hidden behind rocks, corals and turbid reefs. They prefer coral areas having strong water currents.

Some of the well-known predators of Sailfin Tang include moray eels, groupers, lionfish, reef sharks and manta rays.

These fishes have adequately adapted themselves to their aquatic environment and have developed certain defense mechanisms to protect themselves against predatory fishes. These adaptations include spiny fins and razor-sharp scalpels. They are also able to produce poisonous secretions that can paralyze their predators.

Not much is known about the breeding habits of these fishes in the open waters. Sailfin Tangs are gonochoristic by nature; which means that the fishes are either male or female and no hermaphroditic characteristics are present. There is little sexual dimorphism between the sexes; the males are just a little bigger in size than the females. Other sexual differences appear only during the spawning period. 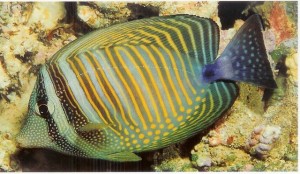 Spawning of these fishes is closely related to the lunar cycles. The fishes breed in pairs. The males perform a color changing spectacle to draw the attention of the females. The males are polygamous and can mate with several females within a single season. On the other hand, the sexually mature females breed only once in a month.

The pelagic larvae initially survive on the egg yolk for the first three days. From the day four, they start to feed on planktons. As they move on to a more developed stage, their bodies become more compressed and thorns appear on their dorsal as well as their ventral fins. Their bodies develop into being scaleless and transparent. This stage of larvae is called “acronurus larva” which is seen only in the species of the “Acanthuridae” family. As they mature, their bodies become oval and round-like and the caudal peduncle becomes more prominent.

These fishes live for about 5 to 7 years in the wild. In captive care, they may live longer than that.

Sailfin Tang fishes are a popular choice with marine pet enthusiasts. Here are some important guidelines for providing a healthy pet environment for these beautiful fishes.

Aquarium: Sailfin Tangs like to swim around all the time. It is thus important to provide them with a big tank. For juveniles, a tank with the capacity for holding 75 gallons of water is sufficient. However for an adult specimen, the tank should have a water holding capacity of 100 gallons. The aquarium should not just have enough open space for the fish to swim around but it must also be provided with several nooks and crannies for the fish to hide if it may want to. Acroporid coral skeletons are a good way to create such hiding spots.

Individual Sailfin Tangs should be provided with their own space. It is better not to keep two or more of these fishes together unless you can provide them with a large sized aquarium that is adequately decorated.

Water Characteristics: The water in the aquarium should have high levels of oxygen and strong water movements.

Temperature: The temperature of the water should range between 23°C and 28°C.

Acid-Base Level: The pH level of the water should be kept between 8.1 and 8.4.

Food: These fishes mostly survive on algae in the wild. Hence their aquarium should be provided with adequate amount of filamentous algae. Other than that, fishes in captivity should also be fed boiled carrots, leafy vegetables, dried seaweed and some invertebrates like brine shrimps and mysid shrimps. They should also be provided Vitamin C supplements which can help them to reduce or prevent Lateral Line Erosion. The food should be served thrice a day in small quantities instead of serving once in large quantities.

Diseases: Care should be taken to protect them from diseases such as marine ich. The infected fish should be quarantined for a week or two before being reintroduced into the main tank.

Fish Poison: These fishes should be handled with care as they have poisonous thorns on their body. Any wounds from them can be infectious and damaging.

Here are some interesting facts about these species:

Here are some images of these beautiful fishes. 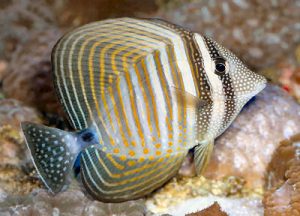 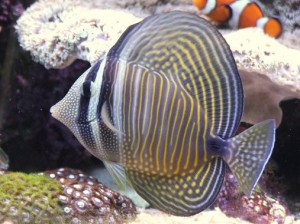 The Sailfin Tangs are one of the most beautiful of all the Surgeonfish varieties. They are also very popular as pets and taking care of them is relatively easier than some of the other tang fishes.