Great Crested newts are usually bright-colored semi aquatic amphibians. They are the largest of the three Newt species indigenous to Britain. They are the most threatened newts in Britain. These amphibians are also known as Northern Crested Newt or Warty Newt.

The Great Crested Newt is comparatively larger and heavier than other newts.

Throat: Throat of this creature is heavily mottled with dark pigments.

Toes: Their toes are strikingly marked, with black and orange stripes. It is brighter in males than females.

Color: Their color ranges between dark brown and black. Their underside is bright orange with black spots. The sides are dappled with small white dots.

Texture: Their skin is warty and rough. Their skin texture is granular. 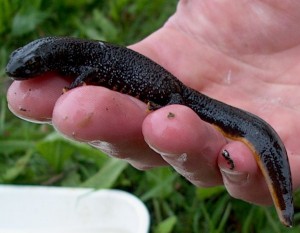 Tail: They have a tiny filament at the end of the tail. There is a yellow-orange stripe on the lower edge of the females’ tails. Their tail is short with well developed fins without any sharp pointed tip.

The Great Crested Newt is widely distributed throughout Britain, Scotland and Wales. Britain is home to the largest known populations of the Great Crested Newts in the world. They are pre-dominantly found in Northern Europe, from France in the west to the Urals in the east.

The Great Crested Newt is found in lowland habitats. It is found in large sized ponds, typically on farmlands. They need plenty of ground covered area to search food, shelter and hibernation. This usually takes the form of undisturbed rough grassland, scrub or woodland.

Great Crested Newts are carnivorous. They eat mollusks, leeches and other invertebrates. They at times feed on larvae of other species. Algae, protozoa, small worms and arthropods are also eaten by these Newts.

These amphibians have some interesting behavior patterns. 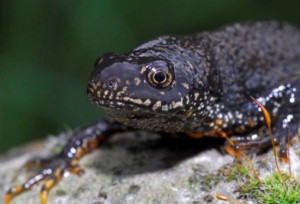 Great Crested Newts are preyed upon by Grass Snakes, Moorhens and Mallards. They are also eaten by Kingfishers and Herons. Their larvae are eaten by fishes.

The Great Crested Newts have certain adaptations which aids in their survival.

Males gather in open water to profess their love and attract females. They tend to be quite possessive and also protect their mates from other males.

The Great Crested Newts develops sexual maturity after they reach their second or third mating season. After performing the courtship display, the males drop a small packet of germ cells in the path of the female. The male then moves sideways in front of her to gently encourage her in a position where the germ cells will be pressed against and picked up by her reproductive organs.

The female lays two or three eggs a day between March and July. Till the end of July there are approximately 200 to 300 eggs. The eggs are laid on submerged aquatic plants, each carefully wrapped in a leaf.

Great Crested Newts utilizes wide variety of water bodies for breeding. They breed in large, deep and clear semi permanent ponds with fair amount of vegetation and exposure to sunlight.

The eggs develop within 1.5 to 3 weeks. When the baby newts are hatched it looks like a tiny adult and has gills and fins on its tail. At times these newts, frogs and toads share the same hibernation place. These newts hibernate in the winter in fissures deep under the soil or under stone walls and houses where they will not get frozen. Grown up newts leave the pond and take shelter under logs or stones during the day, so that they do not tend to dry up. 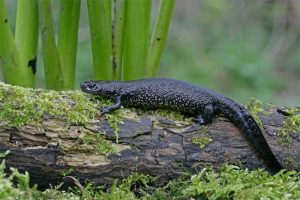 They need plenty of ground cover for hibernation. From the month of October till March, these large sized newts lie dormant under logs and stones. They hibernate in the mud at the bottom of the pond where they breed.

These newts are included in the “Least Concern” category by the IUCN. But they are threatened in Britain and so legal actions have been taken to save them from extinction. They are protected by the British and European Jurisdiction.

Sum up some of the most interesting facts about these amazing amphibians.

Here are some of the amazing pictures of the Great Crested Newts. Take a close look at them. 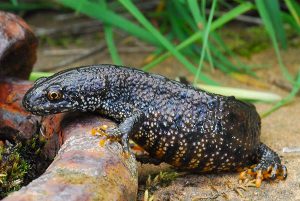 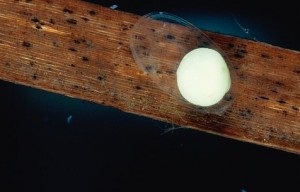