Spotted Turtle is the only remaining Turtle species in the Clemmys genus. This semi-aquatic Turtle is found in different parts of the United States. It is quite peaceful in nature and makes a good pet.

These small Turtles derive their name from their spotted appearance.

Size: Carapace length of the adults ranges between 3.1 inches to 4.7 inches (8 cm to 12 cm). The females are a little larger than the males.

Color: Their carapace is black in color and is spotted with bright yellow marks. The females generally have more spots than the males. The base skin color of this species ranges from grey to black with the head, neck and limps having yellow spots. The underbellies of Spotted Turtles can be yellow, orange, pink or reddish in color.

Carapace: They have smooth upper shells or carapaces. The upper shells are not marked with a central ridge or “keel”. There is one yellow spot on each section of the hatchling’s carapace. 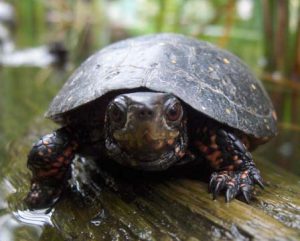 Plastron: Their plastron or bottom shells are yellow to orange-yellow in color with a black spot on each scute. But as the Turtles become older, the whole plastron becomes black due to the increase in its melanism. The plastrons of the male Turtles are concave while the females have flat or convex plastrons.

Head: The black heads have an orange mark on each side. These Turtles also have several yellow stripes on their heads. They have toothed upper jaws. The male Turtles of this species have tan chin and brown eyes, while the females have yellow chin and orange eyes.

Tail: Their short, flattish tails are black with yellow spots and stripes. The males have longer tails than the females.

This Turtle species is found throughout US and in some areas of Canada. Their distribution range extends from Maine and southern Ontario to Florida. They can be found in many US states including New York, Pennsylvania, Georgia, Indiana, Ohio, Michigan, Illinois, Delaware, Virginia and New Jersey.

The Spotted Turtles are semi-aquatic in nature, which means they live both on terrestrial land and water. This species lives in several types of habitats including bogs, swamps, fens, woodland streams, wet pastures and marshes. They sometimes also inhabit brackish streams influenced by tides. These reptiles always live in areas with slow moving water and soft soil. 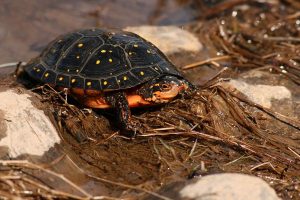 Many animals and birds prey on these small Turtles. Their predators include Raccoons, Muskrats, Skunks, Otters, Minks, Black bears and Bald eagles.

Spotted Turtle has many adaptive features and characteristics that help it to survive in its wild habitat:

Mating takes place between March and May for this species. They are known to mate in their water habitats.

These Turtles become reproductively mature when they are 7 to 10 years old. The females leave the mating ponds to look for nesting spots. They often travel long distances to find a suitable nesting site. Open lands such as fields, meadows and the edges of roads are preferred for nesting. The females dig 2.5 × 2 inches holes with their legs and lay 3 to 6 eggs. The oval eggs have thin and flexible shells. The female Turtles cover the holes with mud after laying the eggs and smooth the dirt over the holes with their bodies. 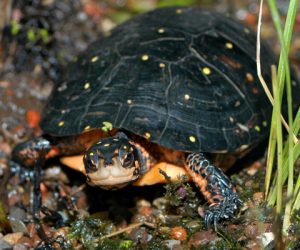 They hibernate when the weather is extremely hot or cold. Hibernation takes place in shallow waters, burrows and lodges. This species have been found to hibernate in groups of 5 to 12 individuals. They come out of their hibernation at the beginning of spring.

The lifespan of this species ranges between 25 to 50 years.

This Turtle make quite good pet for its peaceful nature and lows maintenance level. But it is an endangered species, so one should check with all the local and federal laws before getting a Turtle of this species as pet. Here is some information about housing and caring for a spotted Turtles:

Housing: A 25 gallon to 35 gallon tank is ideal for a pair of Turtles. Half of the tank should contain water and the rest of it should be land. The water level should be 3 to 6 inches high. One should also provide them with pieces of wood and rocks that will work as basking spots.

Lighting: Full-spectrum lighting is necessary for their feeding, growth and breeding.

Feeding: One can feed them with insects, small mouse and live or frozen fish. They also eat trout chow and commercial turtle foods. Adults should be fed once every two or three days. It is important to provide them with suitable protein supplements after consulting a expert.

This species in included in the “Endangered” category by the IUCN. In countries like US and Canada, they are considered to be federally endangered. Predation, habitat loss and their increased use in pet trade are among the main threats to their existence.

Here are some interesting facts about this Turtle:

Here are some images of this turtle species. 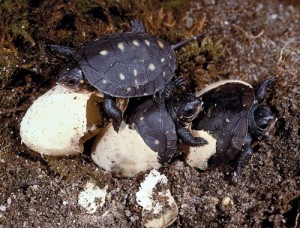 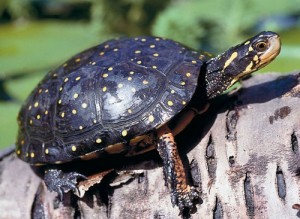 One response to “Spotted Turtle”