Stinkpot turtle is a small and aggressive turtle which falls in the category of musk or mud turtle. They release a foul smell from their musk gland when they are threatened by their predators and hence are named stinkpot turtle.

Stinkpot Turtle are one of the smallest of its species. They grow up to 8 to 14 cm long. The carapace of the Stinkpot turtle is usually dark brown to black. They are smooth and domed when juvenile and flatten as they mature. They have a triangular head with a pointed snout. The Stinkpot turtle have more skin exposed than the usual turtles. They are distinguished by a yellow strip running down from the tip of their snout to the base of their neck. Their carapace is often covered by algae. The adult males have longer and broader tail than the females.

Stinkpot turtle are native to the Eastern side of United and the South Eastern Canada. They range from Maine in the north of Eastern United States to Florida in the South and Texas to Wisconsin. 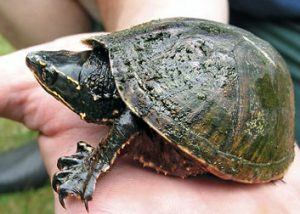 Stinkpot turtles are nocturnal aquatic animal which are rarely seen during the daytime. They spend most of the time inside water in areas of slow moving water or buried in the mud. They dehydrate quickly hence are barely seen basking in the sun. Stinkpot turtle hibernate from October to April. They bury themselves in the mud or sleep in the vegetation inside water. These turtles cannot move or swim quickly. They release a foul musk if they are threatened to protect themselves from their predators. Stinkpot turtles are often aggressive and can even bite if they are restrained.

Stinkpot turtles usually feed on dead preys as they cannot swim or move quickly to hunt living preys. They use their sense of smell to locate their preys.

Female Stinkpot turtles become sexually mature at the age of 9 to 11 years, however, the male becomes sexually mature within 4 years of age. They mate underwater during spring after hibernation. They built their nest near the water under the rotten leaves or shoreline debris. Several females share a similar ground during nesting. They lay up to 2 to 8 eggs during summer or early fall. The eggs are elliptical with a thick shell. They have 65 to 86 days of incubation. The temperature during the incubation determines the sex of the hatchlings. Temperature below 25 degree Celsius produces males and above 28 degree Celsius produces females.

Stinkpot turtle live for up to 30 years of age, however, it has been recorded to live for 50 years in captivity. 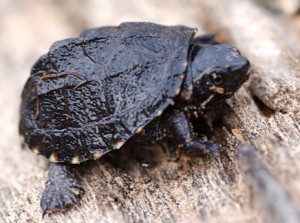 The most common predator of the stinkpot turtles are raccoons. They are often crushed by the cars and fall in the net of the fishermen.

The small size of the Stinkpot turtle makes it one of the most preferred pet. They can be kept in a glass tank with a water level of minimum 10 inch. The water temperature of about 26 degree Celsius is recommended for hatchlings and about 21 to 24 degree Celsius for adults. Basking area with a temperature of about 31 to 33 degree Celsius should be provided. UV light of 2% would be beneficial for the turtle and the plants in the aquarium. However, natural light strengthens the shells.

Stinkpot turtles come from slow moving water hence the current in the aquarium should not be high. Feed the turtles with commercially available frozen worms and insects. The water condition of the aquarium should be checked periodically. De-chlorinating solutions help the aquarium from any harmful chemicals.

See how this incredible reptiles of Stinkpot Turtles looks like in the pictures below: 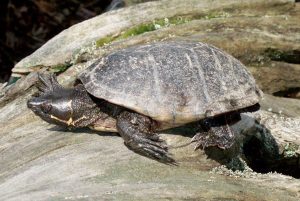 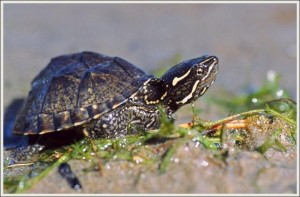 One response to “Stinkpot Turtle”