The Spiny softshell turtle is a species of turtle found in many parts of North America and Mexico. They have derived their name from their flexible, rubbery shell top having spiny projections on the front brim of the carapace. These turtles were first described in the year 1827 by the French naturalist Charles Alexandre Lesueur.

These turtles have a flat, rounded and rubber-like carapace. The soft brim of the carapace is lined with small spines. The lower shell is called plastron. Unlike other turtles, there are no plates or scutes on the lower shell or the carapace of this turtle.

The long tapered nose has ridges and rises upward at the end.

Spiny softshell turtles have claws on their feet. Their webbed feet help them in swimming. 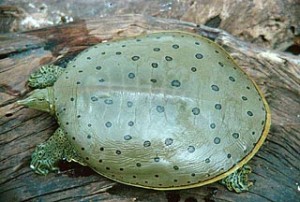 These turtles are generally olive or tan in color. The carapace or the upper shell is covered with black speckles or spots. In most subspecies, the brim of the carapace is circled by a dark lining. Some subspecies have a couple of dark lines near the end of the tail. In some cases white spots may be found. The turtle bones can be seen through the yellow or off-white-colored plastron.

The female turtles are larger in size than the males and can reach up to a length between 30 cm and 48 cm. The length of the females’ carapace ranges between 7 and 18 inches and that of the males range between 5 and 9 inches. Compared to the females, the males have a rougher carapace. Males also have a thicker, longer tail. The females also change in their appearance with age, developing an overall darker complexion and having a grayish mottling over the carapace.

These turtles mostly like to bask on the shore. However, they retreat quickly at the slightest hint of a movement which makes it difficult to spot them. Often, large turtles can be seen basking in the surface level of water. These turtles spend the majority of the lives remaining buried in the sandy or muddy bottom of their watery habitat. This serves as a hiding spot from where they can locate passing insects and fishes and grab them for a nutritious meal. The spiny softshell turtles are able to stay underwater over long periods of time without drowning as they can breathe oxygen directly from water. Turtles living in colder places hibernate underwater and remain inactive from fall to spring.

Spiny softshell turtles are mostly carnivorous and like to eat crayfish, fishes, crickets, worms, shrimp, pink mice, carrion, snails, mollusks, amphibians and aquatic insects. They also like to consume acorns, aquatic plants and leaves. They can actively search for their prey or they can hide themselves in mud, sand or gravel and wait for an unsuspecting victim to swim by.

The spiny softshell turtle is found to inhabit in many parts of the United States. In the north, it resides in the Canadian provinces of Quebec and Ontario. It can also be seen in the Mexican states of Nuevo León, Tamaulipas, Chihuahua, Coahuila, Morelos, Baja California and Honduras.

The Spiny softshell turtles mostly like to hang around in small marshy creeks, lakes, farm ponds and sloughs. They can also be seen in water streams, fast-flowing lakes and rivers. These turtles are extremely agile and can move very quickly both in water and land. They are in fact the fastest moving turtles on land.

Spiny softshell turtles spend most of their time underwater breathing through their skin. This helps them to avoid predators like birds and raccoon that might attack them on land.

The spiny softshell turtles mate from middle of the spring season till early summer.

These turtles reach sexual maturity around the age of 8-10. The females are capable of mating one year and giving birth to young turtles from that particular mating for several subsequent years.

The courtship ritual of these turtles is very elaborate and interesting. While swimming, the male turtle will give a light push to the female’s head and if the female is interested in mating, the male will position himself above the female without grasping the female with his claws. The mating ritual also includes extension of neck, waving of the webbed feet and shaking the head. 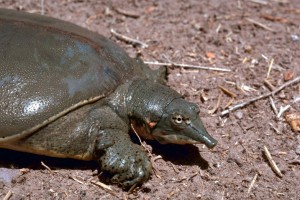 The females lay their eggs along a sandbar or in sandy beaches by digging a small cavity on the ground. Some subspecies would search for a more proper and suitable site for laying their eggs. If they don’t find a suitable place to lay their eggs, they will just drop the eggs in their watery habitat. The eggs will hatch if they can manage to survive for 4 to 5 hours without being eaten by predators.

The females may nest more than once during a breeding season and usually lay eggs anywhere between 9 to 38 calcareous-shelled eggs in a clutch. They may lay two or more clutches of eggs in a year. The eggs take about 55 to 85 days to hatch. The eggs have a diameter of 29 mm and hatch mostly around the months of August and September. The females do not provide any further care after the eggs have been laid.

These turtles have a life span of around 50 years or more.

There are seven different sub-species of this turtle. They are

These turtles tend to grow very fast. So when they are kept as pets, they need to be provided with a large aquarium comprised of a good filter system. They like to dig into the ground and burrow themselves in mud and soil, which makes the water filthy. They also have a peculiar habit of killing fishes just for the heck of it and not eating them, thus making the water polluted. It is thus important to regularly clean the tank and replace the water as they breathe with their skin and can get easily infected by fungal infections and shell rot on their carapace and plastron. Adding a small quantity of salt will help in preventing the growth of bacteria and fungus.

These turtles need to be housed separately or in small clusters in a large aquarium. A number of turtles in a single aquarium may behave aggressively and injure one another. Minor scratches suffered by a turtle can lead to life threatening infections. It is thus important to check for flaws while buying a turtle as fighting an infection can be very challenging. To prevent infections, the turtle should be exposed to lots of sunshine, free space and fresh air. The wounds heal quicker when they are left outdoors.

The water in the aquarium should be maintained in a temperature ranging between 22° C to 25°  C. The water should be neutral or slightly acidic, ranging between 6.5 to 7 pH range. The aquarium should be built in a way so as to avoid causing any injuries or abrasions to their shell or carapace. An incandescent light should be used to provide them with basking heat. It is not necessary to provide them with UVB fluorescent lighting.

Spiny softshell turtles in captivity can be fed with dog food and meat, with individuals having carapace length more than 8 inches should be fed low protein/low fat dog food. They can also be fed small fishes and invertebrates.

It is advisable not to handle these turtles unless it is absolutely necessary as they can sometimes behave aggressively and bite.

Habitat destruction by humans and using these turtles as a food source has been instrumental in reducing their numbers. However, the Spiny Softshell Turtles are listed in the category of “Least Concern” by the IUCN.

Here are some images showing these beautiful turtles: 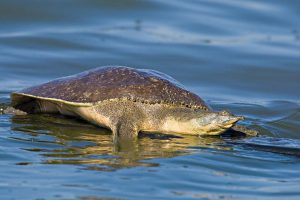 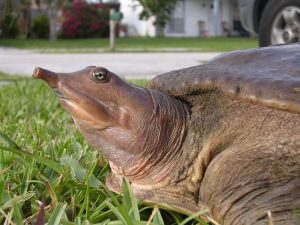 The spiny softshell turtles are a beautiful species. The small turtles make cute pets and they are quite amazing to watch.