Leatherback Turtle is the largest of the living turtle species. Its name “leatherback” is coined due to its unique physical characteristic of a rubber-like carapace which is made of oil saturated connective tissue. Leatherback turtle is the only member of the genus Dermochelys, which belongs to the family Dermochelyidae. 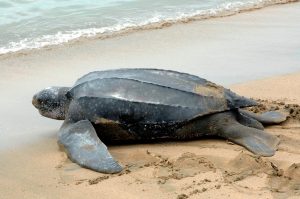 Laetherback turtle is the only turtle without a hard shell carapace. It has a tear-drop shaped body. Its carapace is composed of a leathery skin with tiny bone plates without a scale. Instead of boney plates or scutes like other turtles, this unique turtle has its shell composed of several fused bones. The carapace is usually dark grey or black with tiny white spots. It has white to black plastron with 5 longitudinal ridges. The plastron and the carapace do not have a sharp boundary and they are fused together. The underside of the shell or the plastron is grey, black, pink or white.

They have a pair of front flippers and do not have claws. These flippers are large compared to their body and can grow up to 2.7m.

The hatchlings are balck with white marginal flippers.

Geographical distribution of leatherback turtles range from low to mid-latitudes. They extend from Alaska and Norway to the North and the British Isles towards the south to the Cape of Good Hope and Australia. They are found in Tropical and Sub-tropical Ocean, extending to the Artic Circle. They are found in the eastern coast of the continent, extending from Nova Scotia, Florida, Puerto Rico, Mexico and Virgin Islands. They are also found in the ilands of Hawaii. Some of their breeding grounds are Madagascar, Malaysia, Senegal, Ceylon, Papua New Guinea and Thailand.

Leatherback Turtles are the pelagic animal (Open Ocean). They are highly migratory and forage in the coastal waters. They are active in low temperature water below 40 degree Fahrenheit. They are found in reefs, tropical and temperate waters. Their huge barrel-shaped body with a leather-like carapace maintains their core body temperature even if the outside temperature is cooler. Therefore, they can survive in cooler ocean temperature where the other marine reptiles cannot. 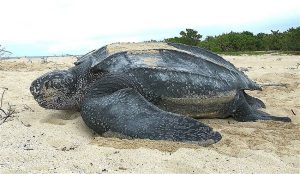 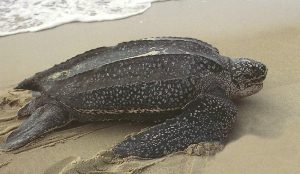 Leatherback turtles have evolved during the cretaceous period about 110 million years ago. It is the only extant member of the family Dermochelyidae. They are relative to the Cheloniidae family which has six family members.

The juvenile leatherback turtle stay in the tropical water, usually near the coast where the temperature is warmer than 26 degree Celsius. Once they grow big enough and their carapace reaches the length of 100cm, they go out to the open ocean and can live in a temperature below 10 degree Celsius. The only times that they stay ashore is when the female lays eggs and when the juvenile make their way towards the ocean.

Leatherback Turtle have a life expectancy of about 35 to 40 years.

Leatherback Turtle has a large diet given their low energy. Their diet consists mainly of soft-bodied creatures like jellyfish and they can feed on at least 50 large jellyfishes everyday. Apart from jellyfishes, it feeds on salps, sea squirts, pyrosomas, tunicates, sea urchins, crustaceans, floating sea weeds, fishes and blue-green algae. 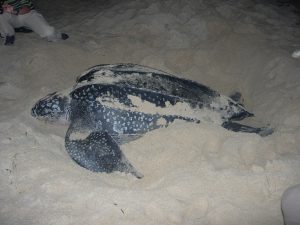 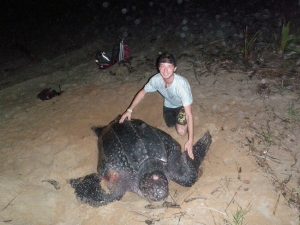 The nesting ground for the leatherback turtle in the West Pacific Ocean are Papua New Guinea, Australia, Solomon Islands and Vanuata. Nesting grounds have been located at the eastern grounds of North America and Newfoundland. Atlantic Canada has one of the largest foraging populations. Nesting beaches has become a popular tourist spot which ultimately leads to the decline in the population of the leatherback turtle. An example of such nesting spot is the Pacific coast of Mexico.

Leatherback turtles reach their sexual maturity in 6 to 12 years. The male has a concave plastron which helps during the intercourse. They mate at the shallow tropical waters. The female comes out to the coastal areas during the night to nest and chooses a location which has a favorable condition, free from rock, vegetation, woods, debris and that has a gentle slope. She digs a hole by removing the sand with her flippers. She digs a deeper chamber for the eggs and makes sure that the sand is of the right texture so that the chamber does not collapse. 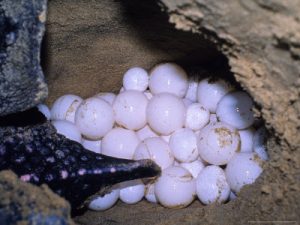 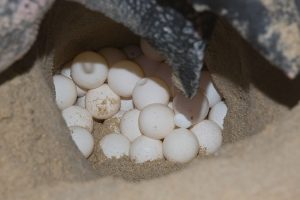 The leatherback turtle does not respond when they are nesting. They lay about 70 fertile eggs along with approximately 40 infertile ones. The incubation period lasts for 55 to 75 days.

After laying the eggs, she retreats to the ocean. The female breeds almost 7 times within a season at an interval of about 9 days. They nest at an interval of 2 to 3 years. The gender of the hatchlings is determined by the temperature in which they have been hatched. Cooler temperature produces males and the warmer nest produces females.

Leatherback turtles take a long distance migration from their breeding to feeding areas. At an average they migrate about 3700 miles. Evidences from satellite tracking have shown that the leatherback turtles nesting in Costa Rica and Papua New Guinea have a common foraging area in the South Western Pacific. 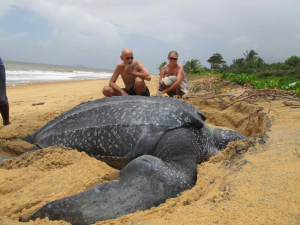 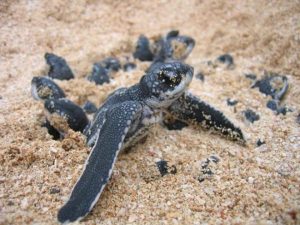 Their mortality rate has been adversely affected by the incidental capture in fishing gears, traps and pots, gillnets, trawls, dredges and longlines.

The leatherback turtles nest on beaches. The coastal grounds are destroyed due to expansion of villages and other infrastructural developments. The beaches are affected by small boat traffics and other constructions.

Water pollution has hampered the leatherback turtle population. Plastics, old fishing gears and other harmful substances get entangled in the throat if they eat it, since they often mistake a floating plastic for a jelly fish. Chemical substances and oil causes diseases and therefore weaken them.

Global warming can adversely affect the population of the leatherback turtles. Increase in sea level, storm and cyclones due to global warming impact, can erode the coastal grounds thereby eroding the nesting grounds. Since the temperature of the nest determines the gender of the turtle, global warming can indirectly influence the ratio of the sexes. 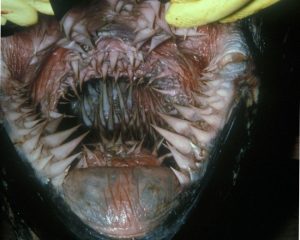 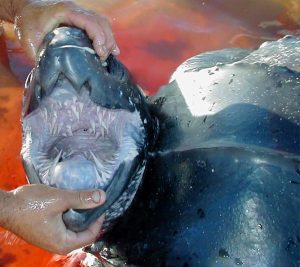 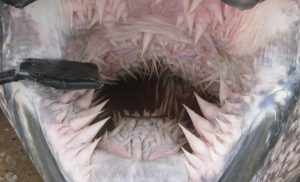 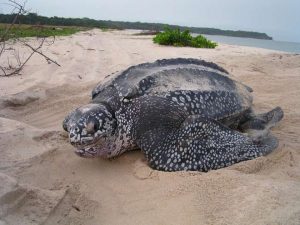