Size: Average size of this species is 4 – 6 inches, but at times they reach more than seven inches in length.

Weight: An adult of this turtle weighs around five pounds.

Body and Carapace: This species have dome-like shell and an attached plastron which makes the whole carapace closure. Eastern box turtle have a horned, sharp beak and webbed feet at the base. On each front leg, this species have five toes whereas they have three to four hind legs on each hind leg.  The carapace is covered with a keratin layer. The plastron of the female is flat, whereas the male’s is concave.

Color: The colors of the shells are generally black or brownish, but it can also be of black with orange or yellow patterns of blotches, spots and lines at times. Like the carapace, the skin color is also black or brown with some orange, red, white or yellow spots. Some isolated individuals have dark blue patches on front legs, throats or cheeks. 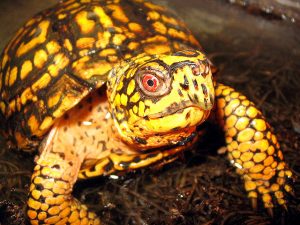 Though they are considered rare and uncommon in the Great Lakes region, yet some populations can be found in regions not bisected by roads with heavy traffic. In states like Indiana and Michigan, they are a species of ‘Special Concern’.

This turtle species likes to stay in deciduous forest areas with somewhat moist forest floor which has go drainage. They prefer bottomland forest compared to ridges or hillsides. They can also be spotted in moist ground, under fallen logs, pastures and open grasslands. At times, Eastern box turtle ‘bath’ in ponds, puddles or in shallow streams. During hot weather, this turtle tend to submerge itself in mud.

Starting from October – November to March – April, this species hibernates in its northern range. In upland forest regions, they overwinter by staying few inches deep in the soil surface, which is covered by woody debris or leaf litter. They burrow into the ground when soil temperature goes down. Generally, overwintering is not common, even though most of them tend to overwinter within close proximity of each other. During warm spells in early spring or in winter, few individuals may come out prematurely. In spring, Eastern box turtles start mating.

Behavioral pattern of this turtle is as interesting as its appearance.

The feeding habits of this turtle species alters because of individual taste, lighting, temperature, and also the environment they live in. Their metabolism does not push their appetite. They can diminish the level of their activity, diminish their ingestion and retreat into their hard shells till better conditions spring up.

They are an opportunistic omnivore species in the wild, where they feed on various kinds of vegetables and animals. Their diet includes snails, earthworms, grubs, slugs, beetles, grasses, caterpillars, fallen fruit, mushrooms, duck weed, carrion, berries, bread and flowers. Recent studies suggest that they also feed on live birds caught by net. In captivity, they have been observed to consume things like eggs or even hamburger even if it does not fall into their regular diet.

This species is also known to eat poisonous fungi which make their flesh inedible. Anecdotal evidence reveals that hatchlings are more carnivorous compared to adult Eastern box turtles, but there is no solid evidence in favor of that theory. 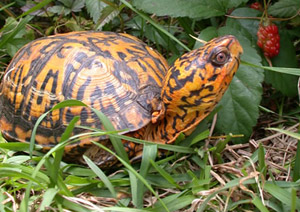 Female Eastern box turtles reach their sexual maturity at the age of 13 years. Their mating season starts from April and continue till October. Mating is quite timeserving and courtship starts with male biting, shoving and circulating the female. Premounting as well as copulatory stages take place. Female turtles are known to store sperm and lay eggs after 4 years from mating.

Females nest around June – July and they also travel long distances in search of a proper nesting habitat. They may travel about 1 mile during their journey. Nestling places may be in meadows, woodland openings, cultivated gardens, roadsides, residential lawns or beach dunes. Sometime, female lay eggs in close proximity to last part of the year. Generally, female begin nestling during late afternoon or early in the evening and go on for five hours.

In its natural habitat, this species live for over 100 years, but in captivity their life span has been recorded around 40 years.

Juvenile turtles have several predators. One can hardly see an adult becoming a prey as their hard shell tends to protect them. Any and all carnivores and omnivore in the wild are preadtors of this cute looking turtle species.

This species is crepuscular, that means they are active during dusk and dawn.

Here is a brief care sheet of this turtle :

Here are some interesting facts about this species –

International Union for Conservation of Nature (IUCN) has listed this species as ‘Vulnerable’. Industrial development, habitat destruction and road mortality are some of the major reasons why their numbers are decreasing in recent years.

Here are some images of this beautiful turtle species. 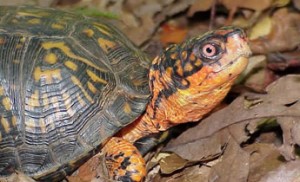 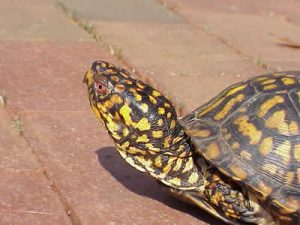 One response to “Eastern box turtle”