The ornate box turtle, alternatively known as the western box turtle, is a species of reptile with a slow growth rate. Consisting of two subspecies, they are found across a large area of the American Midwest, Southwest, and Northern Mexico. 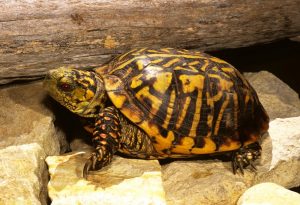 Size: Length of the carapace of the ornate box turtle is 4.72 inches, while the size of the plastron averages 4.72 and 4.52 inches in males and females respectively.

Color: Carapace, head, limbs and the tail are dark brown to black in color. Thick yellow lines surround the scutes, while the shells have concentric rings that are used to ascertain their age. Adults have yellow spots on the heads.

Sexual Dimorphism: Females are larger than males, while the latter are more colorful. The eye color also differs, being bright red for males and brown or black for females. Males also have large-sized, curved inner claws on the back feet, thick tail, and deep reddish legs.

The nominate subspecies prefers grasslands at average heights of 4,920 ft (1,500 m). The desert box turtle can be found in more arid environments, specifically, semi-deserts and deserts with low humidity and soil temperature, while the air temperature should be high. 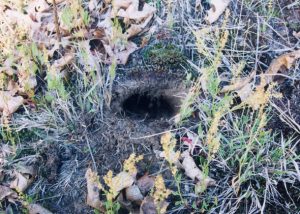 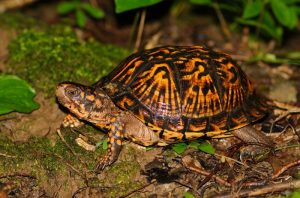 Mating season for the ornate box turtle occurs between the months of April and July. Both sexes engage in polygynandry, with the females storing the sperm of males for long periods. A clutch or two are laid in a year. Several males often pursue one female, which leaves them to fight amongst each other until there is a winner, who gets to copulate with her. The gestation period is about 50 days, after which the female lays a clutch of up to eight eggs, once a day, either two hours after sunrise or before sunset. 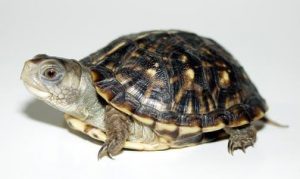 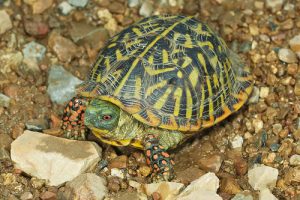 They usually survive in the wild for between 30-37 years, with the oldest recorded individual being more than 40 years old.

Data gathered on the communication methods of ornate box turtles are highly inadequate at this point.

Ornate box turtles are omnivores. Their feeding preferences change according to availability. They may eat grasshoppers, beetles, earthworms, slugs, plants and fruits. Among the plants, they mostly prefer dandelions, mulberries, and prickly pears. They have even been seen feeding on carcasses, feces, and small fish. 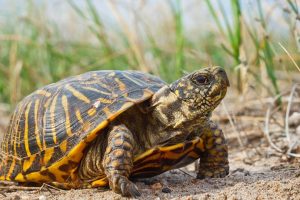 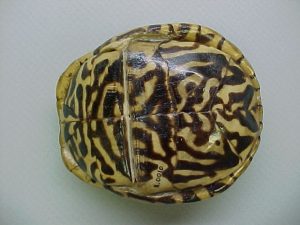 The IUCN Red List has categorized the ornate box turtle (both subspecies) as ‘Near Threatened’ as their population trend is on a decline. 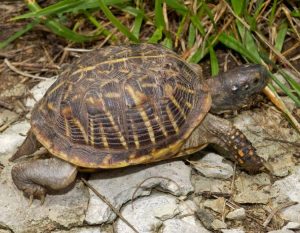 Ornate box turtles are a rather a popular choice as pets, probably since they are readily available. But in case you are hoping to keep one as a pet, certain things need to be kept in mind.

Being delicate in nature it will need just the right amount of care to stay at optimum health. Provide it with an appropriately sized cage for its indoor habitat, though it would do best if you let it stay in its outdoor habitat for most of the day.

Get all the necessary information from the vendor you buy it.

If you see your turtle to have puffy or swollen eyes or discharge from the nose or eyes, take it to the veterinarian as soon as possible. 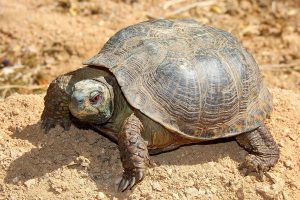 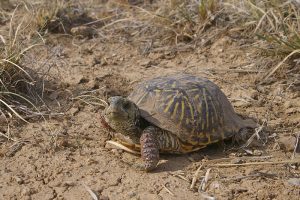 One response to “Ornate Box Turtle”