The Florida Softshell Turtle is a species of American freshwater turtles, and is one of the 26 species of turtles found in Florida. They are the largest of the New World softshell turtles with the most Old World characteristics of the Old World, like its longitudinally wrinkled carapace, tolerance for brackish water, and relatively large size. 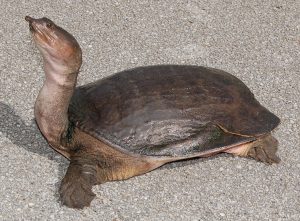 Gender Identification: The females are larger than males, making them sexually dimorphic.

Size: The males measure from 6-12 inches, while the females are double in length being 11-24 inches.

Weight: They can weigh up to 20 kg. The females are heavier.

Shell/Carapace: The shell is leathery, covered with skin, having a white or cream underside. It is soft around the edges (and hence the name).

Feet: Feet are webbed and strong, ending in sharp claws.

Nose: They have round and long nose that sticks above the water while swimming.

Neck: The neck of these turtles are quite long.

These reptiles may live for more than 20 years in the wild, and 30+ years in captivity.

The Florida softshell turtles are native to the Southeastern United States, and are found throughout the Florida Peninsula. They are also distributed through further north in the coastal plain regions of southern South Carolina and Georgia. The reptiles also range westward to near Mobile Bay in Alabama.

These turtles prefer dwelling in slow-moving fresh water bodies that have sand or mud bottoms. However, at times, they also enter brackish water near the mouths of streams. 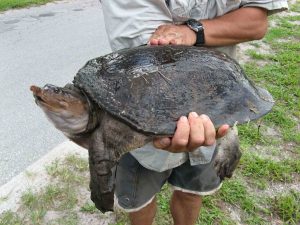 These turtles are primarily aquatic, and would spend most of the time in the water. However, they are equally adept to both land and water, and have the ability to move at quick pace in both. When on land, they are often seen buried in the soft mud or under sand in and around their habitat. While basking, they rest upon floating vegetation, logs, or in the muddy banks. These creatures hunt and chase down prey. Scavenging is also a part of their eating habits. At times, they have been seen burying themselves under sand with their heads exposed and attack unsuspecting prey when it comes within their reach.

In mild temperature conditions, the Florida softshell turtles can remain active round the year, while during cold weather, they are practically inactive. In the northern regions of their habitat, these turtles hibernate during the coldest time of winter. They are able to tolerate long submergence times under water, especially during the time when they are inactive and the water is cold and with a high concentration of oxygen. Gas exchange can occur through their skin and probably through the cloacal membranes.

The Florida softshell turtles prefer to move overland in search of better conditions, which is not very common with the other species of softshell turtles. This is one behavior which is responsible for on-road mortality. They are also able to withstand high temperatures found in their shallow water habitats of these creatures. The maximum temperatures that have been reported for this turtle ranged from 38.9 and 42.3°C.

The Florida softshell turtles are primarily carnivorous, thriving on aquatic crustaceans, insects, mollusks, amphibians, etc. They mostly consume fish and snails. However, they are also known to prey upon waterfowls like ducks, and even small-size herons. In the zoo or in captivity, they would eat worms, mice, fish, and a gel diet. 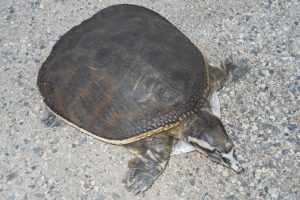 There is very little data about the mating habits of these reptiles. In southern Florida, the time of nesting is between mid-March and July, while in further North, it is between June and July. In a single season, the female of the species can nest 2-7 times, and are able to produce almost 225 eggs every year. This count is more than almost any other species of reptiles.

During the day, the female would leave the water for digging nesting holes near the edge of the water, mostly in the sandy area. After a successful mating with the male, the females lay 10–30 eggs at a time. Surprisingly, they would even use newly-constructed nests made by the alligators in order to take advantage of the protective supervision of the female alligator.

Once the eggs can survive predation, the hatchlings would come out 2–3 months. These baby turtles are tiny, of about 1.25 inches in size, and have bright patterns all over. They have gray spots on an olive-yellow base, and have orange and yellow marks on their heads, with their carapace having a yellow outline. However, as the juveniles start aging, they begin losing these colorations. The young reptiles need to stay hidden as much as possible, since they make an ideal meal for many predators. Once the female leaves the site of the nest, there is no further parental care in the eggs or the young. 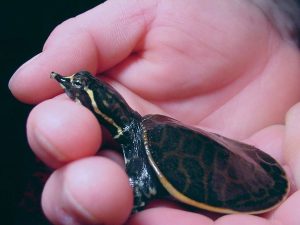 The alligators are the commonest predators of the adult turtles. Crows like fish crow, foxes, raccoons, skunks, raptors, raccoons, American black bear, etc. mostly eat the juveniles or the eggs.

The Florida softshell turtle is not a threatened species. The IUCN 3.1 has categorized them under the ‘LC’ (Least Concern) species list. 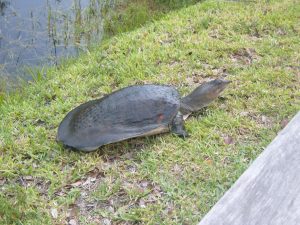 Keeping them in community habitats, along with other species of turtles, is not a good idea, since they are too aggressive. Keeping a female Florida softshell as a pet is also not recommended, since the adult females get very big and require a large amount of space.

Tank: The water should be as deep as possible. A 75 gallon aquarium is the minimum requirement. However, a 90 gallon or larger is preferable. A basking spot should also be provided. A smooth glass shelf submerged just below the water surface would let them rest underwater, and at the same time, help them breathe, reaching their neck up. 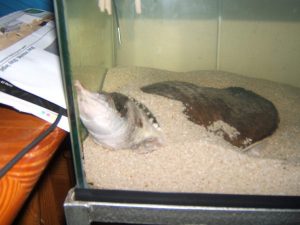 Decoration: If a substrate is made, it should be fine gravel or sand. Both live aquatic plants and artificial plants are recommended. But they might dislodge these decorations while burying under the substrate.

Heating and Lighting: A UVB lighting is needed for them to stay warm. Arranging for a heat lamp over their basking spot should also serve the purpose. Since they are not much active in cold conditions, a submersible heater is also suggested. 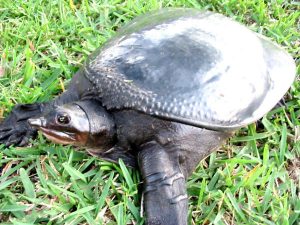