Neritina natalensis is a popular freshwater snail having striped operculum. This is one of the rare species of neritina. It has a specific geographical distribution and diet that makes them unique. These snails are petted worldwide owing to its beauty and behavior.

They are also known as Zebra Nerite snails and Tiger Nerite Snails.

This freshwater nerite snail belongs to the family of Neritidae, having a striking colorful operculum.

Color: The operculum of this invertebrate has black patterns running in a zig-zag fashion on a yellowish base. Shells may also be yellow-lime in color.

Length: They have a bodily length of 2.5 cm. 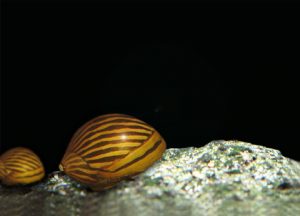 This particular species of snail is a native of Africa encompassing eastern, northwestern and southern Africa including Mozambique’s coastal lowlands, Kenya, Somalia and Tanzania.

These snails live in mountain and forest streams as they are freshwater habitats. These are its ideal habitats as they can feed on algae spread over rocks and crevices. In East Africa, they are found in the lagoons and mangrove swamps. They are able to tolerate both warm and cold water.

Read about the behavioral characteristics of this snail.

These snails largely survive on algae but may also eat vegetable matter. Algae laden rocks and leaves are ideal for these snails as they get enough food from them. They refrain from eating plants and meaty food.

They have a complex breeding procedure. They do not breed in freshwater instead breed in slightly brackish water.

Initially young larvae do not crawl like the adults but they swim. 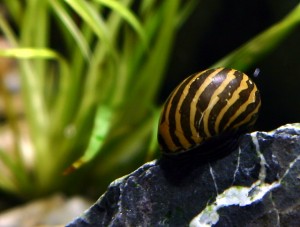 They have slow growth rate.

Freshwater fishes like Cichlids and Loaches are the regular predators of this species.

Housing: Right water temperature and conditions are required for keeping them in the aquariums. Large tanks are best for their survival and if at all it is kept in a small tank, make sure it has a good filtration system.Calcium supplement can be added into the tank for making the water worth living. Feeding: Though they generally feed on algae, you can also give them food supplements rich in calcium.

Care: They should be kept in well filtered water, for more queries you may consult a professional. As they have a tendency to crawl out of the tanks, care should be taken to keep them back into the water or keep the tanks covered.

IUCN has insufficient data regarding this species of snail.

These snails are peaceful and harmless to its surroundings, which is why they are preferred by hobbyists. You can often see them escaping from tanks if measures not taken to check this tendency.

Some images of Neritina natalensis have been listed here. 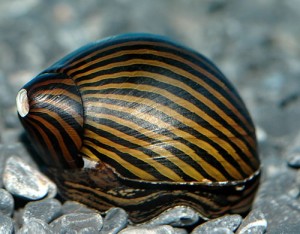 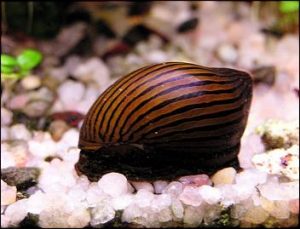