Pomacea canaliculata is a South American freshwater apple snail. It is an aquatic gastropod mollusk belonging to the “Ampullariidae” family. It is also known by its common name, the channeled applesnail. This species is also present in the list of top 100 “World’s Worst Invasive Alien Species”. 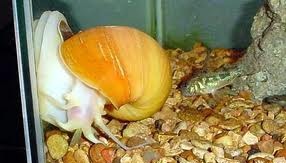 Size and Height: The Pomacea canaliculata is a large-sized snail. Their bodies can have a width of 6 cm and a height of 8 cm, while the size of their shells can extend up to 15 cm. Specimens living in the wild are a bit larger than those available in the pet trade.

Shells: The globular-shaped shells can have a wide variety of coloration. Banded patterns of black, brown, green or yellow may be present. Some specimens may also have albino or gold coloration. An indented suture separates the 5 or 6 whorls. This has earned it the name ‘channeled’ or ‘canaliculata’. The shell aperture or opening is large and round. The males have a more rounded aperture compared to the more oval-shaped aperture of the females. The umbilicus is deep and large. Shell growth accelerates during the spring and summer months and stagnates during the fall and winter. Shells of older snails are relatively heavier compared to the younger snails.

Operculum: The operculum is somewhat thick and corneous. It has a concentric structure with the nucleus at the shell center. The operculum in the younger snails has a lighter coloration; it turns to dark brown as the snail gets older. The snail can retract the operculum in its shell opening or aperture.

Body: The body color may vary from yellow to brown to almost completely black. The siphon is covered with yellow spots. The snail will keep its tentacles curled under the shell when at rest.

These snails are amphibious creatures that for most of the day are fond of remaining submerged in the water. They like to hide themselves in the aquatic vegetation near the surface and the border of freshwater lakes. They are somewhat dormant during the day and are more active at night. They are voracious eaters of green vegetation and can also leave their watery habitat and wander on the land in search of food.

The movement and activity of these snails depend greatly on the water temperature. They may feel energetic and lively at a temperature of 25°C while at 18°C they may hardly move. These snails are however more tolerant of lower temperatures than the other snails belonging to the genus Pomacea.

These snails are highly polyphagous in nature. They are primarily macrophytophagous, which means that they mostly feed on submersed and floating higher plants. They also feed on animal matter and detritus.

They eat most plants but have distaste for planted aquaria. It has also been seen that they don’t like to eat water hyacinth plants in Hawai’i.

These snails are commonly found in the tropical and subtropical regions of South America, including Brazil, Uruguay, Paraguay, Bolivia and Argentina. These snails have their southernmost home in South America in the Paso de las Piedras reservoir located on the south of Buenos Aires in Argentina.

It is also a resident of United States and can be seen in many locations in Alabama; in Jacksonville, Florida; in Little Wekiva River, Orlando; in Lake Mirimar, San Diego County, California; in Yuma, Arizona, the Dominican Republic, Guam, Hawai’i and Papua New Guinea. It can also be found in some parts of Asia, such as Sri Lanka, Indonesia, Vietnam, Philippines, Thailand, Japan, Hong Kong, Taiwan, Korea, Cambodia, Malaysia, Laos as well as in southern parts of China and Singapore.

There is a wide array of predators that feed on these snails. A comprehensive list of these predators is given below.

These snails are quite well adapted to survive in areas where alternate periods of drought and excessive rainfall characterize the weather conditions. These amphibious creatures are equipped with a shell door which they can close to protect their shell from drying out. 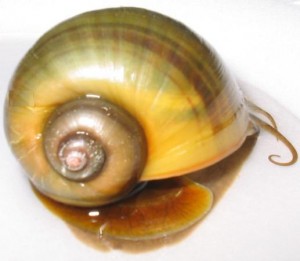 Their respiration system combines a bronchial respiration system with a lung which helps them to survive easily on water as well as on land. The lungs not only help in aerial respiration but also help the snail to float in water by adjusting the buoyancy level. Without this function, the weight of the shell would have made the snail sink down to the bottom of the lake.

One of the very basic methods they use to survive against possible predators is to camouflage themselves against the environment they are in. They can also retract their bodies and tentacles into their shells and then close their shells to protect themselves from small fishes and water bugs. They often wiggle their shell to get rid of dangerous insects and animals.

They do not depend on their vision to evade predators as this sensory organ is not very developed in these creatures. On the other hand, they have strong sensory abilities that help them to detect predators from their odor. They can also associate certain odors to certain specific predators. This mechanism is so finely tuned in them that they can detect even the finest and the most subtle odors and react accordingly. For example, they can easily detect the body juices of a crushed snail and understand that a predator is nearby.

When channeled applesnails mate, the female snail is approached and grabbed by the male from the behind. As he reaches the last spiral of the female’s shell, he tightly grasps her aperture and uses his penile sheath to hold her. The male snail then inserts his penis inside her genital tract. The male and the female snail stay in this position for the entire copulating period. The female might move a little during this period and may even continue to feed herself, while the male will keep his head covered under his shell. The male will relentlessly hold on to the female during copulation and will not lose his grip even if they are both lifted out of the water.

The female snails are quite capable of storing potent sperm within her genital tract for several months. This enables the female to produce eggs even if she has not been with a male for several months since the last copulating instance. Generally these snails don’t interbreed with other applesnail species but they have been found sometimes to mate with Pomacea diffusa.

The Pomacea canaliculata female lays her eggs on a solid ground around 20 inches above the surface of the water. An average clutch may contain anywhere between 200 to 600 eggs. Each egg measures about 0.9 to 1.4 mm in diameter. The eggs are pinkish in color and hatch in about one or two weeks.

The average life span of these snails is up to 4 years.

Channeled applesnails are often kept as pets and provided certain specific guidelines are followed, it is not very difficult to provide care for them.

Tank: The tank should have enough capacity to hold around 3.5 gallons of water as well as have some dry space above it. Younger snails can be kept at much smaller tanks but these snails grow up very fast and it is better to provide them with a larger home from the very beginning. It is best to keep one adult snail in a tank; two snails of opposite sex can be kept if you are intending to breed young snails. The tank or the aquarium should be provided with a coverplate to make sure that they don’t get out of the tank. Although they can survive out of water for weeks, they risk of breaking their shell while trying to do so.

Water: Ideally, the water content of the tank should be at least two times or more of the shell height. These snails can live in clean water rich in oxygen as well as in water with poor oxygen and rotting organic wastes. The water should not be soft; i.e., it should be rich in calcium as this helps the snails to develop a strong shell and avoid any chances of shell damage. It is however natural for the snails to develop some holes in the older parts of their shell.

The water should not contain copper or any other harmful metals as they can prove to be toxic for the snails. Aquasafe or EDTA should then be used to purify the water. The water should be regularly changed especially if there is more than one snail in the tank.

The tank should not be filled entirely with water. Instead, an air space should be provided at the top of the tank for the females to lay their eggs. The space provided should be equivalent to the size of the snail. If the females don’t find an adequate space to drop their eggs, they will do so under the water which will drown the eggs.

Light: These snails are more active during the day and so providing them with adequate light will keep them active and energetic. A standard aquarium light will do; there is no need of TL-tubes.

Temperature: The water temperature should ideally be kept between 18°C and 28°C. In these high temperatures, the Pomacea canaliculata eats, creeps and grows faster. In lower temperatures, they get very inactive and sit at the base of the tank almost motionlessly. At temperatures below 18°C, these snails also face a high mortality risk.

Handling the eggs: The environment where the eggs are stored should be moist but not wet. The eggs should not be kept under water under any circumstances; otherwise the embryos will drown. Optimum range of temperature for the eggs should be kept between 18°C and 28°C. The eggs will hatch quicker if the temperature is kept higher.

Transferring the eggs to another tank can be done provided not much damage is caused to the eggs. Damaged eggs are prone to suffer from infections and evaporation.

Normally it takes two weeks for the hatchlings to come out of the eggs. If they don’t come out even after three weeks, you can break the clutch and help the snails to come out.

Here are some interesting facts about these snails:

Here are some images showing these snails in their natural environment. Note the intricate spiral design of their shells which is one of their special physical characteristics. 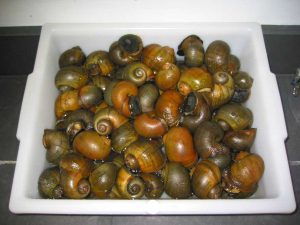 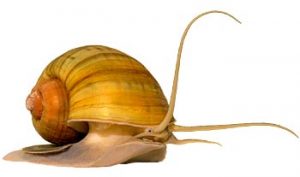 The Pomacea canaliculata are quite an agile species and can live in diverse water conditions. They are also well adapted to live on land. Although they often prove to be a threat to rice cultivation, these snails are often bred for food or even kept as pets.