Melanoides Tuberculata, also known as red-rimmed melania is a freshwater snail. Belonging to the genus Melanoides, it is commonly found in parts of southern Asia and Africa. Their names have been derived from rust-like reddish spots bearing on the shells. Melanoides Tuberculata is known for their burrowing nature.

Melanoides Tuberculata is also known by several other common names:

Size: These snails grow up to a length of 20-27mm and at times even 30-36mm. There are certain types of fresh water snails that are 80mm long.

Color: These snails are commonly known as red-rimmed melania because of their reddish spots. The shells are light brown having rust-colored dots.

Shells: The shells stretch quite long and are conical in shape. Shells have 10-15 coils. 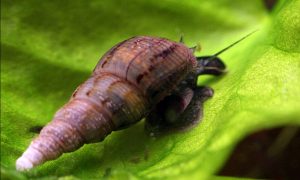 Here are a few behavioral traits of the freshwater snail:

When in tanks these creatures are fed with fish food, par-boiled vegetables and fruits.

This snail has also been found in some other parts of the world. These areas have been recent additions i.e. these regions are not indigenous to the Melanoides Tuberculata. Due to heavy imports this species have been found in United States, Cuba, Brazil, and Germany. The distribution of these snails is expanding in many other exotic locations.

These species prefer warm climates. They tend to live in temperatures ranging from 18 to 25 degree C and 18 to 32 degree C. 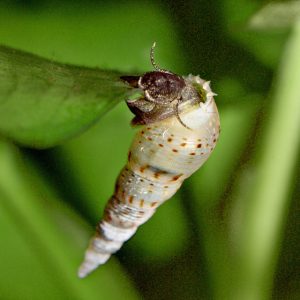 These snails are largely threatened by fishes. Clea helena and Cray fishes are snail eating aquatic predators which pose threat to this snail.

The Red-rimmed Melania are found to be great water-indicators. When seen above water it indicates something gravely wrong in the quality of the water. They cannot bear high saline waters. They are resistant to some other factors like high pH levels and low oxygen saturation levels. Water with high pH levels tend to break down their shell.

They usually have a great number of offspring. The Red-rimmed Melania females are known to be:

Usually there are about 1 to 64 embryos in a brood pouch. They start reproducing when they reach the length of 5mm or 10mm. Eggs tend to be 60 to 90mm in diameter. A parent melanoides tuberculata has a shell size of 20mm which happens due to carrying 70 offspring.

These creatures are 1.2-2.2mm when they are born. They have very slow growth rate and reach maturity slowly. They normally become mature when they measure 25mm. A young one reaches 5mm before it leaves the parent.

These animals are known to carry parasites that are considered dangerous for humans. These species act as the host to trematode parasite which infects fountain darter, a Texan endangered fish.

In certain parts of China these creatures have been termed as agricultural pests. There have been reports of damage in Hong Kong’s Chinese cabbage plantations. These snails are territorial in nature. They erase competitions from native snail populations. Local snails have been known to become extinct because of melanoides tuberculata.

The IUCN or International Union for Conservation of Nature has listed them on the ‘Least Concern’ category.

Given here are a few interesting facts about the snails:

Here are a few images of the fresh water snail. 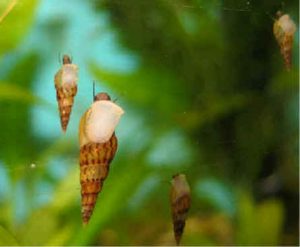 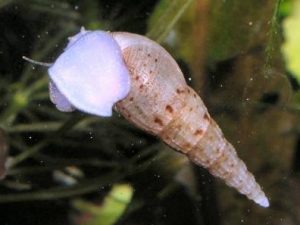