Tufted Ducks are medium sized birds having striking physical appearance. They are found in large numbers, especially in the European region. Male and female tufted ducks can be distinguished easily by their physical features. They have distinct habitat, dietary patterns and physical characteristics that can be learnt below.

North American Ring-necked Duck is considered to be similar to this species.

Belonging to the family of Anatidae, gender of these ducks can be identified by their distinct physical appearance having a glossy texture. 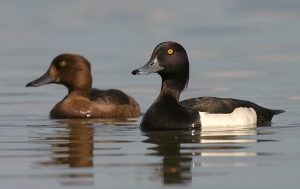 Tufts: They have tufts on their head that sets them apart from the rest.

Color: Breast, neck and head of the males are black in color while the sides are white. Eyes of the ducks are a mix of yellow and orange colors.

Females are characterized by dark chocolaty brown color on the entire body except the flanks that are lighter than the rest.Males have grayish black beaks with a hint of black at the tip. The female ducks have a bluish grey bill.

Size: They are 40 to 45 cm in length and their wing-span ranges around 70 cm. Females are smaller than the males.

These ducks are originally a species of Eurasia though they can be spotted along the coasts of United States (northern areas).

It has a varied range scattered over UK and Europe with breeding locations encompass UK, Germany, France and Poland.

This species of ducks is migratory in nature and can be spotted in regions around the Persian Gulf, southern India, Mediterranean Sea and Saudi Arabia in certain months of the year. In fact, they migrate throughout Asia, Europe and Africa with occasional trips to North America as well.

In winters they leave north European shores and arrive in great numbers to UK, which they colonized in mid 19th century.  Tufted ducks in UK are mainly found in the Lough Neagh region.  Favorite haunts of these ducks are the lakes for obvious reasons that they provide them with ample food. 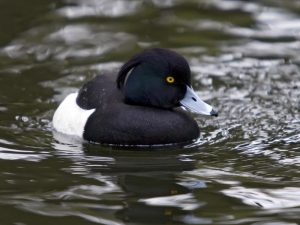 They do not breed during winters and this is when they can be found in coastal areas like inland seas and lagoons alongside estuaries and tidal bays. They usually refrain from living in areas having high tidal action.

During the breeding season, these ducks can be traced in areas around the lakes (shallow), islands and low lying regions. They prefer to rest around large, open, fresh water bodies like ponds, reservoirs, extensive solitary stretches along the lakes and so on, when they are breeding.

Know about the behavioral traits of this beautiful bird species.

Food habits of the tufted ducks are varied with snails, aquatic insects, seeds, plants, roots, small fishes, duckweeds and other creatures living in water. They are known for their quality to dive into the water to hunt for food, usually reaching as deep as three meters.

They make sounds during the breeding seasons otherwise they are generally quiet creatures. Females have a high pitched tone which is prominent during the mating season while the males limit themselves to whistles in soft tones.

Breeding season generally commences in May continuing till August. They are found breeding in pairs along with other birds like Gull, sharing the same location in large groups. Tufted ducks lay eggs in the lake sides or around small water bodies having plenty of vegetation to feed on during the breeding season. Around 9 to 10 eggs are laid by them, that are greenish in color.

They have been known to hang around in groups during the breeding season along with other birds as well. They make their tiny nests out of the available greens and feathers to conceal them from the predators into the depths of vegetation. Nests can also be seen above water on small islets.

Young ducklings arrive after an incubation period of 25 days, after which they start diving. It takes as many as 45 to 50 days for them to fully grow up and learn flying. 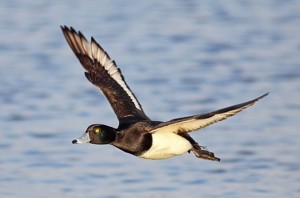 They live for around 4 years on an average.

These ducks can be petted as they are quiet and tamable. They have striking features and look lovely when found sailing or resting.

Housing: For keeping them as pet, ample water supply is essential as the bird is born to live in and around water bodies.

Feeding: You can feed them with aquatic vegetation, snails and other insects living in water.

Care: Get them checked with your local vet and also keep them indoors when need arises.

As per UK legislation, these ducks have been included in the list of a Species of Conservation Importance. They are considered as Least Concern birds according to IUCN.

Gather some very interesting facts about this quirky ducks.

Check out its pictures and get an idea as to how this bird looks. 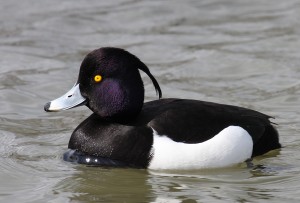 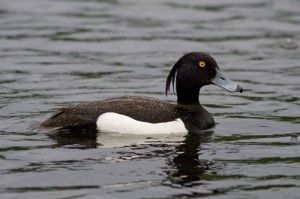