Mandarin ducks belong to the family of Anatidae and have been a recurring symbol in Chinese folklore. These medium sized ducks are one of the most striking waterfowls with flamboyant appearance endowed by the sails and whiskers, though present only in the males. White mandarins are the prevalent mutative variety found in captivity beside many others.

Some of the distinct physical features of these ducks may be listed as:

Length : Length of these ducks varies between 40 and 49 cm approximately.

Wingspan : They have a wingspan ranging between 60 and 70 cm. 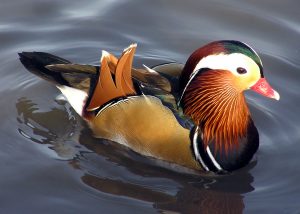 Color : Amazing color variations can be observed in the males with red bills and white semi circle above the eye. They have purple colored chest on which runs two perpendicular lines in white along with orange colored sails on its back. Females are paler with grey heads and stripes of white at the end of the eyes, resembling the wood ducks.

Chiefly native to China, it made a gradual entry to Britain and United States with the effort of breeders who introduced them to other parts of the globe. Their population can be traced to Southeast Russia, Southern England, Japan and Siberia apart from China.

They take refuge in forested areas having water sources close to it. Mountains having plenty of woodlands, marshes and streams are ideal for them to house in. With the approaching of breeding season they build their nests in cavities of trees close to the streams where they can obtain their food.

Some of the typical behavioral traits can be noted here: 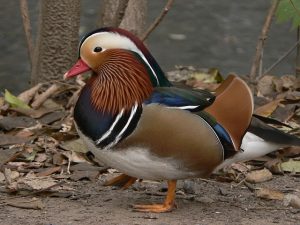 Migration is common among the groups inhabiting the Asian countries. By the time fall approaches, the ducklings get adapted to flying and flock with other mates. They travel to south Japan and eastern parts of China during the winters.

They emit sounds like ‘bifu’, ‘ge-ge’ and ‘wooing’. A kind of sound similar to ‘keet’ can be heard when they are calling out to their mates for mating. 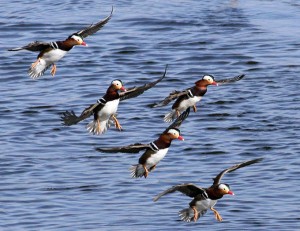 They have a smooth flight, assisted by a strong pair of wings.

A significant part of their diet is beechnut, apart from seeds and plants. However their diet is influenced by change in seasons. During summers, they feed on frogs, mollusks, small snakes, fish and dew worms whereas with the onset of winters they consume grains of various types.

Mating season begins before spring sets in, usually in the month of September. During this phase, they gather in flocks to indulge in impressing the females. The females select their respective partners in the wake of spring and continue with the process.

The females lay their eggs in different breeding habitats in the trees. During incubation, only the females play an active role as the males depart from participating in it. When the hatchlings emerge, they are taught to leap out from the nest by the mother who is subsequently followed to the nearest water body.

They have a life cycle which is no different from other ducks. Eggs are laid in the cavities of trees near streams. Eggs have varied colors from ivory to buff and measure around 56 mm. They make their nests out of branches and make it comfortable for the ducklings which emerge after a month. 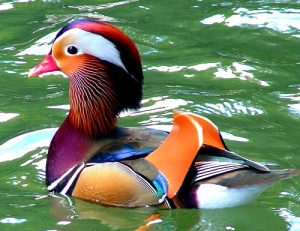 After hatching the juveniles follow their mothers and learn flying. They start eating on their own just a few days after they hatch and within the next six months they are totally independent.

Within a year, the females become sexually mature and lay between 10 and 12 eggs. Breeding season begins in late March continuing up to June.

They may live for around six years in the wild, which may increase when they are kept in captivity.

Geographical range influences the type of threat that they face. Some of the predators of these ducks are grass snakes, Mink, raccoon dogs, Eurasian eagle owls, polecats and otters. They are not safe due to the loss of habitats and hunters that are always on their prowl.

You can very well keep them as pets for which these conditions should be ensured:

Housing : Keep them in at least 6 ft high pens near a water body so that they can swim around and bathe in it.

Feeding : Feed them with non-medicated pellets and also give them grasses and egg shells. 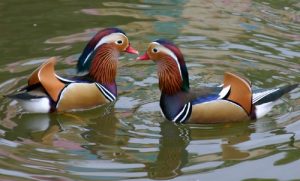 Care : Make sure to change water regularly as they need fresh water all the time.

According to the status listed by IUCN they are a Least Concern species.

Males are bestowed with such beauty and elegance that they become the best choice as pets.  A lot of their population has been destroyed by loggers, an impending threat to the forests.

Take a look at these Mandarin ducks listed here. 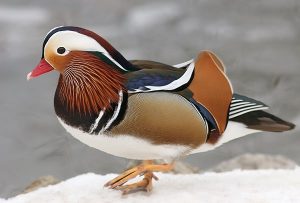 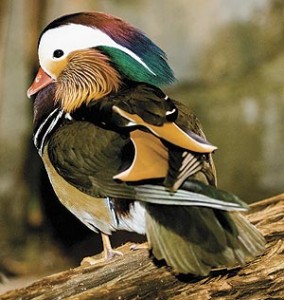 One response to “Mandarin Duck”