The Wood Duck, also known as Carolina Duck, is one of the most beautiful duck species from North America. They are not to be confused with the Australian Wood Duck. The American Wood Duck is a close relative of the Aix galericulata or Asian Mandarin Duck. 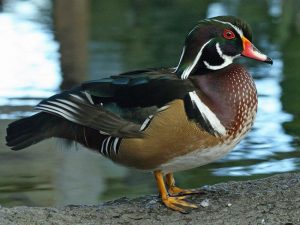 Here are the characteristic features of their appearance that help with their identification:

Size: The adult perching ducks can grow anywhere between 19 inches and 21 inches (47 m and 54 cm) in length.

Weight: The drake or adult male birds weigh around 1.5 lbs while the average weight of the females is around 1.4 lbs.

Color: The males are much more colorful than the females. Drakes have a colorful appearance with the top of their head being a metallic purple-green with distinct white stripes extending up the cheeks. There is a white stripe running along the dark face while the eyes and beak are bright red in color. The base of their bills is marked with yellow dots while the sides of their bodies are pale yellow with black-white stripes along the edges. They have dark red chest and rump with pale white belly, blackish back and dark tails. The brilliant blue-black wings are one of the most striking features of these birds. The females are dull brown in color with whitish throat and a white ring around the eyes. The juvenile birds resemble the females except for their mottled and streaked brownish belly.

Head: Both the drake and the hen have small crested heads.

Tail: It has a characteristic long, rectangular tail which is most visible during flights. 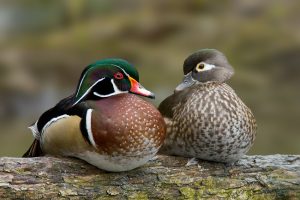 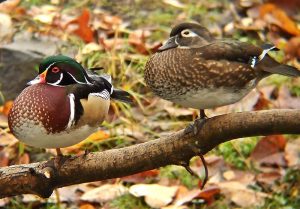 They prefer shallow or slow-moving waters near woodlands and live in freshwater wooded ponds, swamps, marshes, streams and rivers. Lakes and ponds having shoreline cover are also inhabited by these birds. Water bodies with woody debris such as stumps, logs and standing trees as well as green vegetation are most suitable for them.

What do They Eat?

The diet of these omnivorous creatures mainly consists of water plants like duckweed, watermeal, pondweeds, wild rice and smartweeds as well as aquatic insects and invertebrates (clams, snails). Adults also feed on fruits and acorns, especially during the seasons of winter and fall. They also eat seeds and berries. 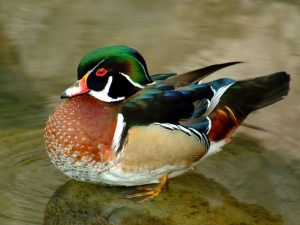 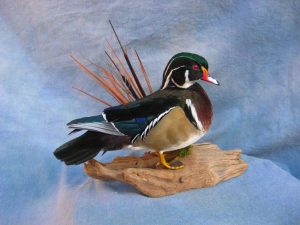 Wood Ducks have an interesting behaviour pattern that distinguishes them from other similar species: 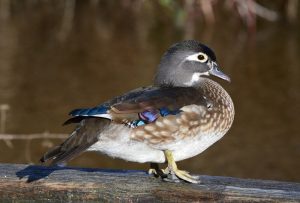 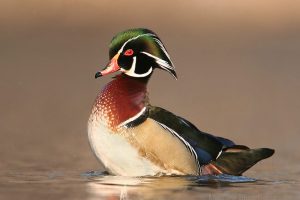 They are preyed upon by various carnivorous mammals like dogs, wolves, wild cats, foxes and skunks. Various birds of prey such as great horned owls, eagles, hawks, condors, falcons and vultures are also known to feed on the ducks. Other predators include various large reptiles, amphibians and fishes.

Their unique adaptive features help the birds to survive in their wild habitats: 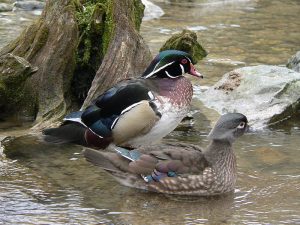 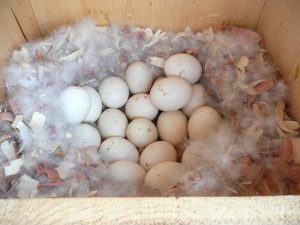 Wood Ducks attain reproductive maturity during the first year of their lives. During the courting season, the drakes swim in front of females with their tail and wings elevated to impress them. They may also perform specific preening, drinking and shaking movements during this time.

The males attract the females with their attractive breeding plumage and their distinctive calls. Then the drake and hen pair up for mating. After mating, they build a nest and the female lays 10 to 15 eggs in it. In case they cannot find any tree cavity, the birds often use nest boxes provided by humans.

This species often display “intraspecific brood parasitism” or egg-dumping behaviour. Females unable to find their own nesting holes visit the nests of other Wood Ducks to lay eggs and leave them there to be hatched by the female in the nest.

The incubation period of this species varies from 28 to 32 days, depending on populations and distribution range.

The eggs take a few weeks to hatch into ducklings. They are covered with dull brown feathers at the time of birth. The Wood ducklings leave the nest shortly after birth as they are raised in water instead of in the nest. The hen leaves the nest the morning after the hatching of the eggs. The female surveys the surrounding area for predators before flying to the ground and calling the brood. 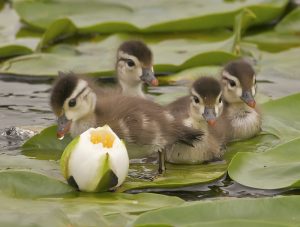 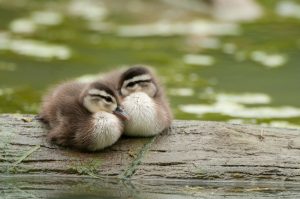 The ducklings then jump from the nest to the ground and find their way to the water body where they will be raised. The baby Wood Ducks often jump from great heights to land on the ground; they are known to be able to jump from up to 290 ft tall trees without any injuries. The Wood Ducks prefer to build their nest over water so that the young ducks can have an easier landing. The ducklings are able to swim and find food without the help of the adults from the next day after hatching. They become fully independent 56 to70 days after their birth.

Their average lifespan ranges between 3 years and 5 years in wild. However, they have a much longer life expectancy in captivity which extends up to 15 to 20 years. 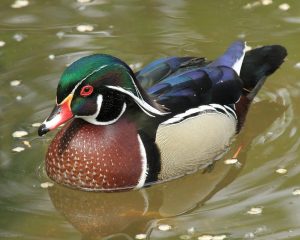 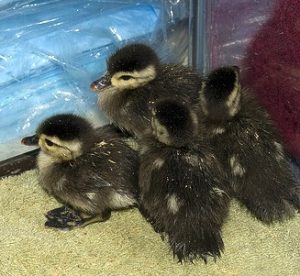 Adults make twelve distinct sounds for communicating with others of the species while ducklings have 5 different calls. The male’s call can be characterized as a sharp thin whistling that sounds like “jeeeeee”. The females make a high-pitched squeal “do-weep do-weep” and a sharp squeaking sound “cr-r-ek, cr-e-ek”. The latter is used as an alarm call to inform other duck of any nearby predators. Ducklings call to find and communicate with their mothers. 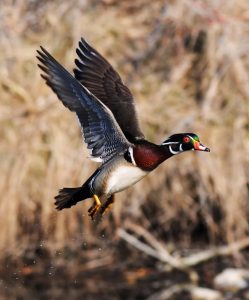 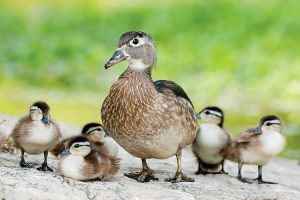 Their attractive appearance and peaceful nature make them valuable as pets. Here is some information regarding their housing and care:

Housing: It is essential to provide them with a large clean pond, at least 6 sq ft in size, with vegetation growth and woodlands surrounding it. One should keep them in a place resembling their natural habitat when in captivity. The trees should be tall with broad stems to allow the birds perch and nest in their cavities.

Nest Box: Despite providing them with plenty of woodland growth, one also has to place a few nest boxes in and around the area. The birds can nest in these boxes in case there are not cavities enough to fulfill their nesting needs. The dimensions of the box should ideally be 2 ft X 1 ft. The nest box should have a 4-inch broad door and a ramp at 45-degree angle to allow the pets to enter easily. It is also essential to place some wood shavings in the box for the birds to use them as nest material. One should install a predator guard in the nest box to keep the eggs safe.

Feeding: They should be provided with a well-balanced waterfowl food available in various pet stores. One may occasionally feed them with dried dog foods for additional nutrition. Providing them with an all-purpose vitamin and mineral supplement for waterfowl helps to ensure their overall health. 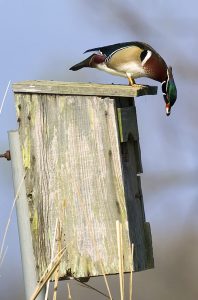 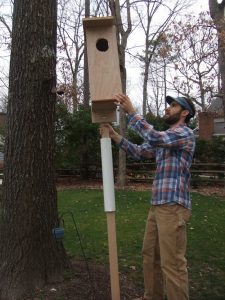 The species is included in the “Least Concern” category by the IUCN. However, loss of habitat, overhunting and deforestation may become a threat to their existence in the near future.

Find out some fun facts about the amazing birds:

One response to “Wood Duck”