Harlequin Duck is a small sea duck. They belong to the family of Anatidae, Ducks and Geese. It is also known as the sea mouse. The term Harlequin means a character in Italian comedies who wears a black mask and a brightly colored costume, similar to these ducks.

There are some alternative names of these elegant ducks.

Body : They are plump bodied.

Color : The color of the male’s wings, head, neck and back are bluish grey. The flanks are chestnut-red colored. A black strip runs along the top of its head which is bordered by a chestnut line. It ultimately fades to a white crescent around the front of its face. There are white markings, all edged with black on the wings, below the tail, behind the eye, side of the neck and around the base of the neck which forms a collar. The female has a dark grey brownish body and head with about 3 vague white facial markings similar to the males.

Weight : Males weigh around 1.44 pounds. The females weigh slightly lesser than the males. Their weight varies around 1.22 pounds.

Wingspan : Their wing span stretches up to 2 to 2.3 feet in breadth. 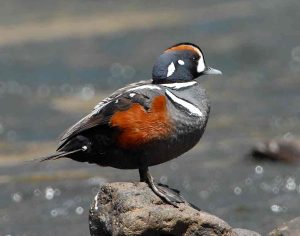 Harlequin ducks breed in Siberian region and in Mountain Rivers through Alaska and in the western provinces and states. They are also known to breed in Greenland, the eastern Arctic on Baffin Island, the Ungava peninsula. Globally, Harlequin Ducks are categorized into two distinct populations, a larger Pacific population and a comparatively smaller Atlantic population.

They are short distance migrants and mostly migrate during the winters near rocky shorelines on the Atlantic and Pacific coasts. They rarely migrate to Western Europe.

Harlequin Ducks are a bird of fast-moving water. They breed on fast-flowing watercourses and spend the winters along rocky coastlines in the crashing surf. It generally nests close to water bodies and builds its nest on the ground in a bundle of bushes. Occasionally they build nests in a rock crevice, tree hollow or old sea bird burrow.

Harlequin Diet feeds on crustaceans, insects, chitons, fish, mussels, shellfish, fish eggs, molluscs and marine invertebrates. Harlequin ducks feed in small groups near the shore, with the help of their bills around and under stones.

These medium sized birds have some exclusive behavioral forms.

When Harlequin Ducks are in the air, their flight is normally speedy and erratic. When they fly, their wings beat swiftly. They travel in packs. 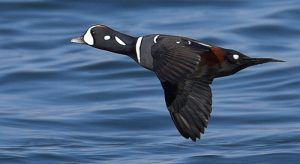 The Harlequin Duck is preyed upon by the arctic fox and gray wolf.

Harlequin Ducks have certain adaptive features which helps them survive in extreme temperatures.

The voice of Harlequin Duck is that of a shrill whistle. It bears a resemblance to the squeak of a mouse. They remain silent most of the times, occasionally squeaking.

Harlequin ducks begin to mate when they reach the age of two years. Very little is known about their courtship behavior, even though breeding usually begins in late May or early June.

Harlequin Ducks usually lay around three to nine eggs. The egg is pale creamy to pale buff in color. The eggs are incubated by the female, which hardly ever leaves the nest only to feed, wash or rest for twenty eight to thirty two days until they hatch. 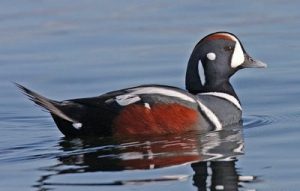 The nest is made up of dry plants that are set in a circular pattern to a height of 5 to 8 cm, and is decorated with fine grass. The male lives with the female during the incubation period and leaves to moult as well as feed in other areas. It reduces the number of ducks feeding in one particular area and it probably escalates survival rates.

The female Harlequin Duck raises the young one. The chicks hatch within a few hours of one another. The young ones are able to swim and feed on their own soon after they are hatched.

Nothing is known about their lifespan.

Harlequin Ducks are categorized as “Least Concern” by the IUCN.

Here are some amazing pictures of this glorious, graceful and gorgeous Duck species. 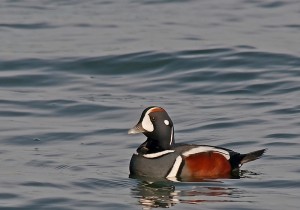 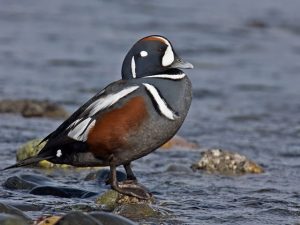 One response to “Harlequin Duck”