The Ring-necked Duck is a species of small to medium-sized diving duck characterized by the distinctive shape of its head, a sloping forehead, a peaked rear crown, and a gleaming black, gray, and white coloration. These are mostly vagrant birds that roam in groups from place to place and are known to be very strong and fast fliers.

Body Feather Color: The plumage color patterns between the sexes display distinct sexual dimorphism. The drake (male) exhibits a pronounced black-and-gray pattern with the head and back being black in color, while the sides are gray with a white hash mark on the chest. The hen (female) has a rich brown body with contrastingly pale cheeks.

Feet: The legs are dark gray in color, while the digits are joined by webs (webbed feet).

Eyes: Rounded, bright yellow eyes, with the females having a whitish eye ring. 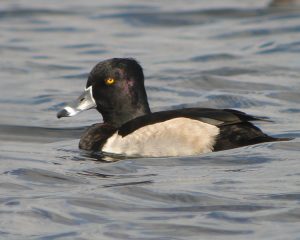 Bill: Flat and tightly-shut beaks. The males have a prominent white ring on the bill, while the females have a white patch near them.

The scaups lack the field marks of the ring-necked ducks. The former has white flanks and a gray back, whereas the latter has gray flanks and black back.

The maximum longevity of the ring-necked duck in the wild is 20.4 years.

The breeding habitat of the ring-necked ducks is wooded ponds and lakes within their range in the northern part of the United States and Canada, with the primary breeding area being the Northwest boreal forest territories, and the eastern boreal region of Canada.

During winter, they usually dwell in the beaver swamps, ponds, bogs, lakes, rivers, estuaries, and bays (except saltwater bays) in the southern part of North America.

No subspecies of this aquatic bird has yet been defined.

These aquatic birds forage by diving into the water. The ducks usually choose a site where the water is shallow, while they keep searching for food both on and under the water surface.

Unlike many other diving duck species, the ring-necked ducks are strong and fast birds that can directly take a flight from the water surface without taking a running start. They are frequently seen in small groups with even other duck species like the scaup, or with other dabbling ducks. 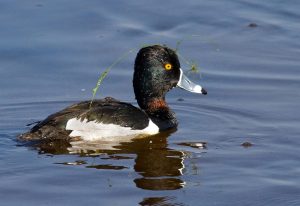 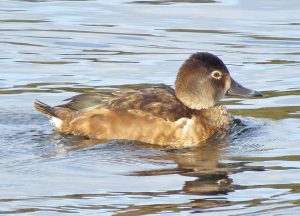 The vocalizations and communication techniques of these birds have not been studied in depth. The ‘kink-neck’ call of the male is emitted before mating, while a curious female duck gives out a soft purring growl. During danger, the hens also emit a high pitched growl, as well as a soft ‘cut-cut-cut’ noisy alarm call intended to warn the brood.

Ring-necked ducks are omnivorous. When the ducklings learn to forage, they search for insects, midges, snails, earthworms, leeches, or the like, while the diet list of the mature adults includes underwater plants including pondweed, coontail, as well as, annual wild rice and snails.

The ring-necked ducks form pairs for mating while migrating during springtime. They build their nests either on dry hummocks or on dense vegetation floating in the water. The hen (female) alone makes the nest and finishes it before beginning the incubation.

The mother duck typically lays 8-10 eggs at a time. The incubation period lasts for 25 to 29 days. The bond between the father and the mother ducks remains until the latter begins to incubate.

Within 12 to 24 hours from the time the young ring-necked ducklings hatch out, they learn to feed themselves, while the mother tends the juvenile ducks and keep brooding them after sunset for some time. The process, however, continues in the marshes, where the hen can hide the chicks easily and never bring them into open water as many other diver species do.

The mother continues living with them until the ducklings are around 49 to 55 days old, and gradually learn to fly. However, at times, the female might also leave the young ones even before they fledge. 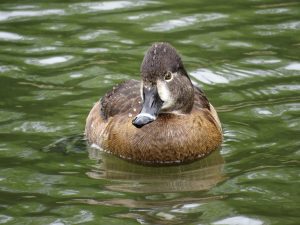 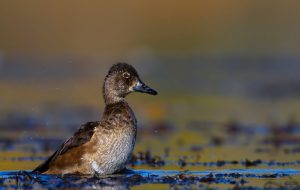 Also, larger species like the common loon, the red-necked grebe, and even the much smaller pied-billed grebe frequently attack these ducks.

Because of their stable (and growing) population, the IUCN 3.1 has enlisted them under their ‘LC’ (Least Concern) category. 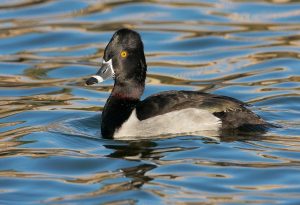 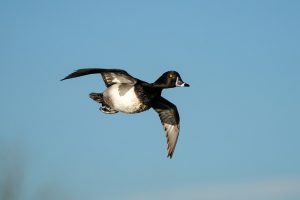