The American Mink is the cutest member of the weasel family. The name mink has been derived from a Swedish word ‘meank’. They are native to North America. Since they come from a weasel family they are akin to many weasels with similar physique. They are usually harvested for their furs which are of excellent quality and color.

The American Mink have a long slender body which is around 12-22 inches (30-55 cm) long. They have short webbed legs which make them an excellent swimmer. The little minks have a long tail and its tail itself comprises of one-third of its body. It has thick glossy hair usually brown to black in color throughout its body and a patch of white under the chin and throat. The soft furs of the minks are covered with waterproof oily hair.

Naming of the American Mink

The minks originated in North America, and American Minks are found throughout the United States and Canada except for few places on the tundra and southwestern USA like Arizona, Hawaii, Southern New Mexico, southern and central Utah, western Texas and southern California. 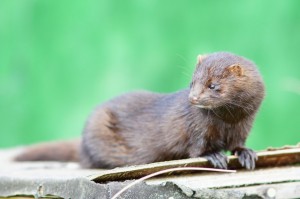 The American mink is a semi aquatic animal and it spends a lot of time inside water hunting for preys. They are nocturnal animals however are active throughout the year. The mink are solitary animals that mark and recognize their territories with the smell. They are carnivorous animal and hunt preys bigger than themselves. The minks usually live alone and are with their partner only during breeding seasons. When the minks are threatened they usually snarl and hiss and release a scent that also advertises its territory with the other minks and they purr like a cat when they are happy.

The minks are semi aquatic animals and hence are found in wetland environment, usually near the streams, rivers or any other water bodies. The mink population at a particular area depends on the food available for them at that area. The minks move in to the huts and burrows of the muskrats and other occupants if they are empty or just hunt down the occupants. The minks also live in the cavities made by the stream or the trees.

The average life span of a wild mink would be a year to 3 years. This statistics however comprises of the younger minks that easily fall prey to the predators or die of disease or starvation. Once they reach the adulthood and are capable enough to hunt their food, they may live up to four years to seven years. However the domestic minks may live for longer period.

American Minks mating season starts from February to April. The male and the female minks have several partners. The female gives birth by late April or early May. When the mating season starts, the male minks wander far away in search of females. It takes almost a month for the fertilization and implantation of the eggs, gestation period would be around 51 days. 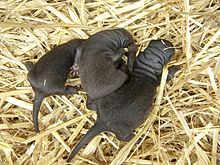 Minks are carnivorous animals. They are nocturnal animals and hunt mostly during night but are also active during the day. The American minks are aggressive predators and often hunt down animals bigger than themselves. They hunt variety of prey from aquatic animals to terrestrial habitat. Since they are good swimmers, they dive and catch fishes and feed on muskrats, rabbits, frogs, chipmunks and snakes etc. They kill their prey by biting them on their throat.

The American Mink have a bounding gait and can swim and climb trees. They can swim for up to three hours in warm water but cannot sustain cold water for very long.

The eyesight of the mink is better on land than in water. They rely heavily on their auditory glands when hunting for preys. However they have comparatively weak sense of smell.

The American Mink fur is more glossy and silky than of its cousin, the European Mink. Their fur color varies from brown to black and a patch of white below the chin and throat. The soft fur is covered by the oily hair which is waterproof. The furs of American Mink are very attractive due to its superior quality and color.

The minks molt twice in a year, once in April and then in August or September. 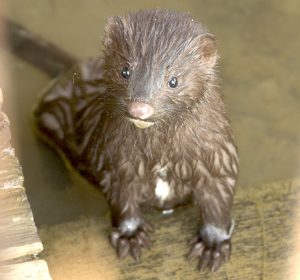 The American Mink fur has a superior quality and color due to which it is in great demand in manufacturing coats, caps and jackets.

American mink were in great demand for its superior quality fur and hence harvesting the wild minks became insufficient. Therefore in the late 19th century, they started breeding the American mink for its fur. By 2005 America became the fourth largest producer of American mink fur after Denmark, China and Netherlands. Once the minks give birth to their young once in May, they are harvested in November and December.

American Minks have been kept in farms for almost a century for breeding however they can also be tamed if caught young. They can dominate the cats and drive the rats away from the rat holes. The minks are intelligent animal but take a long time to be tamed.

Decline of the Wild Mink

The American minks can kill snakes as well but they do not eat them. 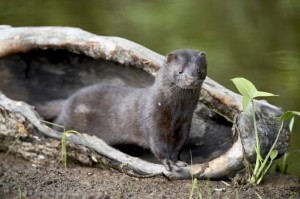 The American minks are listed as the least concerned category, they are found abundant in Northern United States and Canada except in tundra region and the southwestern USA.