North American River Otters is a member of the weasel family. It was one of the most widely distributed mammals in its native region of North America. In last few decades, their original range has decreased mainly due to habitat destruction and unregulated hunting. This species is also called Common otter and Northern River Otter.

Size and Weight : The size of their head and body (excluding the tail) is 20 – 32 inches and their tail is about 11 – 20 inches long. An adult can weigh around 7 – 12kgs. They have well webbed strong feet possessing strong claws. Their legs are short as compared to their overall body structure. They have a diamond shaped nose.

Fur : Like most other species of otters, their fur is also thick and velvety. The outer fur (guard hair) measures about 17 – 20 mm long in average and the under fur is 8 – 10 mm long. Their dense fur keeps their body warm.

Color : North American River Otter can be black, reddish, reddish or grayish brown. The color of their underside is lighter compared to their outer side. 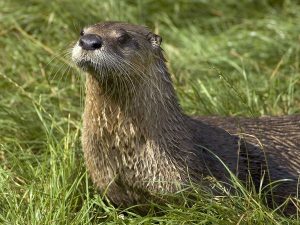 This species is endemic to North America. It is found in Canada and the United states except some regions of Texas, New Mexico and southern California. They are also found in Gulf of Mexico, Atlantic Ocean and Rio Grande in Mexico.

North American river otters prefer to live near slow moving water bodies, where there is plenty food supply. They can live in various kinds of environments and habitat like rivers, marshes, lakes, estuaries and swamps. They live in burrows and dens that generally have an underwater entrance.

River otter is a playful and intelligent diurnal creature, but prefers to hunt during evenings. They are generally a solitary species, but at times they can also be spotted with families around them. River otters are generally found within few hundred meters from the water body. Their ‘play’ activities help them to build social bonds and practice techniques of hunting as a group. They are known to take over the dens of muskrats and beavers. Their home ranges vary depending on the habitat and food quality with males having a larger range than females. This species spend most of their time searching for prey and playing near mud banks. They are a splendid diver and swimmer having the ability to remain underwater for up to 5 minutes. In land, they can run up to a speed of 29 km per hour.

This carnivorous species are opportunistic and frequent hunters. They primarily feed on small crustaceans and slow moving fishes. Their diet also includes snakes, insects, turtles, insects, small birds, crayfish, small reptiles and calms. They catch their prey both from land and underwater. 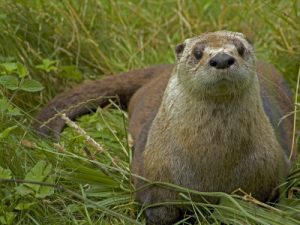 North American River Otters reach their sexual maturity at the age of two years. The breeding season starts from late winter and continues till early spring. A single male may breed with several females in a single season.

Their copulation, which lasts about 20 – 70 minutes, takes place both on land as well as in water. This process is interrupted by several rest periods. Gestation period lasts about 55 – 65 days. Young ones are generally born a year after mating because of the delayed implantation of their fertilized eggs in the uterus. Females give birth to a litter of 1 – 3 (rarely it may go up to 6) pups in other animal’s den in order to raise their offspring in suitable environment.

At the time of birth, pups are toothless; blind, fully furred weighing around 100 – 150 grams. It takes about forty days for them to open their eyes. They start taking in solid food within 2 – 3 months. This species is a natural swimmer. With the supervision of the female, the young are introduced to the water when they are two months old. Some North American River Otters prefer to shift their den after two months. They prefer to stay as a family, which include a male at times. When they are 6 months old; they leave their mother and start to look for their own range.

This species have few natural predators in water, where they are generally taken by alligators. In land, their predators include coyotes, mountain lion, domestic dog, red fox, black bear, birds of prey, bobcats, gray wolf and other large animals. 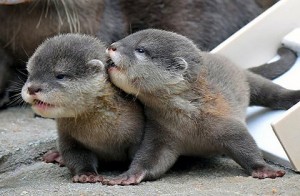 This species communicate through various kinds of sounds that include hisses, growls, chuckles, screams and whistles. They also use body signals to communicate.

Here are some interesting facts about this river otter-

They are considered as Least Concerned by the International Union for Conservation of Nature (IUCN), but this species is protected by the local government in few regions.

Here are some pictures of North American River Otter: 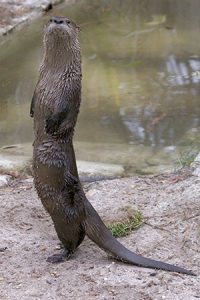 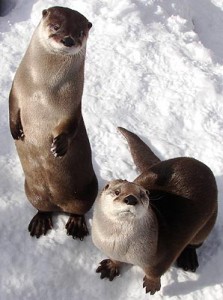