North American Porcupines are large rodents, belonging to the New World porcupine family. These animals are also known as the Common Porcupines or the Canadian Porcupines. They are mainly found in mixed forested areas of North America and Canada. These rodents usually live in trees.

Body: They have a stocky appearance with the entire dorsal side being covered in sharp and hollow quills or spines.

Size: The head-and-body length (excluding the tail) may range from 25.4 inches to 41 inches.

Color: These Porcupines can be black or dark brown. Usually their body has a white highlighting.

Head: They have a small head with small eyes and ears. The back of their head is covered in hard spines. The small face is of a darker color.

Legs: The legs of these animals are quite short. The hind foot is somewhere between 3 to 3.6 inches (7.5 to 9.1 cm) in length. Like all other rodents, the North American Porcupines have four fingers on their front feet and five on the hind feet.

During an oceanic dispersal or “rafting event” 30 million years ago, the ancestors of these Caviomorph Rodents were dislocated from Africa to Brazil. They shifted to North America during the Great American Interchange three million years ago. 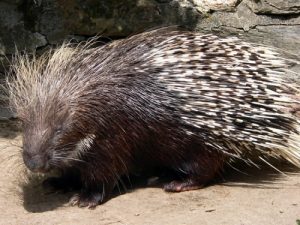 The North American Porcupines are mainly found in major parts of western and northern United States and also in mixed and coniferous forests of Alaska and Canada. Smaller populations are found in some regions of Virginia and northern Mexico.

These rodents prefer bushy shrub lands and woodlands. They can also be found in desert and tundra regions. They generally live in holes of tree trunks.

The feeding habits of these herbivorous animals vary from summer to winter. They feed on berries, twigs, roots, stems and other vegetations during summer. In winter, they eat tree barks and conifer needles.

These solitary animals have a strong defense system and an interesting behavioral pattern.

The North American Porcupines are not as common an object of predation as other rodents. The common predators of this species include mountain lions, fishers, wolverines and coyotes.

This species have some useful adaptive features and self-defense mechanisms that enable them to survive in their environment. 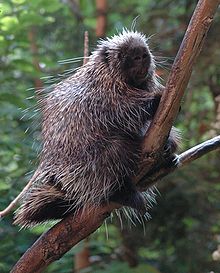 The season of reproduction starts in late summer and continues through early periods of fall. These creatures call to attract mates during reproductive seasons. Sometimes, the males fight over a female. The females give birth to a single young porcupine after seven months of mating.

The young ones are born with soft quills which take a few hours to harden. They start hunting for food after two days. The young North American Porcupine stays with its mother for approximately six months.

The average lifespan of this species is 5 to 8 years. However, they have been recorded to have lived for more than 10 years in captivity.

This species is considered to be fairly risk-free and a pet law has been passed recently to allow people to keep them as pets. Here is some information about their housing and diet in captivity.

Housing: Like all New World porcupines, these animals are arboreal, spending most of their time on trees. So, the cage should encompass more vertical than horizontal space with proper protection from direct sunlight. A 5’×5’×8’ (200 cu ft) cage is ideal for a single animal. The enclosure should be increased by 20% to keep an additional Porcupine in it.

Temperature: They can survive in temperatures ranging from 90°F to below freezing when provided with proper shelter.

Lighting: These porcupines are naturally nocturnal. So, one may keep them in a reverse light cycle with 12-14 hours of day and 10-12 hours of night.

Diet: They should be kept on a well balanced diet that resembles their natural feeding habits. One can feed them with fruits, berries, leaves, twigs etc.

Handling: The sharp quills of these creatures can cause painful injuries if they pierce the skin. So, one should keep a safe distance from these quills. It is advisable to consult a doctor immediately in case these quills are stuck in skin.

This species is categorized as “Least Concern” by the IUCN. It means there are no immediate threats to the existence of these Porcupines.

Here are some images of these creatures. 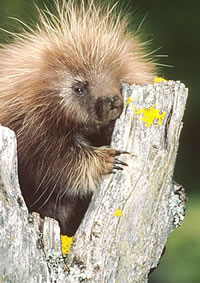 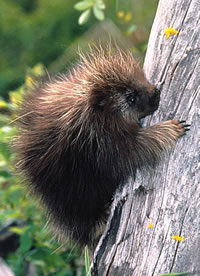 The North American Porcupines are one of the most interesting species of rodents in the world. With the barbed spines as their most unique feature, they have interested humans from the very beginning.