The Giant Otter is a species of large-size endangered otters from South America. At around 6 feet in length, this animal is the world’s largest species of otters. It is a member of the Mustelid family that also includes weasels, skunks, and ferrets, all of which have strong scent glands. This is the most recognizable otter by size, except the sea otter that weighs somewhat more than this species.

The existence of the entire species of the giant otters has also been threatened by damming, logging, mining, and overfishing, and eventually resulting in widespread degradation of their native habitats. 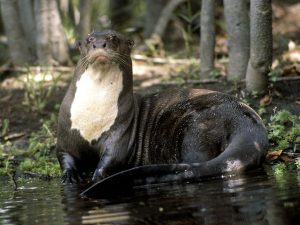 Fur/hair/coat: Extremely soft, chocolate brown fur that is uniformly distributed all over the body. There are also large creamy-white patches under the long necks of the otters.

Eyes: Brownish almond-shaped eyes like most of the other species of otters.

Tail: The tail is very strong, ventrally flattened and is wing-like.

Feet: The feet of these creatures are webbed, very much like most of the other members of the otter family.

The life expectancy of the giant otter usually is around 12 years in the wild. In a zoo setup, or in captivity, they can live for up to 21 years. 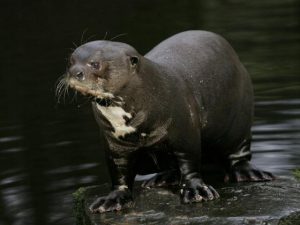 The giant otters are naturally endemic to South America (except Chile). They are widely spread across the east of the Andes mountain chain. These mammals are seen on Amazon, Orinoco, and the river systems of La Plata. However, at present, they have practically (or entirely) disappeared from Uruguay and Argentina, and exceptionally rare in Paraguay, the regions where they were common in the past.

Habitat: Where do Giant Otters live

This otter species is mostly found in slow-moving streams and rivers, in the swamps, marshes, and lakes. They also inhabit the flooded forests, especially during the monsoon rains. They prefer non-floodable banks with ample amount of natural vegetation that gives them easy access to hunting since such areas have sufficient amount of preys in the relatively shallow waters. 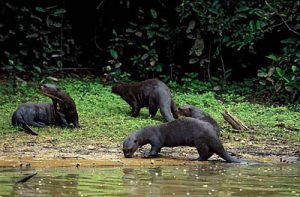 Two know subspecies of the giant otter has been isolated:

Out of the four members of the ‘Lontra’ genus of otters, the Giant Otters share its habitat with three, in its South American home ground, namely, the ‘marine otter’ (or the sea otter), the ‘southern river otter’, and the ‘neotropical river otter’. However, in spite of the overlap of habitat, researchers opine that the Giant Otters have evolved independently from the sea and the river otters in the continent of South America.

In this context, it must also be mentioned that, the giant river otter fossils have been found in Midwest US, which dates back to 3.5 million years. However, the fossils of the modern-day river otters, that have been discovered, is evident of the fact that, the latter didn’t appear before 1.9 million years.

The Giant Otters are gregarious and live in groups of 3-10 individuals known as holts. These large otters are extremely social animals. Each of these holts lives within their own territory. The territories would never coincide or overlap with territories that belong to the other groups. They live in family groups that include otters of all types and ages including females, males, parents and their babies, or other young otters. The siblings that are older would even ‘babysit’ the other young cubs while the rest of the family is out for hunting.

The members of a holt would play, travel, rest, sleep and fish together. Both the females and the males would scent-mark their territories since all members of the otter family have strong scent glands. These members would often use communal latrines where they would smudge their urines and feces into the earth with their paws for advertising their area or territory.

These otters are diurnal, which means, they are active during daytime. While marking their territory, they usually clean up the areas by clearing the shrubs and plants along the river banks and lakesides, where they would sit resting, basking, and grooming themselves. They catch prey mainly in the waters and would immediately start eating after the prey is caught. While eating, they hold the prey with the paws of the forelimbs. 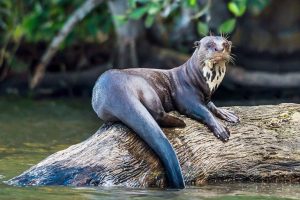 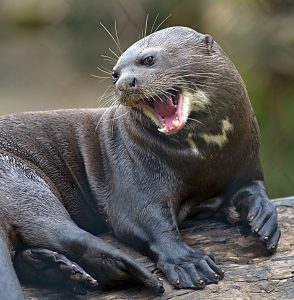 The Giant otters are noisy creatures with a complex repertory of vocalizations. Till now, nine distinct sounds have been identified including quick barks like ‘Hah’. They emit snorts when in danger. It also suggests something related to its immediate interest. Soft growls are signals of warning or forthcoming aggression. Newborn pups emit squeaks to gain attention, while the older otters would wail and whine during group activities.

Diet: What Do Giant Otters Eat

As one of the largest predators in the region, these animals have a large choice of foods in their diet list consisting of a wide variety of animals to feed on. This mainly consists of fishes like characins like piranhas, as also all types of catfish, but also crabs, small caiman alligators, and snakes, including anaconda. 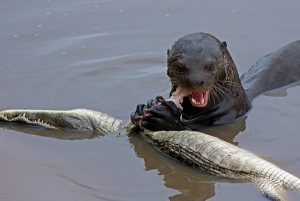 These mammals are monogamous. Unlike most other species of otters, amongst the giant otters that live in the wild, the breeding pairs make strong bonds between each other. Interestingly, the fairer sex dominates the pair. Each family is made of one single breeding pair while their older offspring would help their parents bring up their younger siblings.

The young giant otters are born between August and October after their mother completes the gestation period of 65-72 days. The litter size of these large otters is anything between 1 and 5. In each of the groups, only one female otter, the dominant female, gives birth to the young ones, which the entire holt helps taking care of, and not just the father. 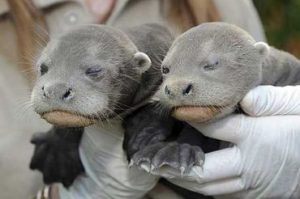 After birth, the juveniles spend the initial two months with their mother inside the den. As the adult otters move out in search of food, the older brothers and sisters take care of their younger siblings. However, when there is a necessity to change dens, the mature otters would carry the babies by the neck fur.

As they gradually develop, the otter babies would set out with the adults to learn to travel out of their dwelling caves and even learn to hunt by participating with the adults in the act of hunting. The babies mostly feast upon fishes, as also depend on their mother’s milk until they attain the age of around five months. The otters are capable of mating and reproduction when they are about 2 to 3 years old. It is then that they finally leave the group in search of a mate and an unoccupied territory, which are indeed tough to find. If these new otters find a mate and a place to establish a territory, they will make their own holt, but if they would fail, they would often return back to their old group. 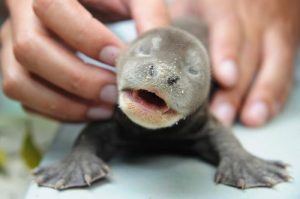 Though there is not much-recorded evidence about the natural predation of giant otters, experts have suggested that cougars, jaguars, and anacondas can pose a threat to these creatures. However, young pups are more susceptible to such threats. Though, at times, fishes like electric eels, groups of piranhas and stingrays can also prove to be fatal.

The Giant Otter is threatened, and the IUCN 3.1 has officially categorized them under the ‘EN’ (Endangered) species list. 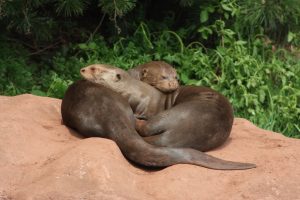 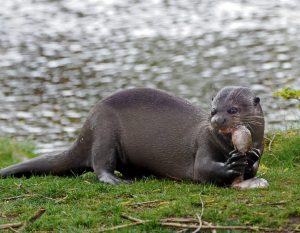 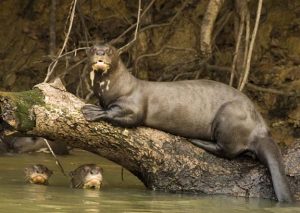