Mottled ducks, also known as mottled mallard, Florida mottled duck and Florida mallard, is a medium-sized waterfowl found in the Southeastern United States and Mexico. It is one of the most widely banded birds in that region. The males of this species are called mottled drakes, and the females mottled hens. 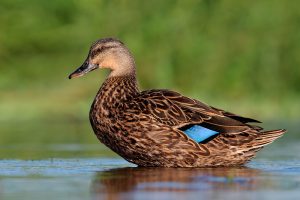 Plumage: Buff colored, the speculum is shiny blue, yellow bills in males, pale orange in females, and male tails have a faint pattern which the tails of females lack. Dorsal and ventral sides are brownish-black and ventral side has a smoke-gray U-shaped stripe.

Sexual Dimorphism: Apart from the dimorphisms mentioned above, males are larger than females.

Mottled ducks can be found in abundance in Louisiana, Texas, and Florida. Smaller populations thrive around the Gulf of Mexico, Alabama, and Mississippi, as well as Veracruz in Mexico which has the lowest number of ducks residing. 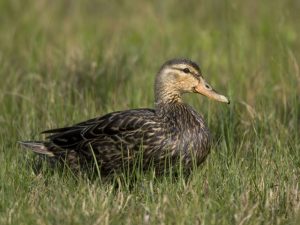 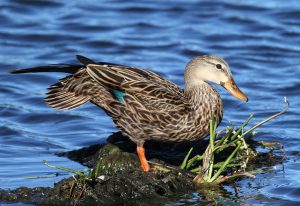 Mottled ducks form monogamous pairs, but only for a particular breeding season, with pairings changing every year. Pairs are formed around March and go up to November, which finally ends with the ducks going their separate ways after the egg-hatching procedure ends. Nests are built on the ground within vegetation like marsh grass, which forms the nesting habitat.

Breeding occurs once a year during January, after which 5-13 eggs are laid and incubated for 24-28 days.

The ducklings fledge after 45-56 days subsequently becoming independent after 65-70 days. Both sexes become sexually mature after one year. 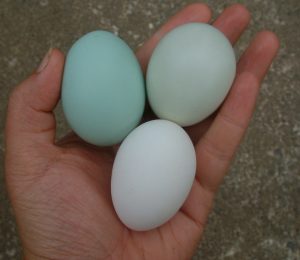 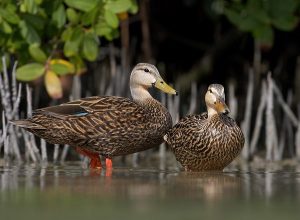 They may survive in the wild for about 5 years, and in captivity for up to 20 years.

Mottled ducks communicate with each other through audiovisual means. They use a raspy ‘raeb raeb’ call, made in a variety of notes, pitches, and numbers, to signify alarm, courtship, and aggression. A frightened female has been known to make up to four quick quacks, whereas they use a note best described as ‘gagg’ to attract drakes. 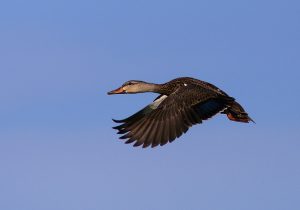 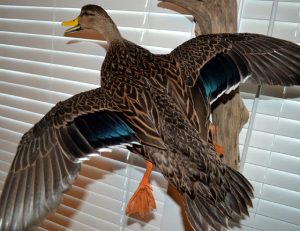 Most mottled ducks just fly away to escape predation. Vulnerable are the ducklings, molting adults, and nesting females to predators like red foxes, gray foxes, American minks, striped skunks, raccoons, river otters, ground squirrels. Birds of prey have also been known to prey on them, as indeed have alligators, snapping turtles, bass, and bullfrogs.

The IUCN Red List has listed the mottled duck under the ‘Least Concern’ category. 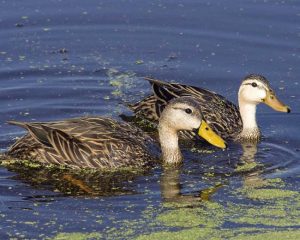 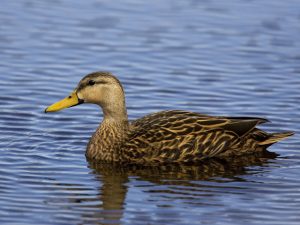 One of the fundamental differences between the similar looking female wild duck, or hen mallard, and mottled duck is the fact that the latter’s head and neck are lightly colored than the body feathers, while mallards do not have this pattern.