Muscovy Ducks are a wild tropical duck species native to Mexico as well as Central and South Americas. They were domesticated by the natives in these areas a long time ago. The ducks later established themselves in various parts of North America including the United States. They are often bred as domestic ducks in different regions of their distribution range. Other names of the species include Greater Wood Duck and Forest Duck. 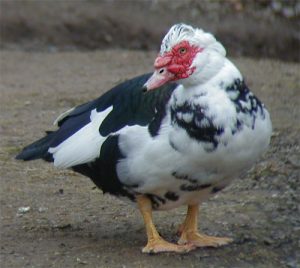 There are two subspecies of this species:

Several domestic varieties of the ducks have been bred from these two subspecies. These include:

They have an interesting appearance with certain characteristic features differentiating the male and the female ducks.

Color: The wild Muscovy species is blackish in color with distinct white patches on the wing. The face is dark red or blackish with yellowish brown eyes and a black bill marked with pale pink spots. The legs and feet are black in color. The juvenile bird has a duller coloration with or without the white markings on the wings. The domesticated breeds often vary in coloration from one another. Most are black and white or dark brown in color, especially around the head and neck. Other colors including pale white and lavender are also found. Both the male and the female have red or red-black face.

Head: The wild drakes have a short crest on their napes. The domestic males have a dark red or blackish knob at the base of their bills while the females have feathered face. The prominent knob on the head is absent in females which is one of the main differences between males and females. 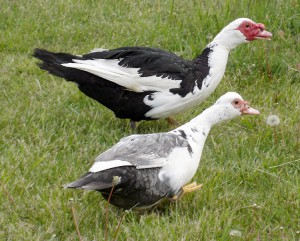 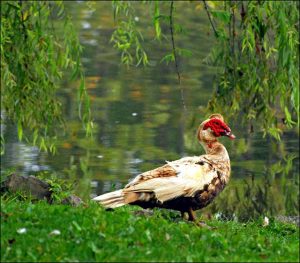 The wild birds are found in certain regions of Southern Florida, the lower Rio Grande River Valley in Texas and southern Canada. Their distribution range extends from the western parts of Andes to Ecuador in south and the eastern Andes to the northern parts of Argentina and Uruguay. The feral populations have also established in some European countries as well as New Zealand.

Most populations are non-migratory or irregular migrants without any established migration patterns. The birds may migrate to avoid dry weathers with fluctuating water conditions. 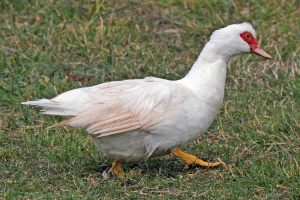 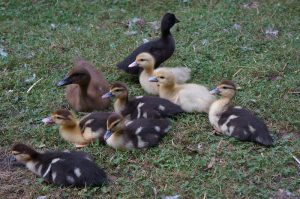 Domestic ducks are often preyed on by various carnivorous mammals like dogs, foxes, raccoons, opossums, minks and skunks. Other predators include various birds of prey such as herons and owls as well as large reptiles.

It has certain adaptive features to survive in its wild habitat: 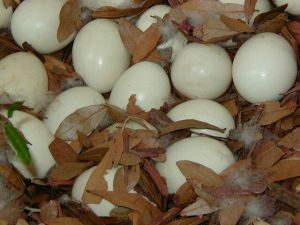 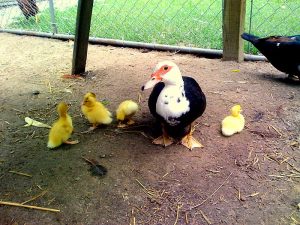 Mating begins in early August and continues through May with the exact breeding season varying depending on the range and population.

They become sexually mature at one year of age. Unlike many other duck species, the drakes do not take part in any dancing rituals to impress the hens. They often fight with each other to earn the right to mate with a female. Mating can take place either on land or in water. This species can breed up to 3 times each year. One male may mate with many females.

After mating, the female Muscovy Duck builds her nest in tree cavities near a water body. She lays 10 to 16 eggs in the nest and remains there to take care of them. The incubation period continues for about 35 day, during which period, the hen leaves the nest only once every day to find foods. The female is known to chirp while laying the eggs so that the ducklings imprint to her. 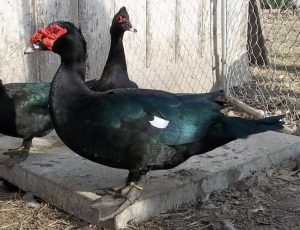 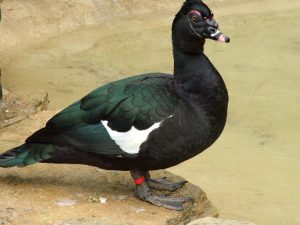 Their average lifespan ranges between 8 years and 12 years in wild. They may have a longer life expectancy of around 20 years in captivity.

Both the wild and domestic species are usually silent and are rarely heard calling or making any sounds unless they are attacked. The hens make a soft trilling coo while the drakes have a low and hushed breathy call. The males can also make puffing and hissing sounds to ward off enemies. 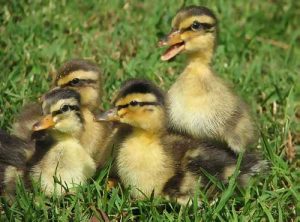 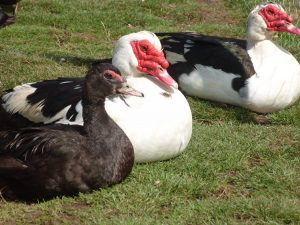 Muscovy Ducks can make good pets because of their peaceful temperament. Like all other domestic ducks, they need water to survive. Make sure to house them in a large water body such as a pond or a lake with plenty of trees growing around it. The trees should be large enough to have cavities in the trunks to allow the ducks to build their nest. It is also essential place a few nesting boxes so that they can nest in them in case there are no tree cavities available.

They do not like to be handled by humans and can find their own food. One can provide them with all-purpose vitamin and mineral supplements for ensuring their overall health. But, it is advisable to consult an expert before using any supplements to make sure they are safe for the birds. These birds are much less prone to diseases compared to other duck species.

Here are some fun facts about these birds: 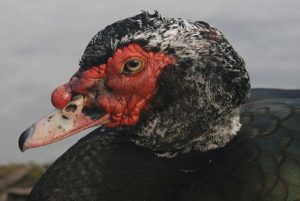 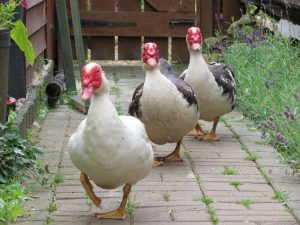