The Common Snapping Turtle is a fairly large turtle found in a water habitats including stagnate ponds and slow moving rivers. Popular for their aggressive disposition, these reptiles are contradictorily shy under water and rarely harm humans as long as they are not provoked. 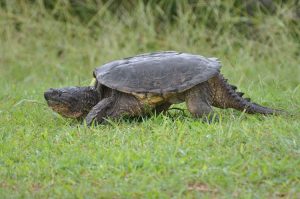 Common snappers can easily be identified by their beak – like jaws and flexible head and neck. Don’t be surprised if they hiss if you threaten or disturb them! Though they do not quite entirely fit as ideal pets, these snappers are quite interesting to study.

Weight: These turtles can weigh up to 10 – 35 pounds on reaching adulthood.

Carapace (Upper shell): These turtles have a dark and ridged carapace. These ridges are more distinct among younger individuals.

It is mostly brown, green or black in color. In some cases, the carapace is covered by moss.

Plastron (Bottom Shell): The bottom shell is quite small in size, leaving most of the parts exposed.

Tail: This species of turtles have a long tail, generally covered with bony plates.

Head: Common snapping turtle has a large head that is supported by a very flexible neck. It is also known to have a very strong jaw and a hard beak. The beak has rough cutting edges that enable the turtle to tear its prey.

The common snapping turtle almost entirely inhabits aquatic habitats; they visit the land only during the breeding season or when they have to lay eggs or reach a new habitat.

These turtles are mostly found in streams, shallow ponds or shallow lakes. However, some are also known to dwell in brackish water environments like those of the estuaries.

At times, these turtles can be spotted basking wherein they float on the water surface with the exposed part of their carapace. These creatures love to lie in the soft muddy or sandy bottoms of shallow waters occasionally exposing their heads out on the surface to take a breath. 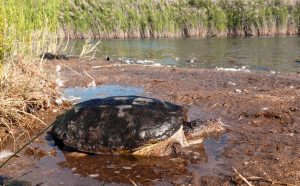 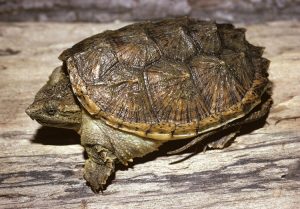 Their range extends from eastern United States to the Rocky Mountains and further from southern Canada to the Gulf of Mexico, right into Central America.

The common snapping turtle is one of the only two turtle species of this family to be found in North America.

Their omnivorous diet includes both plants and animals. However plant matter comprise of only one-third of their diet. These turtles feed on spiders, insects, worms, frogs, fishes, snakes, unwary birds and even small mammals. It is not rare for this species to feed on carrion or the dead, rotting body of animals.

It is noteworthy that the sexual maturity of these turtles is determined by the size and not the age. Generally, snapping turtles are ready to mate by the time their carapace measures 8 inches in length.

The mating season lasts from April to November. The female is capable of preserving or holding the sperm for many seasons, thereby using it whenever necessary.

These female turtles travel extensively over great distances in search of sandy soil habitat to nest and lay their eggs; this nesting site is often at a few miles distance from water. Female snapping turtle builds the nest by digging a hole in the ground with its strong hind legs. A single clutch would contain around 25 – 80 eggs in a year. These eggs are covered with sand for both incubation and protection. The incubation period may last from 9 to 18 weeks, depending on the temperature.

Hatchlings dig out of the nest and are guided to the water by their sheer instinct. However, on the course of this journey from their nest to water these hatchlings are often preyed by raccoons, foxes, snakes, birds and dogs. The ones that can make it to the water live and mature into adults. 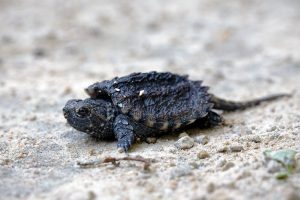 Here are some very interesting facts about the common snapping turtle.

Common snapping turtles have quite a reputation for their ‘fierce’ or furious dispositions. It tends to make a hissing sound when threatened or encountered; however, in water as long as they are not provoked, they usually remain docile and seldom harm humans.

These turtles are nocturnal animals that are mostly active at night.

Snapping is a sort of defense mechanism that these turtles have developed, since their huge body does not allow them to hide under their shells.

The common snapper’s style of preying is also noteworthy; it captures its prey with its beak-like jaws.

A chief adaptation of the common snapping turtle is its long and flexible neck. These animals can stretch their necks almost over halfway of the back of its shell and snap its prey with its strong jaws.

The beak –like jaws with sharp cutting edges enable it to tear its prey easily.

It is noteworthy how its nostrils are located high above the snout. An excellent adaptation that allows the turtle to breathe even when it is halfway submerged in water.

These turtles can tolerate temperatures from 49 – 100 degrees Fahrenheit. Common snappers are not able to retain their body moisture as in the case of other turtles. 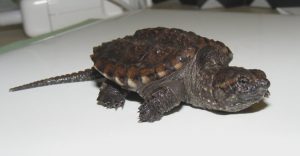 If you are thinking of keeping the common snapping turtle as a pet, think twice! As cute as they appear to look when young, they can get equally difficult to handle as they grow, owing to their aggressive nature. So come to think of it, the common snappers are not suitable for the definition of an ideal pet.

The flexibility of its neck allows these turtles to bite its handler even when picked by the sides of its shells. Moreover, its jaws are so powerful that it can easily amputate the handler’s finger!

Furthermore, those who furnish the idea that these turtles can be safely picked by the tail are absolutely wrong. Picking them by their tail not only injures the poor animal’s tail but also its vertebral column.

One handling the turtle with hands must also note that these animals also have sharp claws that can cause serious wounds.

If confronted with a scenario wherein one will have to rescue the common snapping turtle, it is always recommended to use a stick, allowing it to bite on it and drag it to a safer spot.

Those who are still interested in keeping these turtles as pets will find these instructions extremely handy.

Habitat: The tank, tub or pond should be large and deep enough so that these turtles can occasionally stretch their necks out to breathe.

Full spectrum lighting along with a heat light is absolutely necessary. Please note that your new pet friends are excellent climbers; as such it is important to make arrangements for a secure top to their cage.

Diet: Your pets will love to be fed with all kinds of cooked lean meat of chicken, fish or turkey. One can also feed them with invertebrates like earthworms or adult mice.

Common predators of their nest include raccoons, birds, dogs, skunks and crows. In the waters, these turtles have the threat of being eaten by sharks. Humans also hunt these turtles for their meat and eggs.

The average lifespan of common snapping turtles is roughly around 30 years in the wild. However some have made it for up to 47 years in captivity.

The common snapping turtle is not an endangered species.

Take a look at some pictures of the common snapping turtle. 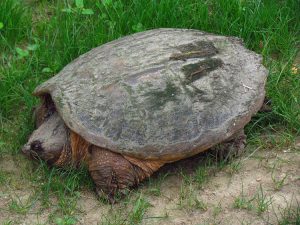 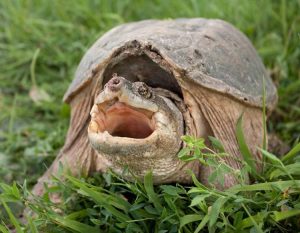