Red-shouldered hawk is renowned as the most vocal amongst all American hawks. This extremely vocal bird is almost an apex predator. Some species of birds do prey on other birds’ eggs. Sometimes eggs of red-shouldered hawks are also being preyed of this bird.

Red-shouldered hawks are often confused with red-tailed hawks. Find the description and identify the bird rightly next time.

This species of hawks have some peculiar behavioral traits apart from the common ones like other hawks. Read below and find out all about their behavioral characteristic. 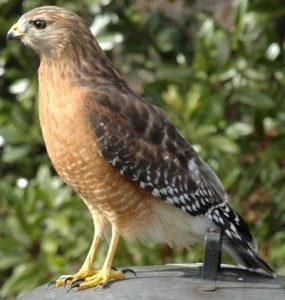 During courtship these birds screech in a monotonous “kee-yer” tone. Their scream could be heard from distance of miles. They also call out in a typical whistling sound. These birds have a reputation of being the most vocal ones amongst all types of American hawks.

The red-shouldered hawks are very fast flyers. They fly at a speed ranging between 18 MPH and 34 MPH.

Red-shouldered hawks are carnivorous. They are preying birds. They mainly feed on small mammals, voles, chipmunks, small reptiles, amphibians, small birds, bigger bugs, etc. These birds wait for their prey and as soon as they find the prey in suitable position they swoop down, catch them by their claws and fly away.

Red-shouldered hawks are widely distributed all over south-east of Canada, east of United States of America, central parts of Mexico and eastern Texas.

Red-shouldered hawks tend to nest high above the tree tops. They find their hubs in deciduous forests neighboring water bodies and other wetlands. They also inhabit deciduous-conifer mixed woodlands.

These birds start their spring season migration from February beginning and continue till first half of April. During this season they inhabit the eastern coastal regions and Great Lakes. The fall migration starts from middle of October and continues till middle of November. 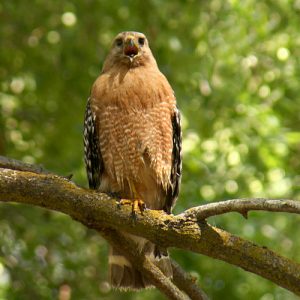 Most common migratory hub of the red-shouldered hawks are Appalachians, south of New England, south of Great Lakes zone, mid-Atlantic coastal areas, Marin Headlands and some of the races are marked towards further south.

Red-shouldered hawks have few predators. They come under almost the grade of apex predators.

The red-shouldered hawks mate from end of January till end of June. The peak mating season is throughout March till the beginning of April.

This species of hawks are monogamous creatures. They build their cup shaped nests with sticks, Spanish moss, dry leaves, feathers, lichens, etc. on a height of 20ft. to 60 ft. above the ground. Females of this species lay about 3 eggs each season, sometimes the number goes up to 6 also. The eggs are white in color with some brown-ish yellow blotches on them.

After a time span of 20 days to 33 days the hatchlings come out. The nascent born red-shouldered hawks are blind, weak and helpless. They leave their nests after a period 39 days to 45 days. But the hatchlings stay dependent on the parent hawks for food ad protection till 17 weeks to 19 weeks of age.

This species hawks are usually not petted. In case someone really wants to pet one of these birds is suggested to consult the state laws regarding petting this hawk. Experts’ suggestion is also advised to be followed about caring for them.

According to IUCN reports the red-shouldered hawks are Last Concerned. Their habitat conditions are absolutely safe and fine adaptive features have preserved the species’ existence intact on earth. It is unlikely to get endangered in recent future also.

There are five sub-species of this species of hawks.

These sub-species differ from each other in color and distribution range.

Read the key points about red-shouldered hawks which are the most interesting also about them.

Check out this amazing bird in the pictures below. 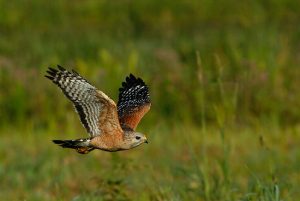 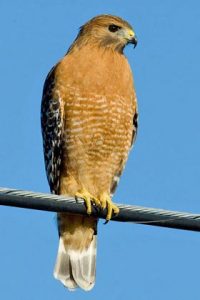 One response to “Red-shouldered Hawk”