The Hooded Merganser is a species of North American ducks that are abundantly found almost all over the continent. They represent the genus ‘Lophodytes’ as its only living member. These small, diurnal birds are characterized by a crested head (and hence the name ‘hooded’) that can be raised or lowered. A major sexual dimorphism can be noted in these creatures, with the male members being handsomely colorful, compared to the dull-colored females. 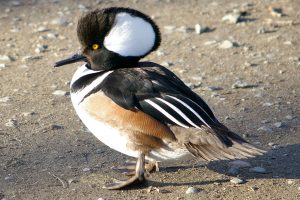 Weight: On an average, the males weigh around 1.6 lbs, with the females weighing a little less at 1.5.

Plumage/Feathers/Colors: The adult male has a white breast with chestnut-colored wings. They have a black back, and head with a large white patch on the face, which varies between individuals. Small white stripes begin from the middle back part of the body merging with its tail. The females and juveniles are brown and gray with cinnamon hues on the heads.

Feet: Their feet are webbed like most other species of ducks.

Eyes: Eyes of the males are small and round, and are amber to yellow in color, resembling beads. Females have brown eyes.

The average lifespan of the hooded merganser is 11-12 years in the wild. The lifespan in captivity is around 13.4 years. The oldest recorded age of a Hooded Merganser is 14 years, 6 months. However, one study has reported that they can live for up to 15.7 years. 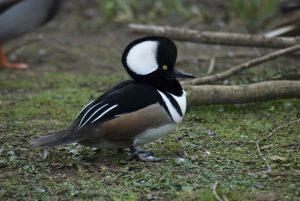 Native to North America, these ducks breed from the north of British Columbia to the Pacific Northwest, and central-eastern Canada to New England, the Ohio River Valley, and the Great Lakes. They winter down south to the Gulf Coast states and Baja.

Habitat: Where do Hooded Mergansers live

These mergansers prefer to live in the small forest pools, swamps, millponds, beaver ponds, wooded ponds, lakes, and rivers. They also winter in these areas, as also on inlets and coastal marshes. 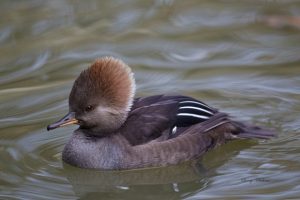 Depending upon the population’s range, Hooded Mergansers have been divided into the Eastern and the Western populations.

These merganser ducks are practically very solitary creatures, except during mating seasons, or for migrational reasons. They are quiet and secretive and are both good swimmers and fliers. They fly fast by shallow wing beats, and can fly at speeds of up to 50 mph.

While foraging, they submerge their heads under water while paddling their feet and keep looking around to search for their prey. They use their strong vision to locate their prey, and once found, they would aggressively dive underwater to pursue it. 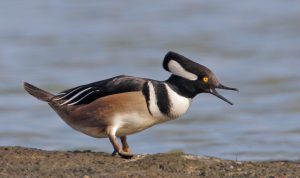 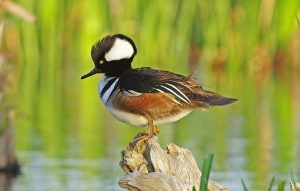 They have a low voice except during mating. They emit grunting or croaking sounds, uttering hoarse but low-pitch grunts and chatters. Displaying male gives rolling, frog-like “crrrroooo” that can be heard up to half a mile away.

Diet: What Do Hooded Mergansers Eat

Hooded Mergansers are mostly carnivorous with their diet usually being dominated by fishes. They also prey upon clams, mud crabs, crayfish, tadpoles, frogs, and aquatic insects and other crustaceans. However, they also consume some aquatic plants. 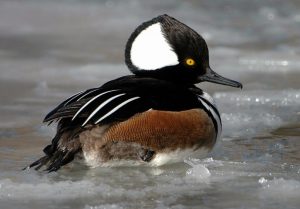 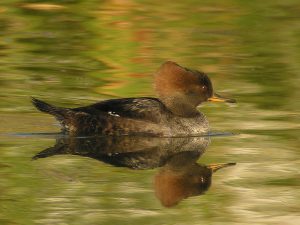 Hooded Mergansers reach sexual maturity in about 2 years. During breeding season, the male Hooded Merganser is in its full breeding colors. This is usually around the end of December. However, they wouldn’t nest until mid-February. 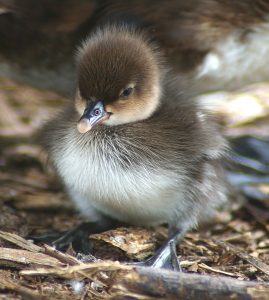 They are monogamous, and the male would display a variety of courtship rituals to the female in the water, where the act of mating happens. It would raise its fan-shaped crest, throw or bob its head to entice the female, while swimming next to the latter. The female might either reject the male, or might display acceptance by bobbing its head, or by flattening the tail on the water. After a successful mating, the male would swim around the female happily in a ritual display.

The females usually make their nests in woodlands in logs, stumps or inside the tree cavities. Matured females often return to its old nesting area where it brooded the previous year. However, not necessarily do they use the same nest to lay eggs. Their main competitors in the nesting sites are the Common Mergansers, the Wood Ducks, and the Common Goldeneyes.

Initially, they would line their nest with woodchips, leaves, and other debris, and finally by pulling downy feathers from their chests. It would lay 6-12 eggs in a cluster and takes about a month to hatch out. Once the female begins the incubation, the male would leave. 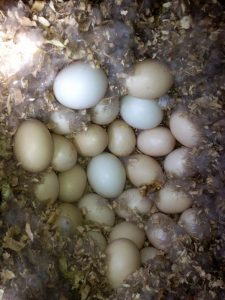 The ducklings leave the nest within 24 hours of their birth. Before bringing the babies out of the nest, the female would first investigate the surroundings and would then call the babies. The babies would jump down, often from nests as high as 20-50 feet, and can follow the female for up to 50 feet to reach the water, where they would easily find their foods. They take almost 70 days to learn to fly. 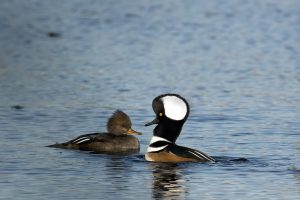 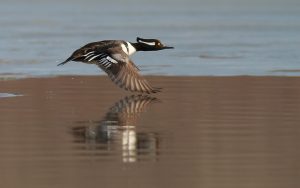 Predation mostly happens on the eggs and the ducklings. The predators commonly include bears, European starlings, Northern flickers, woodpeckers, raccoons, mink, and snakes.

The Hooded Merganser is not a threatened species. The IUCN 3.1 has categorized them under the ‘LC’ (Least Concern) species list. 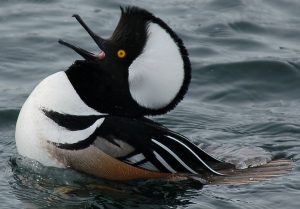 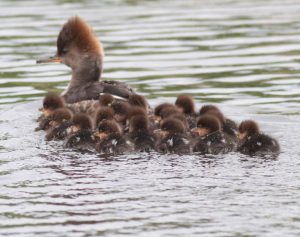