It is a usual sight to see the Blue winged Teal in the shallow ponds and marshes in several parts of North America. These small dabbling ducks have distinct blue spots on their forewing that explains the reason behind their common name. Blue winged teal are migratory birds that cover long distances heading towards South America for the winter.

The blue winged teal is basically a small dabbling duck with a somewhat round head and a large bill. Males and females are invariably different in appearance especially when it comes to their color pattern. The males are also slightly smaller than females. However both the sexes are attributed with a green speculum.

Blue winged teals are known to have two molts every year; a third molt is usually noted in their first year. During molting, these birds shed their old feathers that get replaced by new growth of feathers. 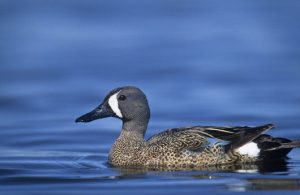 Weight: This duck weighs about 370 grams.

Legs: Both males and females have distinct yellow colored legs.

Wing coverts: Wing coverts of both the sexes are a brilliant sky blue that gets flaunted during flight.

Adult Male: The male can be distinguished by its slate gray head and neck; the portion of the crown is blackish in color. The black edged white crescent in front of the eyes is a prominent facial mark attributed to the adult male.

The color of the male’s body is more or less light brown with a distinct white patch towards the end. The breast of this bird has some dark speckling.

It has a black tail.

Adult female: The overall body of the female is speckled brown. The area towards the base of its bill is distinctly whitish.

The male’s call is more or less like a short whistle; while a soft quack is likely to the call of the female blue winged teal.

Blue winged teal mostly prefer to inhabit shoreline of calm water bodies like shallow ponds, pools, lakes and inland marshes. The dense emergent vegetation found in such ponds and lakes make this habitation all the more ideal foe these ducks. The prairie-pothole region with grassy habitats merged with wetlands is a popular breeding ground of these ducks. It is rare to spot them in areas near fast water.

These ducks are almost flightless by their late summer molt, during which they are mostly spotted residing in large marshes or prairie potholes.

They prefer to breed in salt-marsh meadows, especially the ones adjoining ponds and creeks. The blue winged teal is often spotted resting upon rocks jutting out of water, branches of fallen trees, trunks, muskrat houses, mud flats and bare stretches of shoreline.

The blue winged teal is found throughout North America with the exception of certain regions like western and northern Alaska, northern Northwest Territory, northern Yukon Territory and Northeastern Canada.

These ducks migrate southwards from their breeding range, during winters. Some of these birds cover long distances and may travel as far as Europe. These birds are observed wintering from southern California to southern and western Texas and further south to central and South America. It is not unusual to find these birds wintering to far south regions like Brazil and central Chile.

A major portion of its diet consists of vegetative matter that includes stems, seeds and leaves of grass, pondweed, duckweed, muskgrass etc. Blue winged teal also feed on aquatic insects including midge larvae, snails, crustaceans and clams. It is especially the laying females that feed on protein laden animal matter. 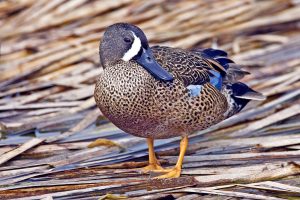 Seeds of rice, water lilies, millet and such types of plants growing on mud flats constitute a predominant part of their diet, during winters.

Courtship displays of the blue winged teal are noted to begin from late January or early February. The nesting period usually falls between mid April and mid May; in some cases nesting may occur by mid July. The nesting period may not always be constant every year. There are ample chances for the nesting period to be delayed due to unsuitable weather conditions.

It is the female that gets solely involved in nesting; it is also the female who chooses the nest site. The female scrapes the ground with her feet making a shallow, circular depression. This ground depression is further lined with dried grasses and down. The nest is typically in an area with dense vegetation and a foot above the water nearby; these nests are beautifully concealed by the vegetation from all sides.

Blue winged teal lays up to 10 to 12 eggs. The incubation period lasts for 21-27 days in approximate. It is during the incubation period that the drake or the adult duck moves out in search of a suitable molting cover leaving its mate behind; in the course of molting the male duck is flightless for about 2-3 weeks.

The new born ducklings are pretty active and can walk to water in just 12 hours after hatching. They are ready to fledge after a period of 6 to 7 weeks.

Blue winged teal feed by ‘dabbling’ whereby which they dip their bill into the water often drowning their entire head underwater in search of food.

These ducks are accustomed to feeding upon aquatic plants and certain aquatic insects.

The bonding between pairs eventually draws to an end during the incubation period. Thereafter which, these ducks form bonds with different mates. However males may court the same female once until she finds another mate.

Male courtship displays involve up and down pumping movements of the head, constantly dipping the head under water and dabbling in the water with raised feathers. The female responds to such displays by pointing her bill at the direction of the male and raising her head.

One of the most powerful adaptation of the blue winged teal is its’ bill. The bill is specially designed with a hard hook towards the rear portion that assists these ducks in acquiring food. Apart from this, the bill also has several bumps along the edge that functions as a strainer for food from the water. As such when this duck feeds, the food stays inside the mouth while the water gets released from the sides of the bill.

The feathers of these birds are carefully coated with oils that enable them to keep themselves warm and dry.

The eggs of the blue winged teal have the danger of being eaten by long-tailed weasels. In the prairies, these ducks often fall victims as prey to the red foxes.

Blue winged teal have an average lifespan of 12 years. The longest recorded lifespan associated with this duck has equaled 17 years.

These migrating birds are the first ones to appear in the south during fall; they are also the last to be spotted in the north during spring.

While migrating, some of these birds cover huge distances; at times they travel all the way from North America to Europe!

These dabbling ducks are quite sensitive to low temperatures; as such they fly south by the month of September.

The female blue winged teal is often confused with the cinnamon teal due to their similar appearance.

Blue winged teal rarely dive; they dive only when threatened or attacked by a predator!

The blue winged teal is not enlisted as an endangered species. In fact research has shows a considerable increase in the population of this species owing to the rise of favorable prairie habitats.

Here are some really nice pictures of the blue winged teal. 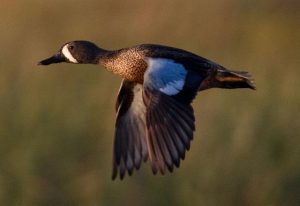 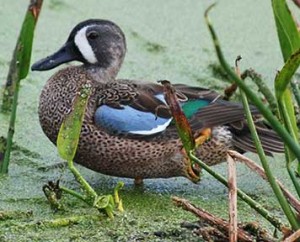 One response to “Blue Winged Teal”