Pickerel Frogs are the only native toxic frog species found in different regions of the United States. These medium sized frogs are often confused with another species called the Leopard Frogs. The Pickerel Frogs secrete a toxic substance from their skin which is poisonous enough to kill much larger animals.

These creatures are often confused with another frog species called the Northern Leopard Frogs. There are many similarities in the way the members of these two species look. However, there are some fine distinctions between their skin colors and textures. Here is a general description of the Pickerel Frogs.

Color: Their color may vary from dark green to greenish grey and olive. They have two cream colored ridges along the sides of their body. Dark rectangular marks arranged in two parallel rows cover the dorsal sides of their body. The female frogs are of a darker color than the males. These frogs have a bright orange coloration in their groin and underbelly area differentiating them from the Northern leopard Frogs.

Size: The pickerel Frogs are a medium sized frog species growing anywhere between 2 to 3 inches in length. Female frogs are larger in size.

Body: They usually have a skinny appearance with long legs and smooth skin. The dorsal sides of their body have a pale white coloration.

Head: Dark rectangular marks cover the back of their head. They have a white outline along their upper jaw. These frogs also have large bulging eyes. 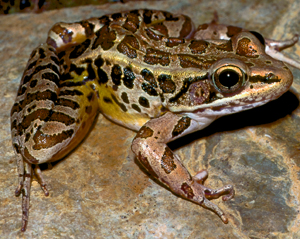 These frogs are natives to the United States. The western range of habitat of this species extends to places like Wisconsin, Eastern Iowa, Southeast regions of Minnesota and Eastern Texas. The southern habitation range includes Mississippi, Georgia, Alabama and Carolina. The northern range extends to the southern parts of Canada including Ontario, Nova Scotia and New Brunswick

These frogs are semi aquatic in nature preferring cool environments and clear water. They inhabit in grasslands or woodlands with enough vegetation for them to be able to take cover and an easy access to water. They can be found in places like streams, reservoirs and rocky ravines.

The adult frogs of this species usually feed on land. They eat a wide range of invertebrates and insects including caterpillars, spiders, snails and beetles. The tadpoles of this species are herbivorous feeding on algae and other water plants.

The behavior patterns of these frogs are quite similar to many other frog species.

Other frogs like the Bull Frogs and some snakes like Garter Snakes are immune to the toxic secretion of the Pickerel Frogs being capable to prey on them.

The green-brown color of these frogs helps them to hide in vegetations and grasslands to avoid predation. They secrete a toxic substance from their skin that can kill medium sized animals if they try to eat them.

This species become reproductively mature once they reach 2 years of age. Their reproductive season starts in April and continues through May. Reproduction takes place in water (aquatic). The male frogs call in a deep snoring voice to attract the females. 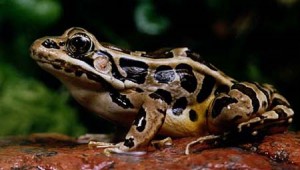 The female frogs lay eggs and attach them to underwater vegetations. The number of eggs in a single cluster may be anywhere between 2,000 and 3,000. The eggs are externally fertilized.

The Pickerel Frog eggs usually take somewhere between 11 and 21 days to hatch into tadpoles. The tadpoles start to metamorphose after three month of hatching. Their yellowish brown color turns into green or green-grey as they grow up. The juvenile frogs take 2 to 3 years to become matured.

These creatures have an average lifespan of 5-8 years.

The call of these frogs sounds like a low pitched snorting. Their voice is quite similar to that of the Northern Leopard frogs but is lower in volume.

The frogs of this species can secrete a kind of toxin from their skin. It helps them to avoid predation as most predators keep away from them because of this secretion. Even snakes avoid hunting this species. This poison can cause an irritation on human skin if comes to direct contact.

These frogs hibernate (remain inactive with lower metabolic rate and body temperature) during the coldest months of winter. The hibernation takes place at the bottom semi frozen lakes or in caves. Sometimes they dig burrows and bury themselves in it. The hibernation period comes to an end during early spring.

There are some important things to keep in mind to keep a Pickerel Frog as pet.

Housing: Usually, a ten gallon tank is suitable for one frog. As the members of this species are semi aquatic, the tank should contain both land and water. It would be ideal for 50% of the tank to contain water and the rest to be land. You can also put a piece of wood in the tank to provide a basking spot. Pickerel Frogs should never be kept with other frogs in the same tank as their toxic skin secretion kills any other species in a very short time.

Water Treatment: One should use de-chlorinated water for the tank. It is important to regularly change the water by 50%.

Feeding: One can feed them with different insects including crickets, worms and snails. Maintaining a variety in their food is very important. They will also eat fruits and vegetables in small amounts. They should be provided with a protein supplement once every week.

This species is included in the “Least Concern” category by the IUCN. It means there are no immediate threats to the existence of these frogs.

Here are some Pickerel Frog photos for you to find out about their appearance. 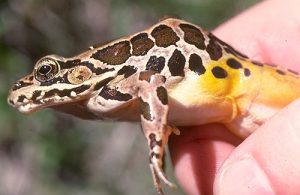 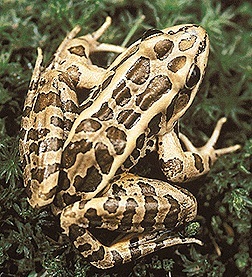 The Pickerel Frogs are an amazing species with an attractive appearance and interesting behavior patterns. They are quite popular as pets despite their toxic skin secretion.

One response to “Pickerel Frog”