Northern Leopard Frog is a medium sized leopard frog species belonging to the True Frog Family. They are mainly found in the United States and some parts of Canada. These green-brown frogs are very popular as pets in the US.

These frogs grow fairly large with a stocky appearance.

Size: They grow up to 11 cm (4.3 inches) in size. The female leopard frogs are bigger in size than the male ones. The tadpoles usually grow around 3.5 inches in length. 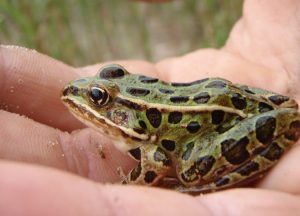 Color: The dorsal side is dark green or brown with the backs, sides and legs covered in dark spots of irregular shapes. These spots earned them the name “Leopard Frog”. They also have some cream colored stripes on their backs. The ventral side of these frogs is pale white. Juvenile frogs of this species usually have little or no spots on their backs while the tadpoles are spotted with golden dots.

Legs: They have a pair of webbed back legs.

These frogs are native to the northern parts of US and southern Canada. The range of distribution includes California, Nevada, Nebraska, Oregon, Arizona, Texas and Minnesota. Their western habitation range habitation extends to places like British Columbia, Alberta, Manitoba and western regions of Ontario.

These amphibians prefer grasslands with light vegetation while they also require access to clean water. These frogs can be found in streams, ponds, wet meadows and other wetlands.

These carnivorous frogs prey on various types of insects and animals including crickets, worms, fish, smaller frogs, mice and small birds. They have a large mouth which helps them to swallow animals and birds of almost their own size.

Following are some information about the behavior of the frogs of this species:

Various species of animals and birds including Herons, snakes, Bullfrogs, Skunks and hawks prey on these leopard frogs. The tadpoles are the prey of many fishes and water birds.

Their adaptations help them to survive in their environment:

The members of this species reproduce in water (aquatic reproduction). The breeding season starts in March and continues through July. The reproduction age for female frogs is 2-3 years while the males become reproductively mature at 1-2 years of age.

The egg masses float in the water or are attached to water plants. The eggs are externally fertilized. The number of eggs in a single cluster can be anywhere between 650 and 7,648. 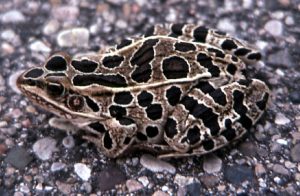 The Northern Leopard Frog eggs take 2 to 17 days (depending on the temperature) to hatch into tadpoles. The tadpoles usually complete the process of metamorphosis within 3 to 6 months. However, at one particular location the tadpoles were recorded to have completed their transformation within 50 days of hatching.

The average lifespan of these creatures is somewhere between 5 and 8 years.

The voice of these frogs sounds like a small motor boat engine. They mainly call during night and occasionally during daytime. They give a loud scream when frightened or captured.

The Northern Leopard Frogs hibernate with low body temperature and metabolic rate. The hibernation period begins from October or November and continues through March. They may bury themselves in muddy lands or swim to the bottom of semi-frozen lakes in order to hibernate. Hibernation may also take place in caves.

These creatures are quite popular and make lovely pets as they are fairly easy to take care of. Here are some important information about their care in captivity:

Housing: The width of their tank is more important than the height as Northern Leopard Frogs like to live in specious areas. A ten Gallon tank is adequate for one frog. It is ideal for half of the tank to contain water and the rest to be land. The terrestrial area should be at least 2- 3 inches deep to allow the frogs to burrow. A piece of wood can be placed in the tank to provide a good basking spot.

Water Treatment: It is necessary to use de-chlorinated water for these frogs. However, using water filter might be disturbing, as some experts say that the constant vibrations resulting from the filter can be a sensory overload for these amphibians. The water should be changed by 50% at least twice a week.

Temperature: They prefer room temperatures between 20 °C and 24°C during daytime; however, it is ideal to lower the temperature to 16°C during night.

Lighting: They do not have any special lighting requirements; however one may use UVA or UVB lights. The tank should be moderately lit as they tend to hide in bright light.

Feeding: One should feed them with a range of small insects including flies, beetles, crickets and worms. They will also eat fruits and vegetables occasionally. Variety of food is important for these leopard frogs. According to some experts, it is best to feed them only once every two days. One should also provide them with a vitamin supplement at least once every week.

Handling: It is not advisable to handle them unless absolutely necessary. It is important to wash the hands properly with soap after handling these frogs and the contents of their habitat.

Here are some interesting facts about this amazing species:

This species is listed in the “Least Concern” category by the IUCN. However, they are being considered as “Threatened” in some states of the US.

The Northern Leopard Frogs are one of the most interesting frog species found in the United States. They have created great curiosity in humans with their appearance and behaviors for a long time. 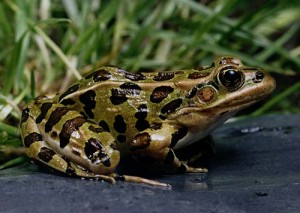 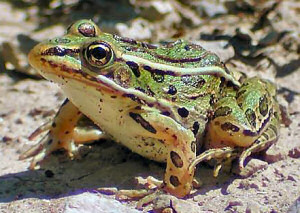 One response to “Northern Leopard Frog”