The sharp shinned hawk (Accipiter striatus), also called Gavilan pajarero (Spanish) and Epervier brun (French), is the small hawk originated from Hispaniola. They are the smallest among the 3 kinds of North American Accipiters. The female raptors are bigger than the male. These birds frequent domestic backyards in urban areas during winter and burst out from bushes to snatch small birds off the branch. 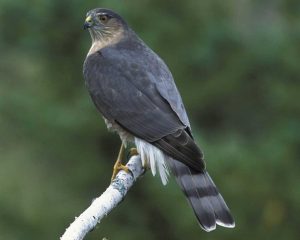 Weight: These hawks usually weigh around 87-218 g (3.1-7.7 oz). Since these female Accipiters are bigger, they have a 50 percent weight advantage over the males.

Feathers and Color: The birds have a “hooded” appearance since the feathers at the back of their neck and on the crown are dark. The adults have slaty blue-gray hue above. On the breast, they have straight, narrow red-orange bars. The juvenile sharp shinned hawk is predominantly brownish and has coarse vertical marks on top of white underparts. 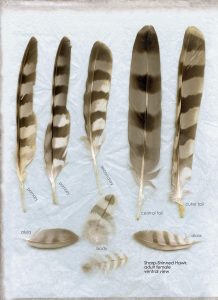 Tail: These hawks have tails with prominent corners with a square, narrow white tip. The external tail feathers are typically the largest. 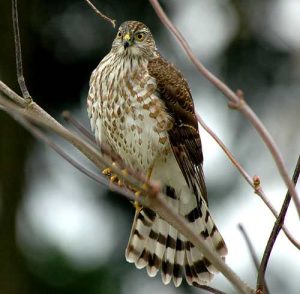 Beak: Their hooked beaks are well suited for tearing flesh of its prey. 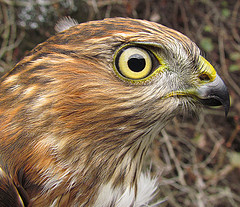 Feet: These hawks have yellow feet and legs. The legs are pencil-like and thin which make them look long. 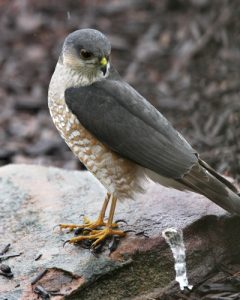 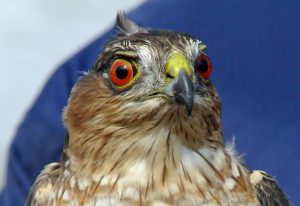 The southern population of sharp shinned hawk is sometimes categorized into three different species –  the rufous-thighed hawk (A. erythronemius), plain-breasted hawk (A. ventralis), and white-breasted hawk (A. chionogaster). The species as a whole can also be classified into the following subspecies:

These hawks inhabit various kinds of forests and woodlands dominated by broad-leaved trees (such as oaks) and conifers. The temperate forests include the biggest populations of these hawks and during winter, they migrate farther south. The subspecies ventralis, chionogaster, madrensis, and suttoni are generally found in temperate or upper tropical highlands at altitudes of 980 ft to 9840 ft. However, the rufous-thighed hawk or A. s. erythronemius occurs in the subtropical and tropical regions.

They are quite widespread in the Greater Antilles, South America, Central America, and North America. The A. s. striatus occurs in North America, including the forested areas of Canada and USA. The resident populations are found in temperate regions of Puerto Rico, Hispaniola, Cuba, Mexico, Canada, and the US. The white-breasted hawk is found in highlands that include Nicaragua, El Salvador, Guatemala, Honduras, and southern Mexico. Plain-breasted hawks are found in central Bolivia, Peru, Ecuador, Colombia, western Venezuela, and in coastal mountains of Colombia and northern Venezuela. Rufous-thighed hawk predominantly occurs in southern and eastern Brazil, southeastern Bolivia, northeastern Argentina, Paraguay, and Uruguay. 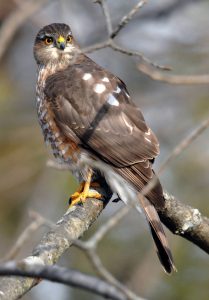 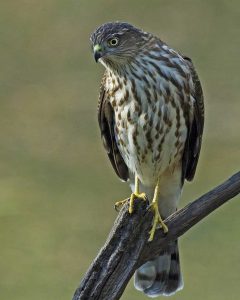 These hawks can migrate over long-distances; however, the populations in Western mountains and the Appalachians may stay there year-round. The birds that breed in Canada and the northern U.S. usually leave their breeding place and migrate to southern Central America or winter in continental United States.

Their diet mainly consists of small birds like thrushes, sparrows, warblers, and American Robins. The sharp shins can eat woodpeckers, swifts, doves, shorebirds, quails, and even the falcons. Occasionally sharp-shinned hawks prey on grasshoppers, moths, and small rodents like voles and mice. The fledglings and nestlings of other birds constitute their babies’ diet.

In flight, the sharp shinned hawk has great agility, being able to speed through the dense forests for surprising its prey, especially the songbirds. They don’t stoop on their prey from an overhead position. They have the ability to pounce on their prey from low perches. In the open spaces, the hawks usually adopt a unique flap-and-glide style of flying.

The females and males communicate with each other with a series of kik-kik-kik calls or a melancholic squeal. These calls are made during courtship. The males usually have louder voices since they’re smaller than females. Mated pairs generally call each other at the time of reproduction, making the nesting period the noisiest. Brooding females and nestlings usually produce a high-pitched, thin call to ask for food when the prey is brought to the nest by the males.

Their excellent eyesight and long middle toes help them in capturing the agile, small birds that constitute their diet. Many ornithologists also think that the notable size difference between females and males is the adaptation that reduces competition for food between the sexes. The female hawks hunt preys that are large enough for the males to tackle. 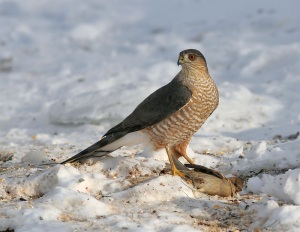 The sharp shinned hawk is known to have some predators including the peregrine falcons, red-tailed hawks, Cooper’s hawks (resemble sharp shin in coloration and plumage), and the marsh hawks.

It has been recorded that sharp shinned hawks live for about 3 years on an average. However, certain individuals may live for over 10 years. Usually the fledgling and nestling mortality rates are quite high, especially during the first winter and fall after hatching.

Sharp shinned hawks’ breeding ranges are completely allopatric, i.e. they occur in non-overlapping or separate geographic locations. Their nests comprise of flat and broad mass of twigs, especially the conifer twigs. The nests are bounded with chips of bark. Although both the sexes equally bring nesting materials, the female takes active part in the construction. These hawks usually favor the conifer trees like fir, spruce, and pine as the nesting sites. Sometimes they may also utilize the hardwood trees and aspens. The breeding pairs generally defend their breeding territory vigorously. The breeding age for the species is 2 years. The territory is displayed and the females are attracted by the males. The breeding behaviors comprise circular flights as well as side-by-side perching together with “peeping” vocalization. 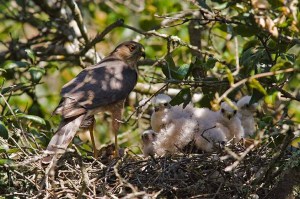 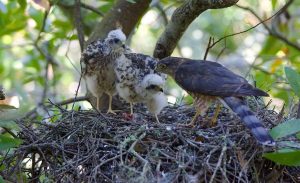 The female lays about 3-6 eggs and there is an interval of 2 days between each egg. The eggs usually have greenish, purple, or bluish-white hue. Incubation starts after the hawk lays the third egg and it persists for nearly 30 days. Although both the sexes can participate in incubation, the female hawks do the larger share of the task. The time taken by the nestlings to fledge is 21-25 days. After fledging, the nestlings remain with their adults for over a month.

The IUCN 3.1 has listed Sharp Shinned hawk as “Least Concern”. But, the subspecies Puerto Rican sharp-shinned hawks or Accipiter striatus venator are termed as “Endangered” by the “US Fish and Wildlife Service” list of threatened or endangered species. 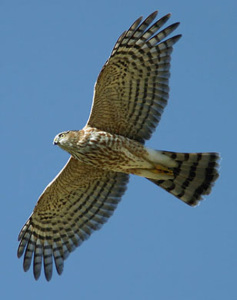 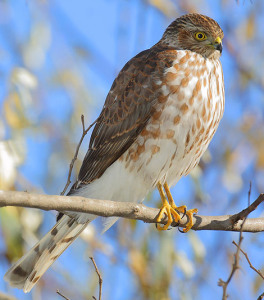