The American Robin is a familiar songbird belonging to the thrush family. These birds signify the arrival of spring for many people around the world. American Robins are found throughout North America. In the winter season these birds fly south and are spotted in Canada, Florida, Mexico and the Pacific Coast.

Popularly referred to as North American Robin, these birds are migratory in nature. Distinguished by their reddish-orange breast, these birds are often sighted in the lawns feeding on worms and insects.

The name of the American Robin has been inspired by the ‘Europen Robin’ which is another red- breasted bird that belongs to a different family altogether.

Proper vegetation, food and water could entice these fascinating birds to your own back yard. 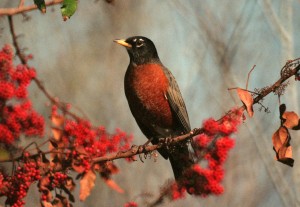 The American Robin bird is measured to be approximately 23-28 centimeters or 10-11 inches in length. It is by far the biggest thrush in entire North America. These birds generally have a dark grayish black with a striking white throat adorned with dark stripes. The color of the head could vary from pure black to gray. It has white eye arc along with white eyebrows.

It is easy to identify the American Robin by the distinguished reddish orange color of its breast. The color of the breast often varies from reddish maroon to a peachy orange, depending on the sub species. American Robins have a yellow bill that is eventually darker towards the tip. These birds weigh around 77 grams in average.

The sexes can be differentiated by the color tone; as the female American Robin is always slightly duller than the male. Females have brown upperparts and under parts that are not as bright in color as in the case of males. Young ones are distinguished by the black spots on their breasts.

These birds are found to be more active during the daytime. Large flocks of American Robins perch in trees during the winter season especially in areas of dense vegetation and isolated swamps.

The birds part ways from the flock during the daytime when they feed on berries and fruits.

These birds are quick in sighting earthworms in the lawns. They run and stop to feed on the helpless prey. American Robins depend on their sight in the act of hunting.

In summer, these species protect and defend their breeding territory. American Robins are very less social.

The diet of the American Robin generally comprises of fruits and berries as well as insects and invertebrates like caterpillars, worms, grasshoppers and beetle grubs.

These birds exhibit an intoxicated behavior after feeding on fermented Pyracantha berries. Sometimes they even tend to fall while walking, after consumption of the berries in sufficient amounts.

New born and young birds are fed on soft invertebrates and worms. 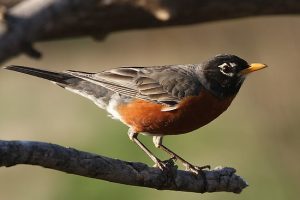 Originally, the American Robin was a strict forest bird but with the passage of time it has adapted to the surroundings of urban areas too. As such these birds can be found in lawns, parks, gardens, farmlands and even roadsides. In general, American Robins are observed to nest in any type of habitat with the exception of marshes.

However, during winters these birds prefer open areas and dwell in orange groves and pinewoods.

This bird has been observed to breed in regions throughout North America, North Alaska, Canada and southward to Mexico and Northern Florida. During winters the Northern population tends to migrate to southern British Columbia, the Pacific Coast as well as south-central United States. The migration of American Robins also leads towards areas of Florida to the Gulf Coast right up to central Mexico. The departure begins from the month end of August. By early spring of February and March, these birds are seen flying north, returning back to Canada or their previous breeding grounds.

It is often rare to spot these birds in areas of Western Europe. A very scarce number have been reported to be seen in Britain. American Robins have also been observed flying over regions of Jamaica, Puerto Rico, Greenland, Hispaniola and Belize.

These migrating birds generally travel during the daytime. The rise of temperature in the spring months is beneficial in the migration of American Robins. These birds have been observed to travel in flocks or in groups of hundreds in rare scenarios. 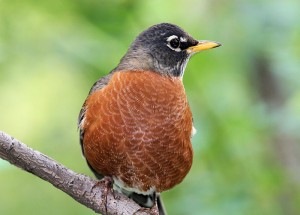 Enlisted below are some extremely interesting facts about the American Robin.

The breeding season of the American Robins occur in early summer, soon after they are back to their summer range. These robins normally stick with each other during the mating period, even though they are observed to mate with other partners in the coming year.

Acts of courtship are noted by courtship feeding which involves the male feeding the female, and ceremonial gaping characterized by males and females coming to close contact and touching wide open bills.

Robins build their nest at a distance of approximately 1.5-4 meters above ground level. It is the female American Robin that plays an overall active part in nesting. Locations like dense bushes or a fork situated between two branches are preferred to build the nest. Sometimes the bird is also observed to be comfortable nesting near human habitations.

The nest is built by the female robin, using coarse or dried grass, feathers, paper and twigs for the external base of the cup-shaped nest. These materials are then lined with the help of smeared mud. More soft materials or fine grass is used to cushion the nest for the final touch.

A new nest is built for each clutch or set of eggs. Each clutch will generally consist of three or four eggs. The eggs are light blue in color.

It is the female robin who incubates the eggs. The incubation period of the American Robin bird lasts up to approximately 12-14 days. During the process of incubation the female bird sits on the eggs for a time period of almost 40 minutes, turns the eggs and takes off for a break. The males are involved in guarding the eggs. The eggs start to hatch by the fourteenth day and the chicks are ready to leave the nest after another 14 days.

Both the male and the female feed the chicks with worms, berries and soft food materials.

There is a time gap of around 40 days before the next clutch of eggs are started, followed by the first clutch of the particular year. Both the parents are involved in the task of cleaning the nest. The chick’s fecal matters are either consumed or carried away by the parents.

The new born chicks are independent and ready for their first flight after four weeks.

Here are some Pictures of American Robin: 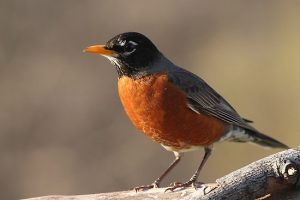 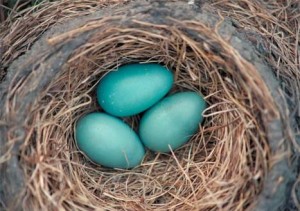 The average lifespan of these birds is approximately 2 years. However some American Robins of the wild are known to have a lifespan of 14 years too.