Blue Whiting belongs to the category of ocean pelagic fishes. It is regarded as one of the smallest cod fish of the genus Micromesistius. Reaching up to a maximum height of 30 cm, this aquatic animal is intermittently available in North Coast of Atlantic Ocean. With a long narrow structure, this aquatic vertebra is considered to be one of the most demanded species for the fishing sector of Europe and Russia.

Color : This small cod fish displays silver color on its body, with a bluish tinge on its back.

Length : The body length of this vertebra usually ranges between 22 cm and 30 cm. However, this fish can extend to a maximum length of 50 cm. Among the three dorsal fins present in the aquatic body of this vertebra, the gap between the second and third fins is more compared to the distance between the first two dorsal fins. The average length of this fish in the west coast of UK is 31cm. 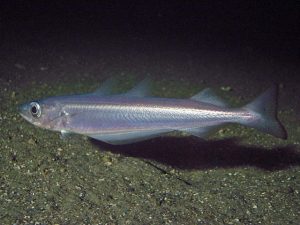 Found near the Norwegian coast, this aquatic animal has no barbell. With a sleek body cover, this aquamarine posses a longer lower jaw compared to the upper one, with long teeth present in both of them. A lateral line running throughout the body distinguishes it from other associates of the cod family.

Considered as one of the ten most fished species in the world, this water inhabitant is available at every part of north east Atlantic sea, encircling Iceland, Spain and Spitzbergen. Dwelling between 50 and 1500 metres, these aquamarines are found in large quantities in Ireland and Scotland, during their spawning period.

This vertebra is suitable for cool temperate zone. Predominant in the Atlantic Ocean, these fishes prefer clean and distinct water that suit their living conditions. Vertical migrations are common among these species and are often witnessed by night divers. These fishes can be found in the entire Norwegian coast.

The aquamarine animal is widely known for diurnal vertical migrations. This particular species is found at the bottom in shallow water. The adult ones migrate to the British Isles every winter.

These aquamarines feed on small fish, pelagic organisms, copepods and krill such as amphipods and plankton crustaceans. It is often found to have food competition with herring and mackerel.

This aquatic animal matures and grows fully at the age of three years. After four to five years, these fishes begin to breed. Once matured, this cod fish spawns in spring and winter waters. 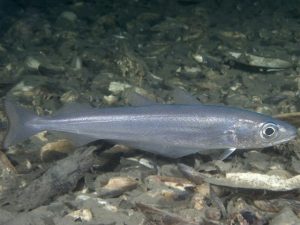 The aquamarines are easily ravened by predatory fishes, squids and marine mammals. Considered as an important marine food, these fishes serve as an important food item for Greenland halibut, saithe, and pilot whale. Blue Whiting is threatened by hazards of over fishing. Since it is a small fish, it is hunted in bulk which increases its life threat to a great extent.

Though these fishes are narrow in size, some adaptive features separate them from other members of their cod family.

This member of the cod family exposes no threat to the environment or human body and hence they are not listed in the World Conservation Union Red-list.

Find out some very interesting facts about this shimmery fish.

Blue Whiting is a small fish and is one of the largely sold aquamarines in the world. Usually found in Atlantic and Mediterranean, these fishes have an average life span of 10 years and are considered as an important species of the fishing industry, growing up to 800gm.

Check out here how this fish looks. 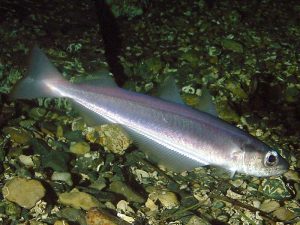 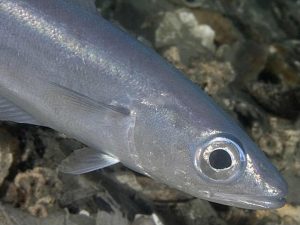