Houndfish is primarily a game-fish that belongs to the Belonidae family. The beak of this fish almost looks like the jaw of a crocodile. That’s why it is also called crocodile needlefish. Houndfish is called by many names in different regions, like Hound needlefish, Aligator Gar, Giant Longtom, Crocodile Longtoms, Seagars, Ocean Piper and Garfish Gar. 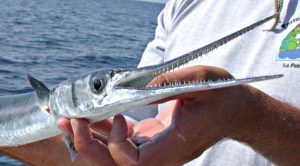 This fish is found in oceans across the world. In West Atlantic region they inhabit from United States to Brazil and in the East Atlantic region, they are found near the African coastline. In the Pacific region they range from the North of Japan down to New South Wales (Australia). They also inhabit the Indian Ocean.

Houndfish prefers to swim just below the ocean surface. Houndfish is generally found in tropical and sub tropical oceanic region where the water temperature is around 25 – 30 degrees centigrade. They are found at the ocean surface going as deep as 12 – 16 meter. This oceanic species are occasionally found in seaward reefs and lagoons as well.

Houndfish feed on anchovies and other small fishes which fit into their mouth. They are also known to feed on small flying fishes. 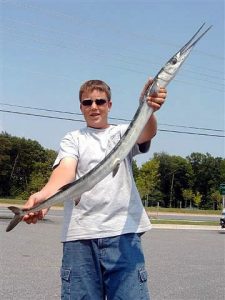 They are generally spotted in small schools. They have a tendency of jumping towards the light in the dark. This species is an egg laying fish. The outer surface of the eggs has tendrils that help it to stick to objects in the water.

Their predators include large Tunas and other large fish species.

This needlefish is popular among occasional game fishers. Sometime, they are also sold in markets. Houndfish is generally caught by using live baits. They have a tendency to play with the bait before actually swallowing it. Most game-fishers consider this species as a catch-and-release fish.

Though they are a very popular game-fish, yet they are considered dangerous as they have a tendency to jump out from the water at a very high speed if they are frightened. They can bite with their sharp teeth. They are known to cause injury to fishermen with their snouts.

Here are some interesting facts about Houndfish-

This fish is not counted among the endangered species of the world. They are not present in the list of International Union for Conservation of Nature (IUCN).

Here some pictures of this needlefish species: 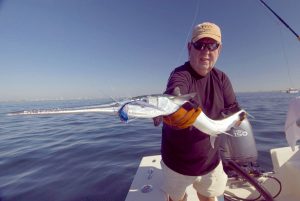 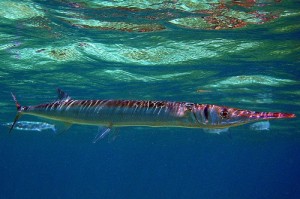