Needlefish derives its name from the elongated jaw and its slender body. It is mostly found in the temperate and tropical waters. They stay at the surface of the water and artificial light at night excites them. They leap out of the water when they are threatened or if they see bright light at night.

Needlefish is a thin fish with elongated body and sharp jaws. Their slender body has silver sides with greenish back. They are generally blue, green with silvery bellies. Their dorsal fin is greenish and the lower portion is golden and silvery glossy. Their distinctive narrow jaw counts for its name being Needlefish. The jaw of the needlefish has several sharp teeth with the upper jaw being slightly shorter than the lower one. The dorsal fin of the needlefish is located near the tail fin. They can grow u to 3cms to 95cms in length.

Needlefish belongs to the Beloniformes family which has 34 species categorized into 10 genera. In Greek, ‘Belone’ means ‘needle’. Halfbeaks, flying fishes and sauries are some of the relatives of needlefish. 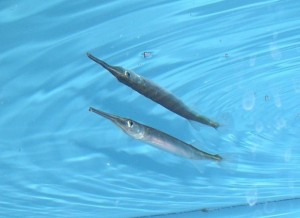 They are distributed between 65 degrees north to 27 degree north and 24 degree west to 25 degree east. Their population exists in India, Pakistan, Nepal, Bangladesh, Bhutan, Myanmar, Cambodia, Indonesia, Laos, Vietnam and Malaysia. A part of their population has also been introduced in Hawaii.

Needlefish are piscivores that feed on small fishes. They stalk their preys and catches them with a sideway sweep with their scissor-like jaws. They mostly feed on shrimps, killifishes, crustaceans, cephalopods, silversides and planktons. Freshwater needlefishes also prey on tadpoles, frogs and insects.

Needlefish breeds in coastal waters during May and June. The eggs of the needlefish are attached by a sticky thread which gets entangled in the floating debris or seaweeds. The larvae are capable of feeding as soon as they hatch. The hatchlings have short jaws of equal length however, their lower jaws grows longer as they mature. The jaws of the needlefish ultimately becomes of equal length when they are fully matured.

Needlefishes fall prey to bigger fishes like Tuna. They are also caught by humans for food.

Needlefish are eaten as food but the green coloration of its bones repels few people.

Needlefishes swim near the surface of the water and jumps outside water when they are threatened or excited by the artificial light at night. Though the needlefish is small, they can pose a threat to the humans. Their activity of leaping outside the surface has lead to injury of fishers. Areas across Pacific Ocean have had instances where the fishermen and divers have been attacked by the school of needlefish jumping out of the water at high speed of 38 miles per hour. Their sharp beaks can puncture the human body and the beak might break inside the body. Such cases have been very rare; however, there have been records of death of two people in Hawaii and Vietnam due to attack by the needlefish. A 10 year old boy in Hawaii was attacked by a needlefish, piercing his eyes and brain. The other victim was a Vietnamese whose heart was pierced by a needlefish. Apart from these fatal incidents, there are cases where people have suffered punctures on various parts of their bodies.

Needlefish have species living in the fresh and brackish water. A freshwater needlefish species, Xenentodon cancila that are native to south-east Asia are kept as aquarium fish. They are delicate and grow up to a length of 30 to 40 cm. They appreciate a large, planted aquarium with a slight heavy current.

Needlefishes are best kept by themselves or with some peaceful species as they react badly to a slight disturbance in the water current. Keeping the needlefish along with the fishes with active movement or swimming mid-water should be avoided as they get stressed easily. Needlefishes are sociable and should be kept in a small school or with other peaceful species like peaceful cichlids, loricariid catfish or sleeper gobies. Active species like tinfoil barbs or silver sharks are best avoided.

Another thing about keeping needlefish in an aquarium is that they show enthusiasm only on live food. Frozen foods are not readily accepted by them.

Needlefishes do not come under endangered or threatened species.

Here are some of the pictures of this amazing fish. 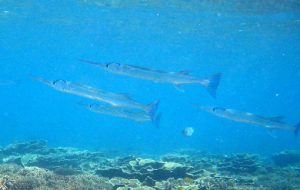 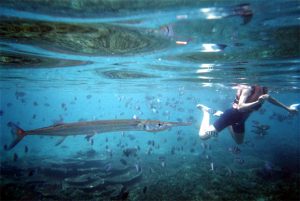