The Alfonsino is basically a member of the Berycidae family of fishes. Temperate and tropical ocean waters throughout the world, excluding the eastern Pacific are home to the Alfonsinos. These fishes are also known to inhabit the New Zealand waters to a great extent.

This fish is also associated with other popular names like Red Beam and Tasmanian Snapper.

Features: The Alfonsino fish is distinguished by its big, prominent eyes and profoundly compressed body.

It has been observed that the female fish is comparatively bigger than the male.

Color: Alfonsinos are a rich rose red in color, complimenting a bright orange lower half. The fins and inner portions of the mouth are generally bright red. As a matter of fact red is one such color that gets easily filtered from the light spectrum. This attribute acts as excellent adaptation of the fish especially in deep water environments.

The Alfonsinos inhabit temperate as well as tropical ocean waters, across the world apart from the eastern Pacific Ocean. In the Australian continent, this fish can be traced off Northern South Wales up to south-eastern Tasmania.

The diet of the Alfonsino fish comprises of anthropods, various smaller fishes and marine mollusks like cephalopods.

Their predators are bigger fishes like sharks. These fishes are also consumed by humans.

The Alfonsino fish has fairly good nutrition content with sufficient vitamins and minerals. As such it is consumed by people across the world. Let us take a closer look at the nutritional value of this fish as per 100 g. 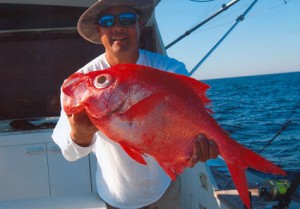 These fishes reproduce by spawning. They become sexually mature after three to four years. The eggs of the Alfonsinos float over the water surface and are ready to hatch after a period of 1to 8 days.

Juvenile Alfonsinos tend to venture more in open waters before exploring the deep waters. These young fishes can be recognized by their little spiny heads and the second dorsal that is slightly stretched.

These fishes are known to have a minimum lifespan of 49 years.

Take a look at some of the spectacular pictures of the Alfonsino fish! 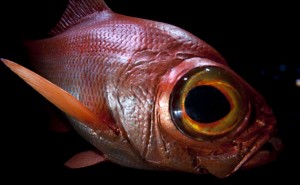 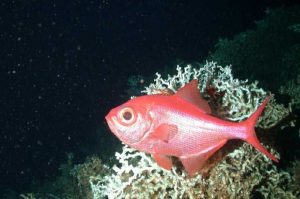