The Amberjack is a large and splendid fish that is found in the Pacific and Indian oceans. This fish species is identified by its beautiful amber colored body. The prominent and distinct ‘bandit’ stripe that runs aslant its eye is one of its most distinguished features.

This Atlantic fish has three specific sub-species; Greater Amberjacks, Lesser Amberjacks and Banded Rudderfish. They belong to the Carangidae family of fishes. 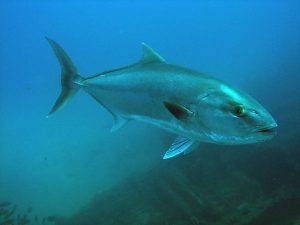 Size: Amberjack is a big fish. These fishes are approximately 2 feet in length.

Some have even been reported to reach a maximum length of 60 inches. Greater Amberjacks are by far the biggest among the three sub species. Some of the largest ones are reported to have a length of 180 cm.

Color: The color of the amberjack fish is rich and beautiful like most sea creatures. This colorful fish has golden and lavender tints along with an amber band that runs from the eye to the tail. Its back is attributed with an amazing olive green or blue color; while the color of the side and belly are a brilliant silvery white.

It is not unusual for these fishes to have an amber or pinkish cast to their body.

The Greater amberjacks are distinguished by the dark that extend from its nose and continues to the front portion of their dorsal fins.

They usually have dark stripes extending from nose to in front of their dorsal fins.

The second subspecies, namely the Lesser Amberjacks are mostly olive green or brownish black in color. The sides of their silverfish body have a dark band that tends to extend in the upward direction from their eyes.

Eyes: Lesser Amberjacks are known to have bigger and deeper eyes as compared to the Greater Amberjacks.

Weight: In average, this fish weighs somewhere around 4.5 – 6.8 kilograms.

The Greater amberjacks can weigh up to 18 kilograms. Lesser Amberjacks, on the other hand have a weight that is usually less than 5 kilograms.

Amberjacks are divided into three sub-species. The three varieties differ in size and color. Let us take a closer look at each of the species.

As the name suggests, these fishes are the largest among all the jacks. Their average weight is a startling 20-50 pounds. The Greater Amberjacks are traced at water depths of 20 to 75 meters.

This fish is identified by the amber-brown stripe right across its nose and the front portion of the dorsal fin. Greater Amberjacks have often been confused with the Yellow Tail Amberjack.

In size, lesser amberjacks are the smallest in the amberjack family. However, they thrive in great depths; 50 – 130 meters under water.

They can be easily distinguished by their big eyes and deep body. Lesser Amberjacks are a beautiful olive green in color; a dark band arises upward from its eyes. 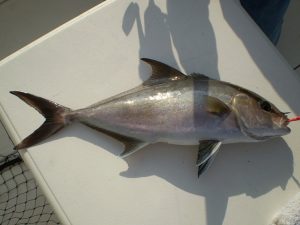 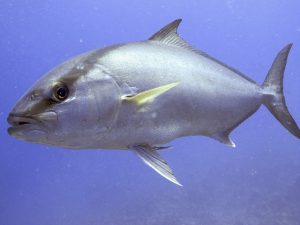 Banded rudderfish can be identified by the raccoon stripe that runs over its eye; it also has a gold stripe at the sides of its body. This particular species are generally found offshore in shallow waters. They also have this trait of following larger animals.

Shrimps and flies constitute a major part of the diet of the banded rudderfish.

Greater Amberjacks are found in debris, rocky reefs and wrecks deep in the sea, some 20-75 meters. The Lesser Amberjacks are to be fond even deeper at 50-130 meters. Banded Rudderfish can be traced as far as Nova Scotia.

Amberjacks are common to most of the tropical and subtropical seas of the world. These pelagic fishes can be found in almost all of the Mexican waters including the ones around the oceanic islands. It is not unusual to find these fishes at water levels as deep as 450 feet. 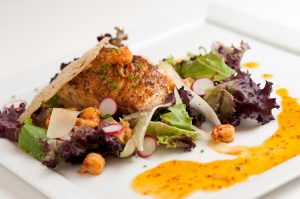 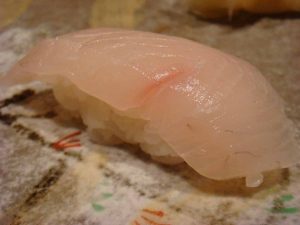 Amberjacks are much feared predators of the water world. They love to feed on fish, squid and crustaceans.

The subtle flavor of the flesh of the Amberjack fish is loved and devoured by people throughout the world. There are numerous amberjack fish recipes available online as well.

Given below is the nutritional value of the amberjack fish as per one serving of a quantity consisting of 4 oz / ounce. 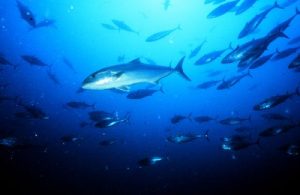 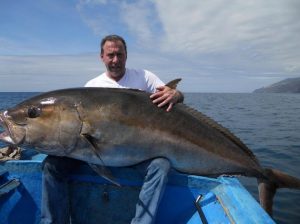 Amberjacks reproduce by the process known as spawning. Aquatic animals reproduce by spawning, wherein they release and deposit eggs and sperm into water.

Not much is known about the wild reproductive behavior of the Kingfish or Greater Amberjack. However it has been observed that Amberjacks usually spawn offshore throughout most periods of the year.

Enlisted below are some startling facts about the Amberjack. 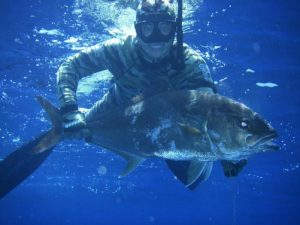 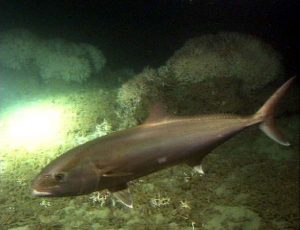 They are currently not on the list of endangered animals.