Blackfin tuna is one of the smallest members of the species of Tuna belonging to the genus called Thunnus and family of Scombridae. They are known by various interesting names like Blackfinned Albacore, Bermuda and football due to its typical football like appearance. Don’t be deceived by their miniscule physical stature as they have an undying fighting attitude which keeps them alive amidst the larger aquatic creatures.

These small tuna have a firm scaly body with a tilted mouth.

The tiny tuna exhibits a mix of colors on its body. White belly is a stark contrast to the back which has mixed hues of blue and black along with silver sides. Big brown stripe above the eye and a golden band along the grey or silver sides set them aside from the other species. Sides of the fishes also contain small dots vertically arranged on them. Absence of yellow and presence of gray ventral finlets and dusky dorsal finlets distinguish them from the yellow fin tuna.

They are commonly found between 28 and 30 inches but they can grow up to 100 cm. Adult tuna generally measure around 50 cm or more. Per month, they grow around 5 to 6 inches.

They weigh approximately 20 kg or a little more than that. 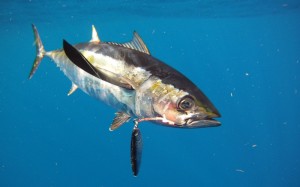 Traces of pigmentation on the initial dorsal fin of the young ones can be noticed. Dorsal and lateral regions have fair amount of pigmentation appearing like vertical lines. They can be distinguished from the other Tuna by the density of gill rakers present in their gills.

Similarly, they can also be identified by their liver’s ventral surface which appears to be reddish in color unlike the other tuna. They also have a swim bladder in their composition.

Range of distribution of these tuna is restricted as they can only be spotted in the West Atlantic Ocean, encompassing Gulf of Mexico, southern Brazil and Caribbean Sea. They are suited to tropical and temperate waters. These fishes are highly prevalent in Florida. They were also spotted in Massachusetts but the population is not very intense.

Blackfins are predominant in the oceans, often going close to the coasts and penetrating deep into the greener water as well.  These fishes love clear and warm water for which they migrate to temperate water bodies with temperature above 20 degree C. During winters and spring time, they densely populate regions off the coast of Florida.

These species travel to temperate waters with the advent of summer.

Compared to other tuna, these fishes do not subsist mainly on big fishes but their diet usually comprises shrimps, squids, amphipods, crabs and stomatopods’ larvae. They feed at the surface level by forming big schools with the skipjack tuna.

The Blackfin Tuna attain sexual maturity by the age of two and their breeding period generally varies according to the regions that they frequent.

Basically during the summers they start reproducing in open seas. They procreate fast and lay their eggs in water columns where fertilization takes place after integrating with the sperm. Pelagic larvae produced by the eggs can be located at a depth of 45 to 50 m.

Breeding season extends from April continuing up to November in different areas. Florida coasts have reported a rise in breeding in the month of May and the same occurs in the Gulf of Mexico in the months between June and September.

Here is the data of nutrition derived from 1 oz of boneless Blackfin tuna.

Some of their behavioral traits are:

These fishes are easily preyed upon by various sea creatures like Blue Marlins, dolphinfish, skipjack tuna and sea birds. They are also threatened by the ones of their own species.

Though these Tuna are small in size but still they have a few adaptive features.

Housing: These Tuna can be housed in large aquariums to allow free movement.

Feeding: They should be fed with their regular food which comprises squids and other small aquatic creatures.

Caring: Water temperature should be maintained above 20 degree C and clear water should be provided.

This species has no impending threat, so they are not enlisted in IUCN or World Conservation Union Redlist.

Mark out some of the interesting features about them.

Blackfin Tuna are small yet fiery fishes inhabiting limited areas of the Atlantic Ocean. They are considered to be a viable game fish for the game fishing industry. These migratory fishes have typical physical features which distinguish them from other Tuna.

Know how the Blackfin Tuna looks from these pictures here. 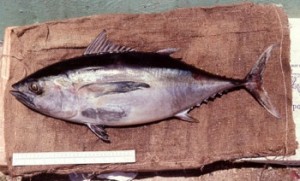