Herring fish comes from the genus Clupea and belongs to the family Clupeidae. There are primarily two species of Herring, Atlantic herring and Pacific herring. Nonetheless, the name Herring is more commonly used to refer to Atlantic Herring. They are abundantly found and are fished for commercial purposes. It is widely eaten by people all over the world. In the United States, Atlantic Herring is sold as canned Sardines, steaks and kippers. They are also used to lure Tuna, Blue crabs and Lobsters.

Atlantis Herring has a few of other names as well.

Atlantic Herring is small in size.

Size: These fishes reach a size of 45 cm.

Weight: These fishes weigh a little more than 500 gm.

Scales: Few of them are said to have pointed scales.

Appearance: These fishes have small head which is flattened. The shape of the body is slim and smooth. They have a lower jaw which projects out and resembles the jaw of a bull dog. The posterior edge of the gill opening is uniformly rounded.

Eyes: The eyes are somewhat covered by a fatty eyelid.

The Atlantic Herrings are abundantly found in the waters of the Atlantic Ocean and the Pacific Ocean, where it is commonly called Pacific Herring. Atlantic herring dwells in the north eastern Atlantic area. They are not found in the Mediterranean region.

Atlantic Herring are aquatic and travel to inshore and offshore spawning grounds. Adult Herring fishes spawn on Georges Bank and travel south western to the mid Atlantic area in search of warmer waters during the winters. They usually return to the Gulf of Maine during the springs.

Herrings stay in coastal waters over the continental area. They live in bays, lagoons and water bodies at depth of 1 to 200m.

Here are some of the adaptive features of this species of fish. 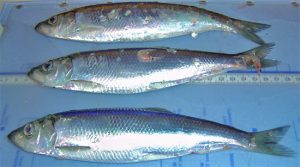 Let us take a look at the nutritional value of these beautiful and delicious fishes.

They mate sometime between midsummer and the month of December. This is the best time for the herrings to spawn. Herring fish become sexually mature when they are around four to nine years old.

The eggs are deposited on rocks or seaweed. It generally takes about fourteen days to hatch. The young ones normally reach adulthood in about four years. Herrings travel towards the shore to spawn between the months of December and July. The female deposits as many as forty thousand eggs on seaweed and rocks.

Fertilization is external. Female Herrings releases eggs and male herrings release lots of milt at the same time. The Herrings become fat prior to spawning, because they feed on the spring blooms of plankton offered up by temperate waters of the Gulf. Mature eggs make up most of the portion of the female’s body mass. The fertilized eggs hatch into larvae in seven to ten days depending on the temperature of the water.

The larva swims towards the surface. Herrings become sexually mature when they reach the age of two to three years. Baby Herrings gain diet from autumn coastal blooms. They are often hastily snatched away from the sea by diving birds like guillemots.

The larvae are about 5 to 6 millimeters long at hatching, with a small yolk sac which gets absorbed by the time the larva reaches 10 millimeters. The eyes are well pigmented. The rest of the body is almost see-through, close to invisible under water and natural luminance conditions.

Atlantic Herring is listed as Least Concern by the IUCN. They are one of the fishes which are abundantly found.

Here are some of the interesting facts about this beautiful silver colored fish.

Here are some of the amazing pictures of this fish species. 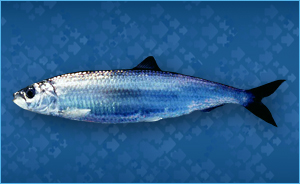 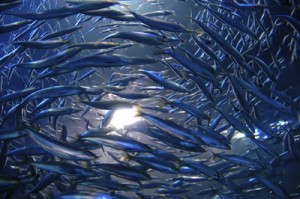